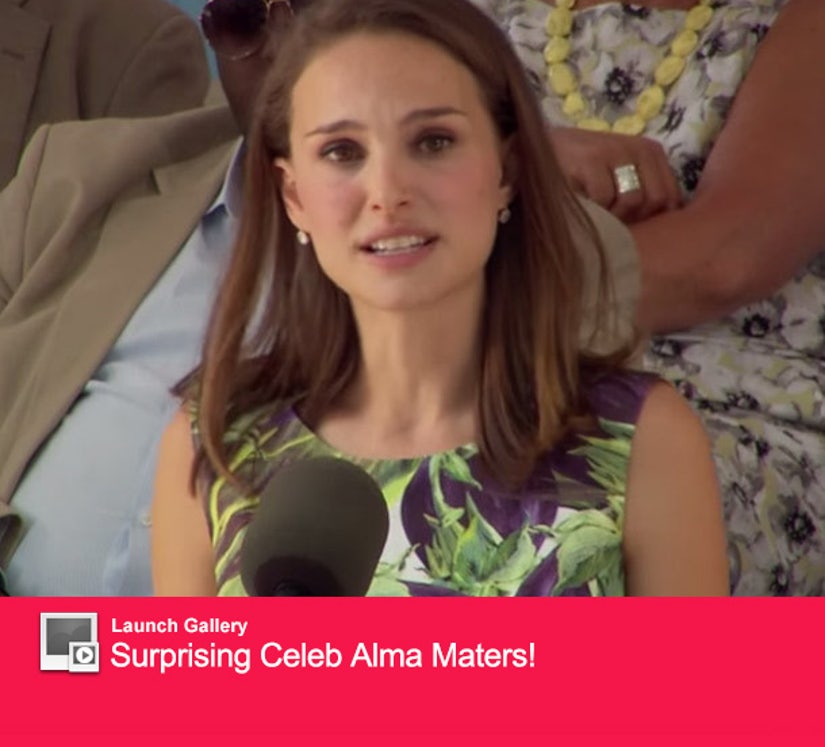 Natalie Portman has some solid advice for college grads.

The Oscar-winning actress gave the 2015 Harvard Commencement Speech at the Tercentenary Theater on Wednesday in Cambridge, Massachusetts.

Portman, who graduated from the prestige university in 2003, managed to throw in a few jokes during her mostly-serious speech. The 33-year-old opened up the ceremony, referencing the WikiLeakes Sony hack e-mail scandal and her own time at college.

"At my Class Day, we were lucky enough to have Will Ferrell as Class Day Speaker and that many of us, hungover or even freshly high, mainly wanted to laugh," Portamn confessed.

"It's easy now to romanticize my time here, but I had some very difficult times here too," she revealed during her candid speech. "Some combination of being 19, dealing with my first heart break, taking birth control pills that have since been taken off the market for their depressive side effects, and spending too much time missing daylight during winter months led me to some pretty dark moments, particularly during sophomore year."

"There were several occasions I started crying in meetings with professors, overwhelmed with what I was supposed to pull off, when I could barely get myself out of bed in the morning," she continued. "I have to admit, that today even twelve years after graduation, I'm still insecure about my own worthiness. I have to remind myself today, that 'you are here for a reason.'"

The "Anywhere But Here" star went on to gush about her adorable son, Aleph Portman-Millepied, who she welcomed three years ago with hubby Benjamin Millepied.

"The other day I went to an amusement park with my soon-to-be 4-year-old son, and I watched him play arcade games. He was incredibly focused, throwing his ball at the targets. Being the Jewish mother that I am, I skipped twenty steps and was already imagining him as a Major League player with his aim, his arm and his concentration," she revealed. "But then I realized what he wanted -- he was playing to trade in his tickets for the plastic crappy toys."

Portman went on to stress that prizes serve as "false idols everywhere," and that not knowing your own limitations will eventually pay off.

"The point is, if I had known my own limitations, I never would have taken the risk. And the risk led to one of my greatest personal and professional achievements," she said, while referencing her own work on "Black Swan."

We think the actress did one heck of a job -- what do you think about Portman's speech?

Watch the whole thing below, then check out the gallery above to see where more celebs went to college!