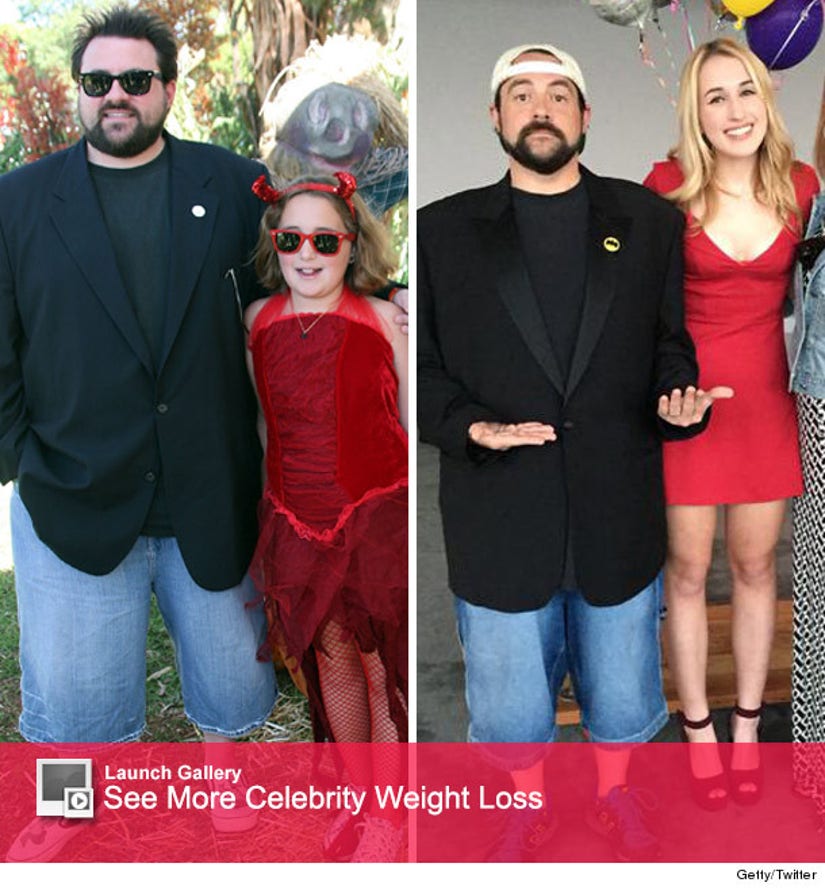 The 44-year-old star took to Twitter to reveal his impressive 85-pound weight loss by sharing before-and-after photos of his achievement.

"Left: me & my kid in 2008. Right: 2 weeks ago, 85 pounds later. I shan't wear pants and will never abort the shorts," he tweeted with the pics, where he's seen posing with his daughter, Harley Quinn Smith.

Smith kicked off his weight-loss plan after he was kicked off a Southwest Airlines flight for being too large for a single seat back in 2010. Smith opened up to Men's Health earlier this year, saying he dropped 40 pounds by cutting out sugar.

"I can't even walk down the drinks aisle at a food store anymore because all of it is just sugar water," he told the mag. "There's nothing there that's not sugar water. I used to be a guy that was like, 'Yeah, I drink juice, man, and juice is natural.' When I stopped drinking sodas and juice and stuff, the pounds just started flying off."

The funnyman also switched up his exercise routine. "My 'working out' is I've got this hill outside my house—like, right outside my house, you walk out the door and—boom!—you're on this hill, so I'll take my dogs out and see who starts breathing heavy and sweating first," he explained.

"I'm not a 'fifty reps' kind of guy. I just walk everyday," he added. "But my buddy, Scott Mosier, he's super fu*king healthy and fit and stuff, and he's, like, 'Maybe you should start working out with a trainer, man.' Which is just so f--king weird to me. I can't even conceive of being in good shape. I can conceive of being thinner, but f--king muscle tone? I don't know, man. We'll see. It'd be nice in this lifetime, before I leave this earth, to see a muscle somewhere on my body."

Keep up the good work, Kevin!