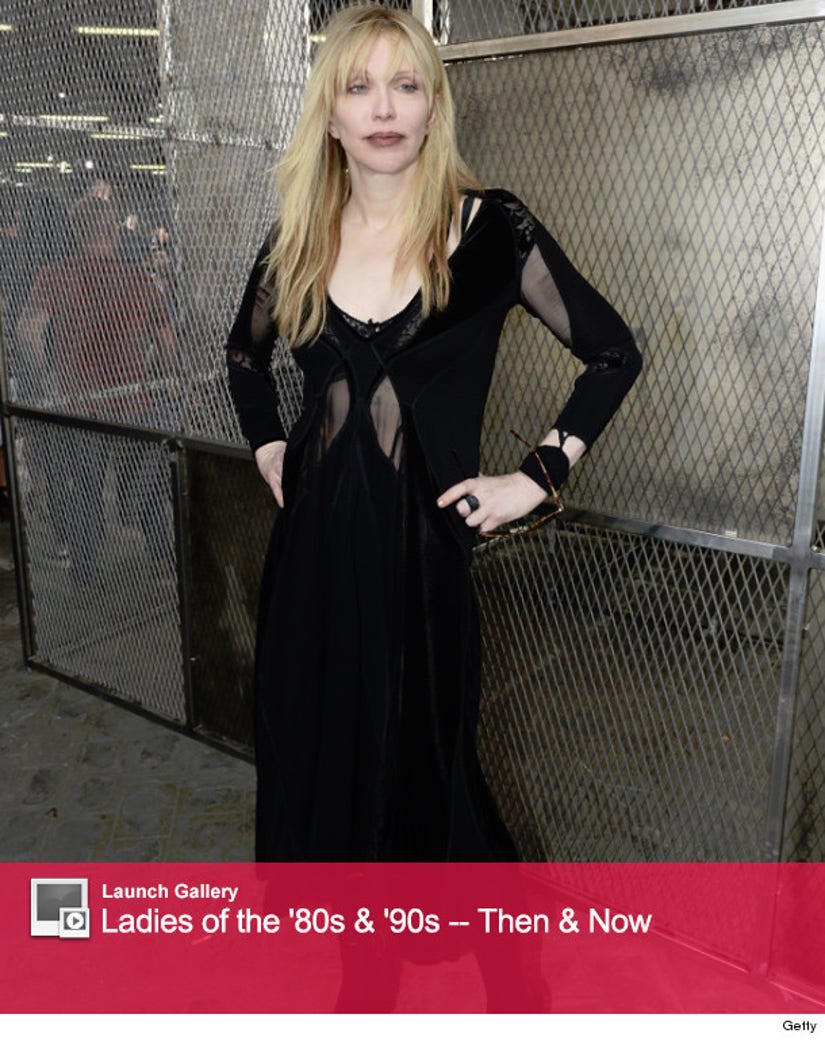 The rocker recently sat down with Harper's Bazaar, where she discusses the problems with plastic surgery and aging in Hollywood, making the move to the big screen and her fashion evolution.

It sounds like Love has been taking good care of herself over the last few years -- she's been keeping fit with pilates and eating healthy on a regular basis.

"There was a period when I got quite heavy, and I had to do a magazine shoot. They Photoshopped the pictures, but I got ahold of the un-Photoshopped versions and put them on my fridge," she tells the mag. "After that I went to great lengths to lose the weight."

"I've really turned a corner in the past three or four years. It began when I decided to get back into acting, and to do that you need to look as good as you can—even if you're aging," she says. "There are a lot of wonderful actresses who are getting older and look fantastic. I want to be in that club."

To her, that means no plastic surgery ... anymore.

"To me, aging gracefully is to let it happen and accept it," she continues. "In my experience, fighting it always seems to backfire and make people look ridiculous. You see actresses get work done and it makes them unrecognizable. I look at these actresses like Diane Keaton, who has never had anything done, and I think that's cool. It's sexy, really."

The 51-year-old likewise enlisted the help of Sean Penn, who she calls her male doppelgänger, to discuss her acting career -- a moment Love says really changed her career path.

"I decided that I wanted to act again after I saw Sean Penn a few years ago in an independent film called 'This Must Be the Place' [in which Penn plays a retired, middle-aged rock star]. I always think that if I were a guy, I would be Sean—he's like my male doppelgänger. But that film lit a fire in my belly. So I sat down with Sean and his agent, and they gave me a bunch of tasks, and I've checked every box over the past three years," she explains.

Courtney says she's been paying her dues, being a good girl and is ready to work her way up that "greasy pole."

"It took me a long time to pay attention to fashion, but now I'm at a pretty conservative point in how I dress," she explains. "I'm into ladylike clothes, like Victoria Beckham's—her dresses are flawless on me. And I love Michael Kors. He was the first designer who was really nice to me, the first one to give me free stuff. He taught me what taupe was, and nude."

The "Doll Parts" singer also reconnected with some of her former A-list pals at Oscar night this year.

"It was like going back to high school and seeing old friends. There are some new kids, but when I see people like Leonardo DiCaprio or Mick Jagger or producers and directors, everyone's like, 'Oh, God, Court! Hi! How are you?' It's like I haven't been gone at all. I met Natalie Portman, and she said, 'I thought we were going to be best friends because I wore barrettes in high school, just like you!' And I was like, 'Barrettes?!' I'd forgotten I did that back in the day," she says.

What do you make of Courtney's candid comments? Sound off below and check out the gallery above to see more women of the '90s then and now!