From pop star to screenplay writer?!

Nick Carter has a brand-new project in the works -- and it's a pretty drastic departure from his boy band past. The Backstreet Boys singer recently chatted with toofab's Brian Particelli at Comic-Con, where he dished all the details about his new zombie western, "Dead 7."

Joined by his wife (and one of the film's future stars) Lauren Kitt Carter at the event, Nick definitely seemed pretty enthusiastic about his latest endeavor, which will see the Backstreet Boys acting alongside a few of the guys from *NSYNC.

Check out the video above to see if Nick plans to direct the movie too!

"Well, it's been in development for the past two years, three years, maybe even longer," he told us about his new script. "It's been a long time coming. I had written actually three scripts and this was one of them and, you know, I was on tour with the guys for the past two and half years. We did 176 shows, so I just finally got done and now that we have some time off I can kind of focus a little bit on all the other projects."

*NSYNC's Joey Fatone and fellow Backstreet Boys singer A.J. McLean have already signed-on to the project and Nick's hoping to enlist even more pop icons for the '80s throwback.

"Well these are all people who I respect and that I want to work with," he says of "Dead 7's" casting, adding that he hopes Miley Cyrus and Sisqo could make cameos.

As for how his wife got a role: "I slept with the director, so you know the old fashioned Hollywood way," she jokes. 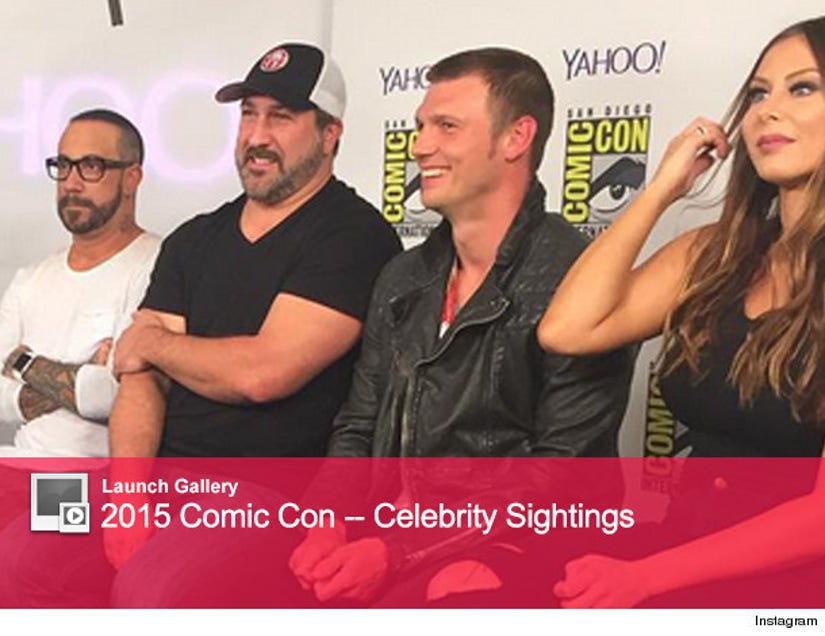 The movie takes place 50 years after the apocalypse and will revolve around an evil shaman who uses zombies to do his bidding. The "Dead 7" are a team of hired assassins who have been recruited to stop the town's evil ruler and restore order.

"We're like bandits, we're hired renegades," Lauren explains. "It's going to sort of be 'Mad Max' but with horses. More futuristic -- zombies, action and shooting each other and all that fun stuff. Bring back the old '80s B-movies sort of thing."

"I want to just keep it interesting enough, not get too cheesy a little bit there but at the same time interesting and entertaining enough," adds Nick.

While they haven't started filming yet, Nick says he'd like to get the movie released by early next year.

What do you think about Carter's new project? Sound off below and check out the gallery above to see more celebrity sightings from Comic-Con!