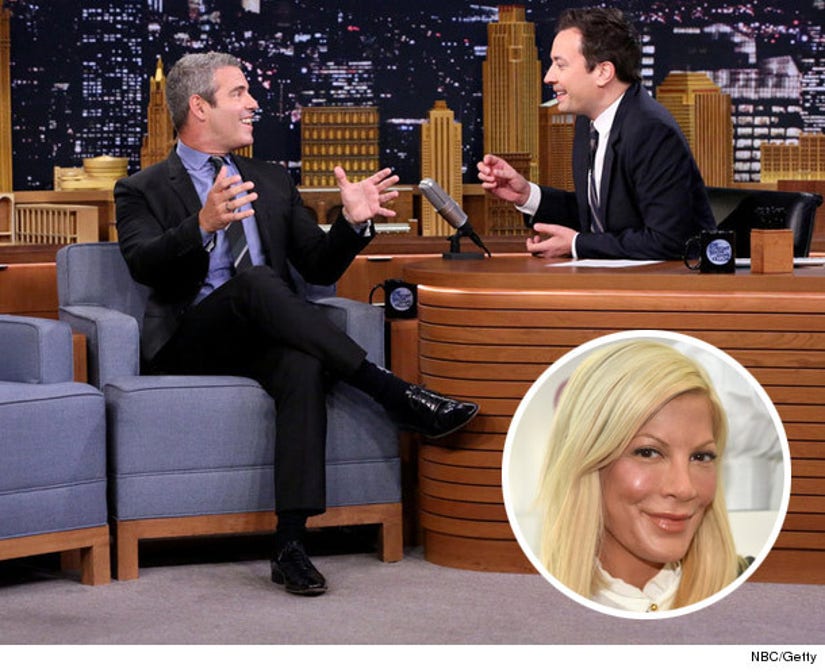 We bet Andy Cohen's shoving his foot in his mouth over this one!

The "Watch What Happens Live" host stopped by the "Tonight Show" on Wednesday and revealed that his often loose-lipped nature got him in trouble with a certain '90s actress: Tori Spelling.

Following the former "90210" star's Benihana burn ordeal, Cohen admitted that he made a somewhat off color joke about the actress on his Bravo show. Tori, who suffered third degree burns, was understandably not pleased.

"I made like a chicken cacciatore joke about it and it was not good," Cohen told Jimmy Fallon. "And I love Tori Spelling she's great, she's been on the show, I'm a Donna fan!"

"She emailed me and she goes, 'Dude, just so you know I really like you and you seem like a great guy but, this is not funny and you kind of made fun of me,'" he recounted. "She went into a very long email about how serious it was and all this stuff!"

Andy replied to the email and formally apologized to the actress for the distasteful jokes, but added insult to injury when he made a small oversight

"I thought it said in the email that she hadn't been able to eat for a week after the burn, and I said, 'Also, EAT SOMETHING' in all caps."

But Tori, who was much angrier at this point, never wrote that in her previous email and slammed the star in another message.

"I went back and read the email and she hadn't said anything about not being able to eat. I made it up. It was terrible!"

Watch the full video above to hear the entire awkward story and Andy's final apology to Tori!