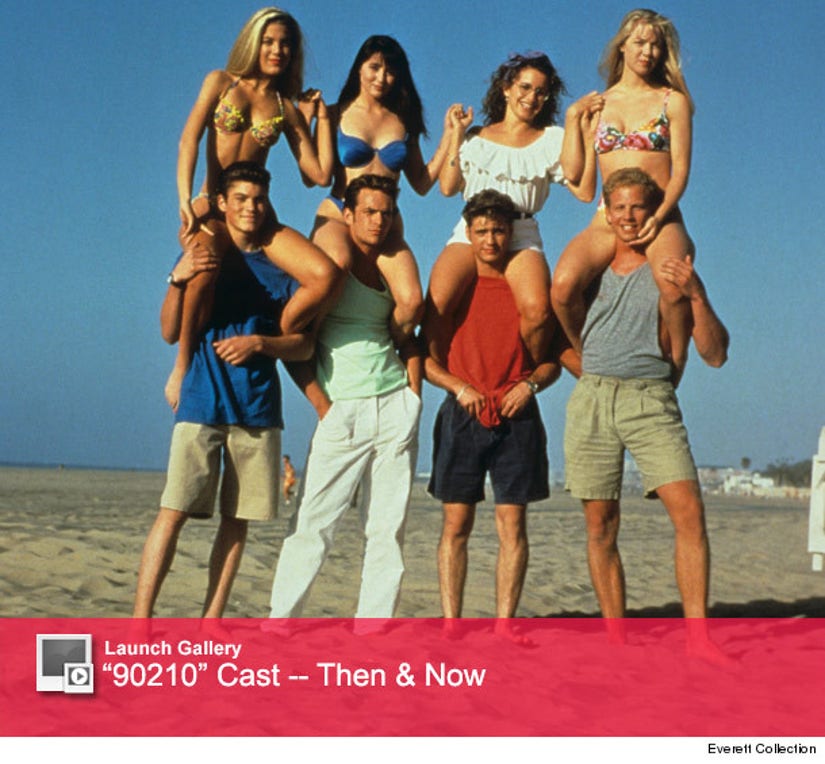 To celebrate our favorite Peach Pit regulars, toofab is taking a look back at the California kids who captured our hearts from 1990 to 2000.

Jennie Garth, Tori Spelling, Shannen Doherty, Luke Perry, Ian Ziering and Jason Priestley have all been so open about all the behind-the-scenes drama -- none more so than Tori, who just took an on-camera lie detector test to reveal some amazing set secrets.

Spelling revealed that she hooked up with more than one of the men from the primetime soap on Lifetime's "Tori Spelling: Celebrity Lie Detector" on Saturday evening.

"I was a young girl, Brian [Austin Green] and I were the youngest, we were 16 and I remember the first time I shook his hand, I had that ... I fancied him," she admitted, adding the two were very much in love when they had sex.

She also revealed she got wild with Jason Priestley.

"It was a summer fling, it was off set, it was our version of a summer romance," she revealed. "The 90210 version. That was it, we stayed great friends for the rest of the run."

But no, she didn't lose her virginity to either of them -- instead, she lost it to a "normal guy, not in the business." She added that she got her own blood on the dress that night and Shannon ended up wearing the stained dress during a cast promo shot for the first season!

FYI, this is the pic: 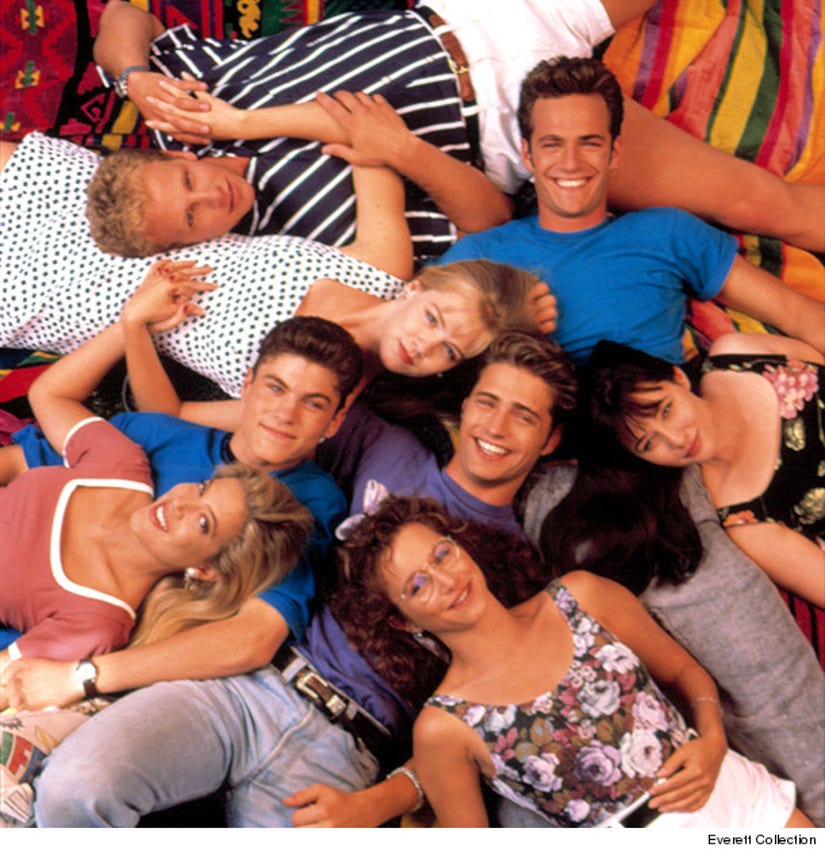 Other tidbits she revealed during the hour long special:

- She was cast in the series because of her dad, Aaron Spelling.

- Tori and Brian wrote their character's vows for their wedding on the series finale.

- Jennie Garth and Shannen Doherty had a real, physical fight on set -- "I was told, 'The boys just had to break up Jennie and Shannen, they were about to get into a fist fight.' I think it was like a fist fight."

- Spelling admitted Doherty could be "unprofessional" at times and her personal life "crossed over" into work a lot. "Was she a horrible person? No."

- When asked if she thought Shannen should have been fired from the show, Spelling said "as a coworker, yes."

- As for why Shannen got fired, she said the entire cast ganged together and decided she had to go after a day of waiting around for her to show up on set. "Hours were ticking by, Shannen runs in, and everyone's turing and looking. They're so mad, I knew someone was gonna say something."

"Ian turned to her and said 'You are a C-U-N-T. Can't. Understand. Normal. Thinking.' One of the guys called us all into their dressing room, said 'This is it.' I remember them saying, 'We decide as a group, we make a decision right now." They all called up Tori's father and told him their decision -- but Tori says she did not want to be part of the final vote.

- She says she has not had more than 10 plastic surgery procedures. "I've had my nose done and I've had my boobs done," she confirms.

- Tori only got $800,000 of her father's fortune when he passed away. "It still confuses me, because I know he worked so hard and I don't really understand the thought process behind it," she said. "All I could think is he just assumed we would be fine."

- Was 'True Tori' real? "Every bit of it," she said. "It was the hardest time of my life. If it hadn't of happened, we might not be together today. We both were not functioning, we weren't communicating, we weren't going to be O.K. You can survive things like this, but you have to be willing to do the work."

- When asked if she's fully forgiven Dean, she said "Yes" -- but was called out for lying. "I'll never forget, I guess the truth is that my mind has forgiven him, but obviously my heart hasn't."

The drama doesn't stop there -- click through the gallery above to find out who was charged for hitting a child with a car, which star won an Oscar and who just had a very public split.