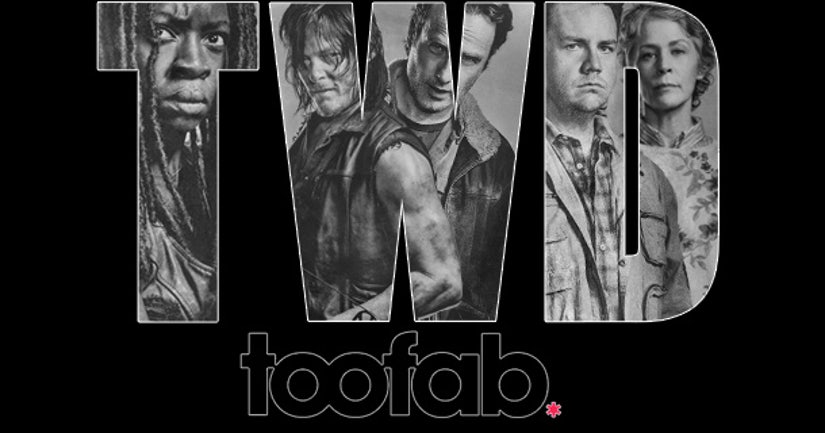 It's been nearly seven months since "The Walking Dead" wrapped up Season 5 with one explosive finale -- and the season premiere was definitely worth the wait.

For all you newcomers, we'll be recapping the show every week on toofab, all season long, rehashing the best moments, goriest zombie kills and checking in with the show's stars to answer some of your biggest questions.

The best part? Eugene himself, Josh McDermitt, will once again be a regular fixture this year, giving us some behind-the-scenes insight into what really goes on on set.

So, welcome back -- ready to dive into the premiere? Warning: Spoilers Below! 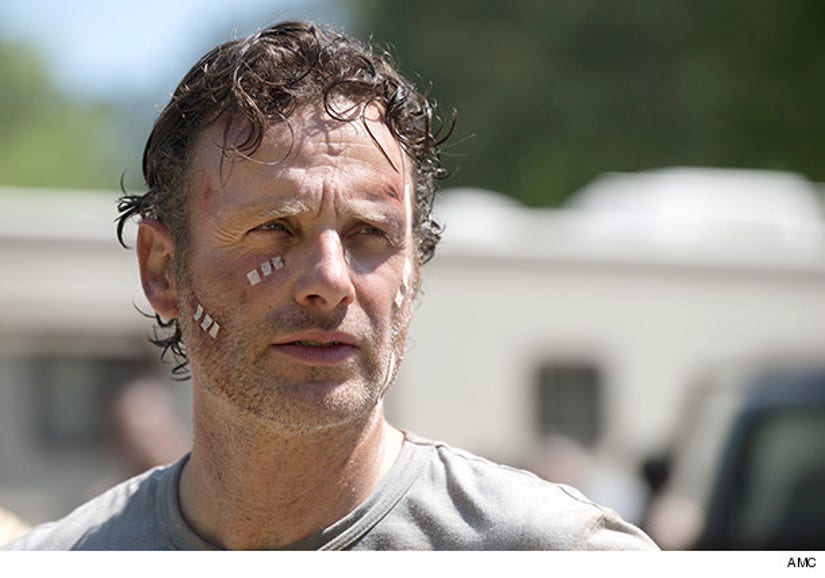 While "The Walking Dead" has been jam-packed with flashbacks in the past, the show really doubled down for the premiere.

"I was told the reason we went black and white was to make it easier in telling the story," McDermitt reveals. "They toyed around with the idea of over-saturating the look of the flashback so people could clearly see the difference between past and present. Even when we were reading the script, it would sometimes get confusing as to where we were in the timeline. I like the idea of black and white for the flashbacks for this episode. There was an eerie calm and quiet with these scenes."

In the B&W scenes, we saw the aftermath of Rick's showdown with Pete, as the people of Alexandria slowly (and stubbornly) came around to Sheriff Grimes. We also saw Rick discover a ravine full of walkers -- a terrifying sight -- located precariously close to their new community.

Clearing out the ravine and attempting to divert the horde away from Alexandria was the main goal for everyone this week, though it took some time (and a little brute force) to get everybody on board.

Rick clashed most with Carter, played by Ethan Embry. Carter voiced his opposition to Rick's plan during a community meeting, and then hatched a secret plan to kill the new man in charge. This didn't sit well with Rick, who interrupted their assassination session.

"You really think you're gonna take this community from us? From Glenn, from Michonne, from Daryl, from me? Do you have any idea who you're talking to?", he asked, holding Carter at gunpoint. "You can try to work with us, you can try to survive, would you do that?" 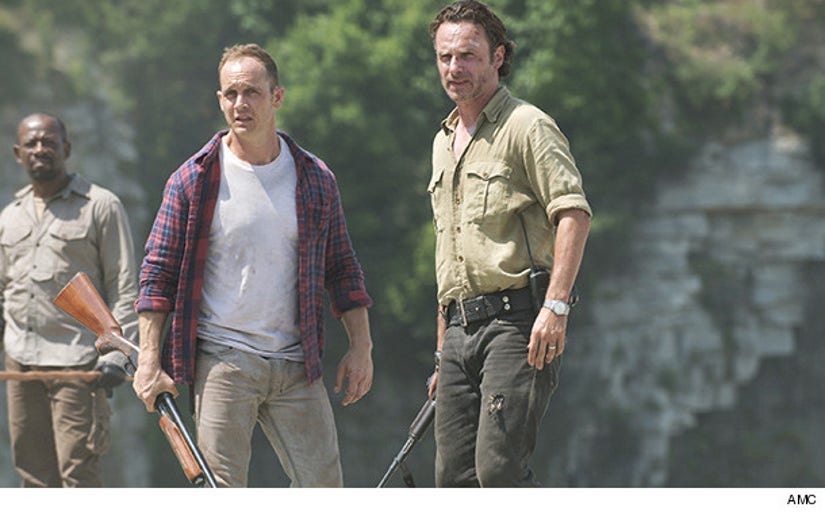 Carter got on board with the plan -- but, in a shocking twist, he still got killed off.

While attempting to divert the horde, he got his face ripped off by a walker in the woods -- and was then put out of his misery by Rick, who stopped him from attracting more zombies with his screams by putting a knife through the back of his head.

"I was a big fan of Ethan's long before he ever stepped foot on set with us," says McDermitt. "It was a joy to be able to work with him and we were all sad to see him go so quickly. He told me that he and his friends get to gather every Sunday to watch 'The Walking Dead' and he was going to try to keep everything a secret from them. I loved hearing that. He stepped right into our show and it felt like he'd been working with us for years. He was amazing."

He'll definitely be missed -- we were VERY surprised to see Embry last only one episode. 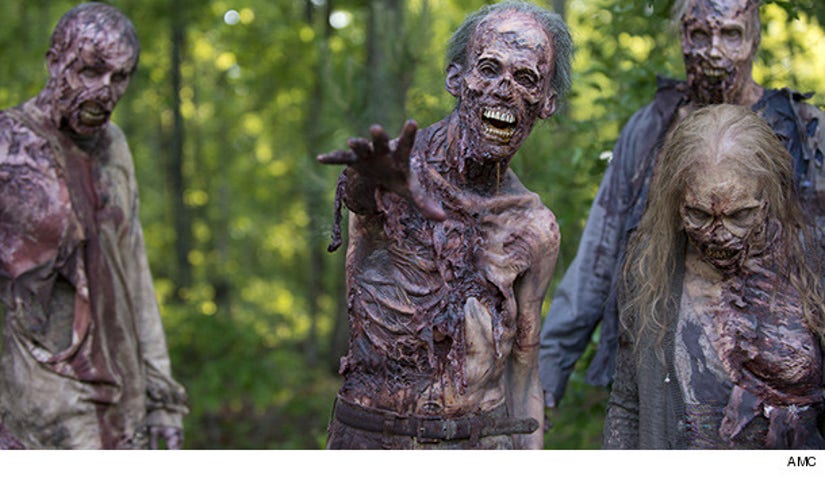 After Carter's death, a siren started going off near Alexandria. 2/3 of the undead herd changed direction and started walking towards the community -- the final shot showing how royally screwed the living are with the sheer number of zombies lumbering their way.

"Well we definitely didn't handle the herd, so for sure we're going to see how we deal with that in the upcoming episodes," teases Josh. "It's been incredible to see so many zombies around set. Usually I'm one of the first to show up on set because I gotta wrangle the mullet! But this season all of the special effects folks show up an hour before I get there. That's how I know this season is bigger than ever. It's also hilarious to see a bunch of zombies turn a corner and then it's just a conveyor belt of zombies rolling through a field for 10 minutes. The zombies are the true stars of the show, so any time we can bring more of them into the fold I'm all for it."

This was definitely the most walkers we've seen in one place since the show's premiere -- and the Alexandrians have their work cut out for them going forward. 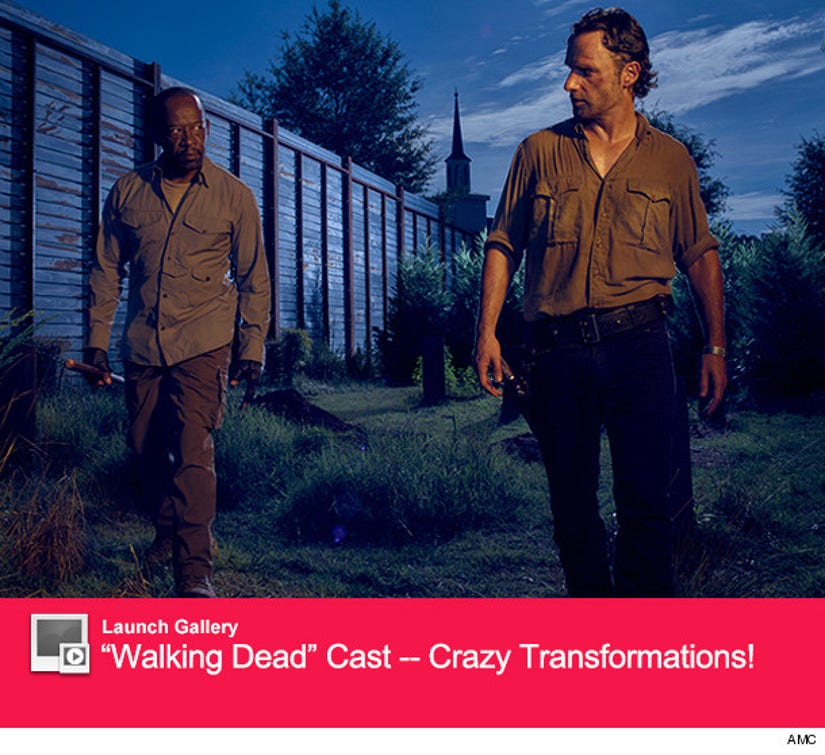 One thing on their side: Morgan.

After he showed up in town at the end of last season, Rick spent the episode trying to figure out if he can still be trusted.

In the end, he invited Morgan to move in with them. "I know you Morgan, even if this is the first time," explained Rick. He then went on to explain how the Alexandrians "shouldn't be alive now," meaning they aren't prepared at all to exist in a world with walkers. They've been lucky with their situation, but aren't ready to fight. Morgan, thankfully, is skilled with a bo staff and can kick some serious ass.

"Lennie James is the MAN. Watching the TWD pilot episode, I was instantly drawn in by Morgan," McDermitt says of the new addition to the group. "It's extremely intriguing to find this guy again so far from where we last saw him. It's such a fun thing to watch Lennie work. And to watch Rick and Morgan go toe-to-toe has been pure joy. I actually headed to set a couple days I wasn't working just to watch Lennie work and I don't regret any second of it."

It'll be interesting to see how these two work together -- or possibly, against each other -- going forward. 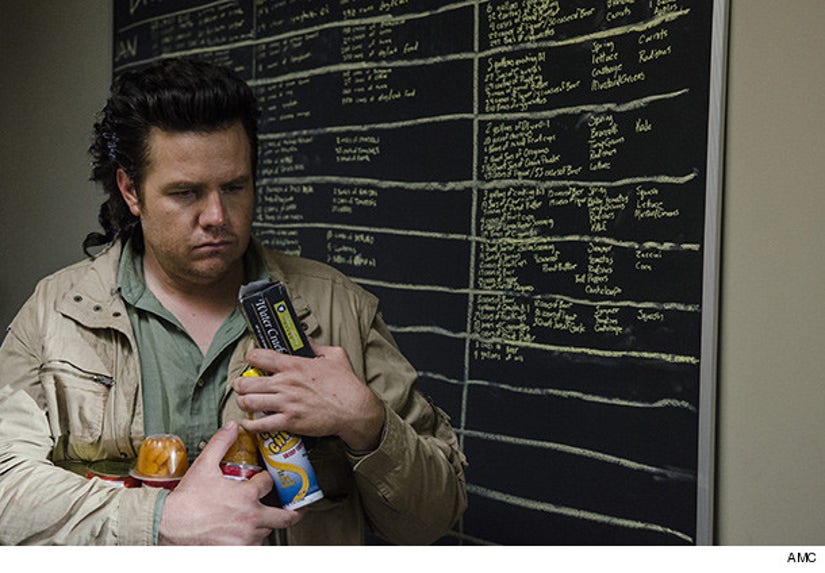 "I think this world is so big and the cast is so big that we're always bound to get paired up with other characters. And for the cast it is bittersweet," Josh says of the group dynamic this year. "There is something exciting about working with someone new -- with someone you may know very well outside of work, but as a co-worker you know so little about. We are a giant family and I love working with everyone, especially if we're in huge scenes together."

"If I had my choice I would rather be split up. This would give us a little more to do. But will season 6 feature more of that? We'll see... we're just getting started," he teases.

Other interesting tidbits this episode:

- Daryl and Rick might face off soon, as they can't seem to agree on whether or not they should continue scouting new people. Rick is worried about the Wolves, telling Daryl any survivors out in the world "gotta take care of themselves" now.

Daryl, on the other hand, thinks "taking care of ourselves" should include growing their community -- but tells Rick it's his call.

Do you think the Wolves may have been the ones who set off the alarm, to lead the zombies towards Alexandria?

- After ending Season 5 on a depressing note, Sasha is back in action and ready to fight. Both Sasha and Abraham are seen struggling with their emotions, but agree they want to keep on living. Thankfully, it seems like Sad Sasha is gone for good.

- Glenn is a really good guy -- and shocks everyone by keeping Nicholas around after the guy tried to kill him last season. "Glenn saves people," Maggie explained to Tara. "I couldn't accept it either, but then I thought about you, how we were on different sides of that fence on the worst day of my life and now you're one of the most important people in the world to me. Things can get better."

Hopefully, Glenn's decision to try and trust Nicholas doesn't come back to bite him in the ass. 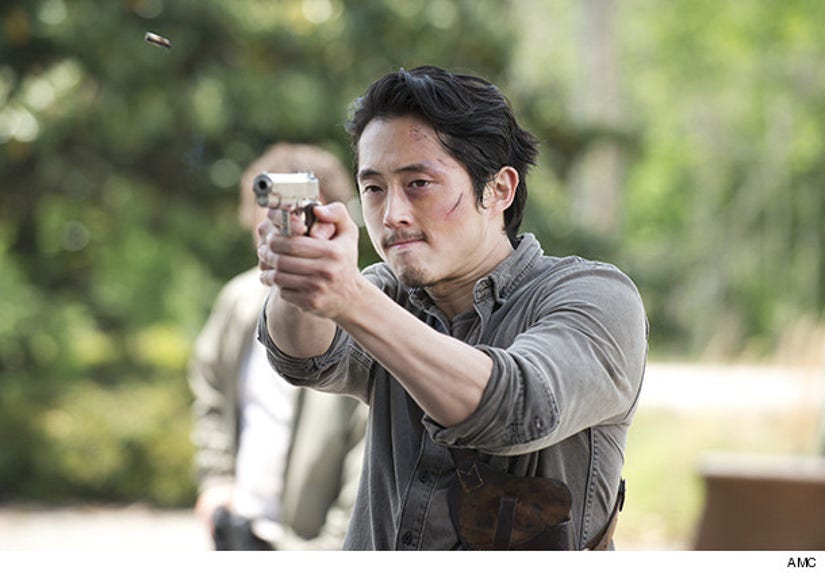 What did you guys think of the premiere? Leave us some questions for Josh in the comments below -- maybe we'll ask them for next week's recap!