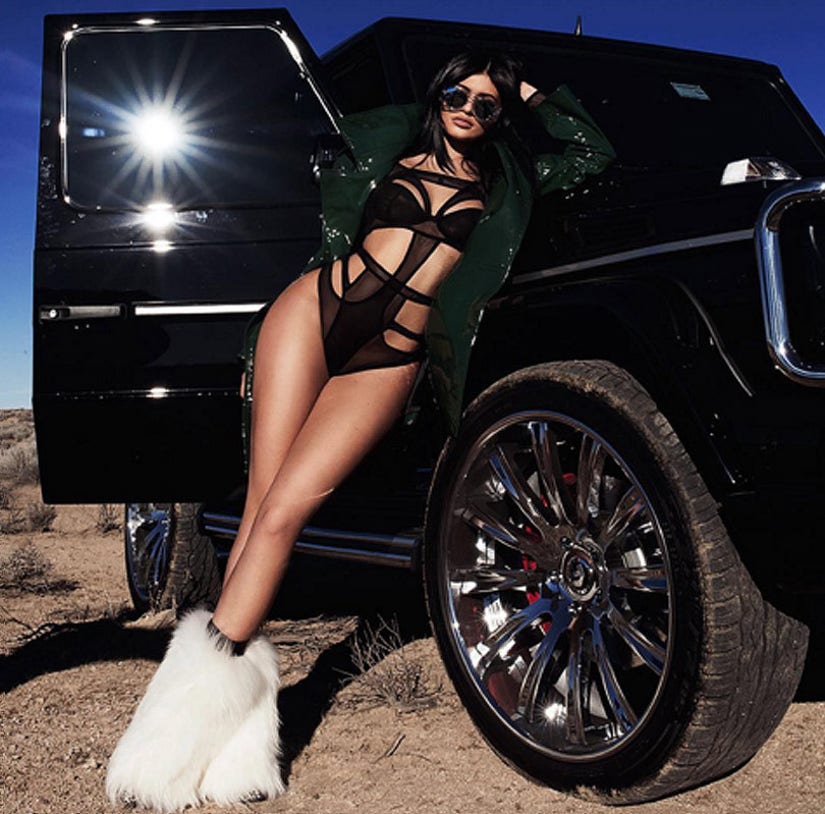 Kylie Jenner is really feeling herself!

The 18-year-old is the star of a sexy new desert-themed photo shoot which she debuted on her website, app and Instagram on Thursday -- and she's showing a whole lot of skin in the hot pics.

In her first look, the "Keeping Up With The Kardashians" starlet shows off her bod in a tiny bodysuit which features sheer panels and tons of cut outs. She also rocks a green patent leather coat, furry white boots and huge sunnies as she leans against a Mercedes G Wagon.

The teen posted the exclusive shoot as a thank you to her fans for helping her reach 40 million followers. Naturally, King Kylie wears a crown in another photo along with a mesh top, as she shows off her famous pout.

"40 million followers???!!!!!!!!!! Wow. That's a whole lot of people. I put up an exclusive @sashasamsonova shoot in honor of my dope ass fans only on TheKylieJenner.com and on my app," she said of the pic.

For her last pic, the reality star keeps things playful in a high-waisted red latex skirt and a mesh white top as she pours out a can of Coke. The star rocks tons of bangles and a bold red lip.

Earlier this week, Kylie announced on her site that she had come to a strange revelation, and hinted that she might be changing up her signature look sometime in the near future.

"You know what's weird? I've been into small lips lately," Kylie said during a makeup tutorial to her artist Joyce Bonelli. "Like, I want them to look small."

What do you think of the sexy shoot? Sound off below then click "Launch Gallery" for more of Kylie's best photos!