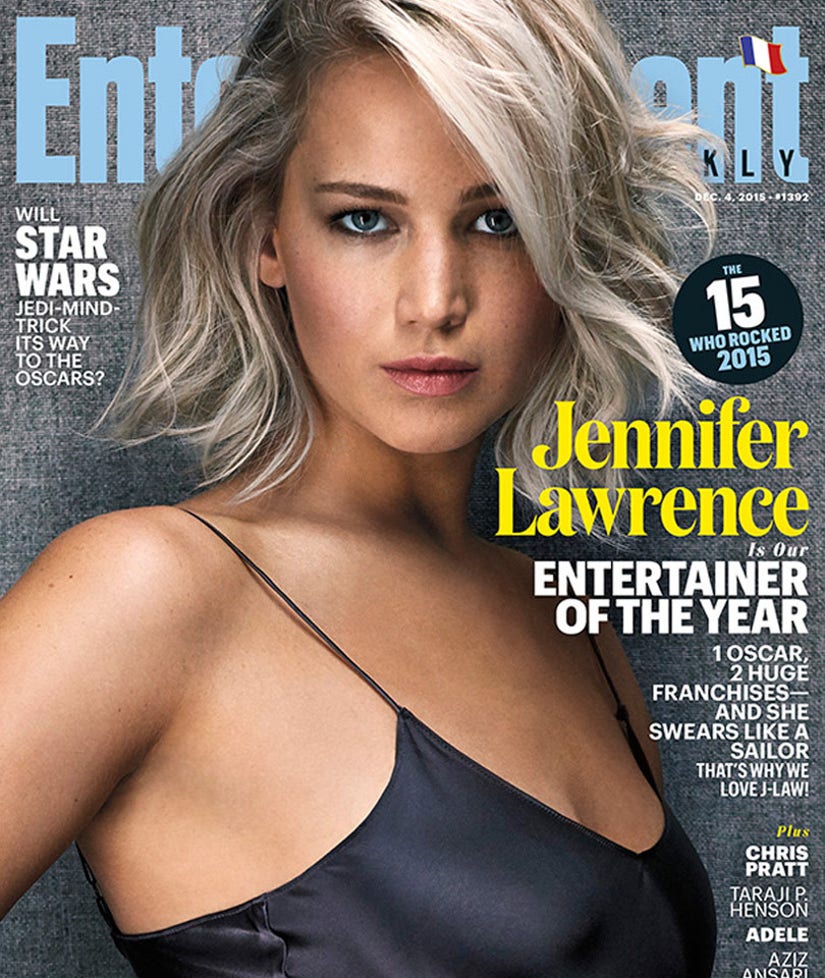 Jennifer Lawrence has had an amazing year!

The Oscar-winning actress covers the new issue of Entertainment Weekly, where she's named the magazine's "Entertainer of 2015."

From saying goodbye to her beloved "Hunger Games" character, Katniss Everdeen, to reuniting with "Silver Linings Playbook" director David O. Russell for "Joy" -- at only 25 years old, J.Law has solidified herself as Hollywood royalty.

"It's crazy…I signed on to these projects when I was 20 years old," she says of the "Hunger Games" franchise.

"I remember being like, 'Oh my God, I'm going to be 25 when I'm finished. It seemed so far away. It does feel over. It didn't for a while and I didn't think it would ever sink in, but it has now. It feels over," she reveals. "And that's okay. It's okay to move on."

And while she's ready to move on, she's leaving the franchise with some solid friendships. "There's just crazy s—t you would never tell anybody, but you do because you're sitting on a set together for 16 hours a day," she says of her costars (via E!). "Josh [Hutcherson], Liam [Hemsworth], Woody [Harrelson]—we know each other. These people know more about me than anybody on the planet!"

The blonde beauty also opens up about working with David -- the two have teamed up for flicks like "Silver Linings Playbook" (which won Jen the Oscar for Best Actress in 2013), "American Hustle" and their latest collaboration,"Joy" -- and it definitely sounds like we'll continue to see Lawrence in many more of Russell's movies!

"David and I will never ever ever ever not do movies together," she confesses." I love him so much that sometimes I can't talk about him without tearing up. Look! I'm tearing up. I understand every look, every eyeball move, every word he says or doesn't say. We were made for each other."

Lawrence likewise dishes on the new screenplay she's working on (and plans to star in) with BFF Amy Schumer and the comedienne's sister Kim Caramele -- and we're definitely excited to see Jen show off her comedic chops!

"They are the funniest motherf—kers that ever lived," the actress declares. "They're brilliant writers, too. And fast! The script is pretty much good to go. We work really well together—it's been the most fun thing ever! All I do is laugh."

While J.Law admits that she'd like to get back to working on smaller projects, she says she'd also like to try to direct one day too.

We're excited to see what the talented actress does next -- what do you think about Lawrence's candid comments? Sound off below and check out the gallery above to see even more sexy stars!