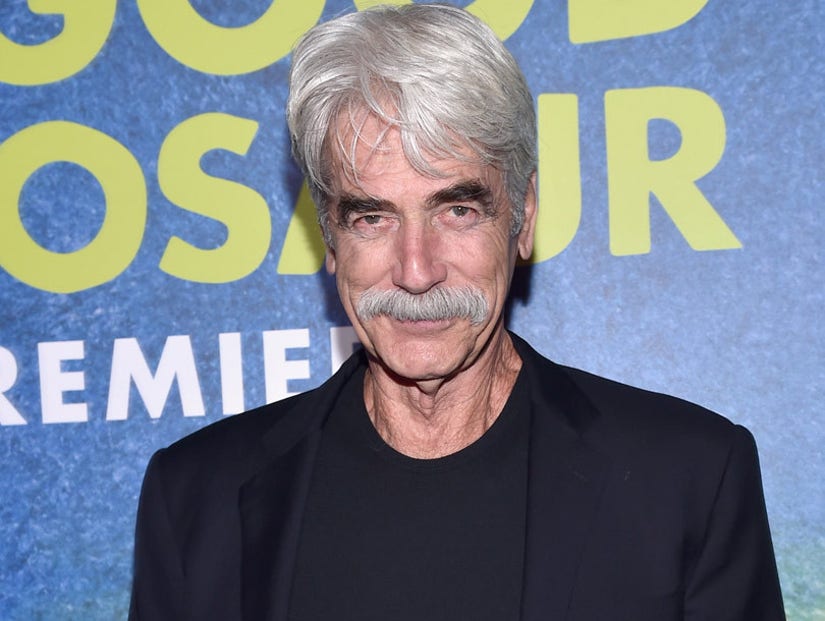 For a man who's perfected the art of playing rough around the edges, cowboy types, Sam Elliott puts a new spin on the Western typecasting that's made him famous in the new Disney/Pixar film "The Good Dinosaur."

Lending his famous deep drawl to Butch, the patriarch of a group of T-Rex cowboys, the 71-year-old "Justified" star's voice is hard to miss in the family flick.

Check out the full interview below to hear about the actor's biggest regret and the moment in his life he really thought he was a "f--king goner."

toofab: You've done a lot of cowboy roles in the past, but this time you're a dinosaur cowboy. How fun was that to switch it up?

Elliott: It was totally bizarre, but also great fun at the same time. I hadn't really thought about that!

toofab: What was it about the story that really sold you on this film?

toofab: How does it feel to be part of this Pixar family now?

Elliott: I think my head's spinning a little bit from it still. I've had a number of gifts laid on me in my career. And the last year and a half between "Grandma" and "I'll See You In My Dreams" and "Justified," and now I'm doing this thing over for Netflix which is a four camera show shot in front of an audience on Friday nights, that's a whole other world I never even thought I would get near!

toofab: I saw on a recent interview you said that you still really want to do theatre too ...

Elliott: I tell you what I'd really like to do; I'd like to do a musical some time. That's what I would really love to do. I had an opportunity one time to go do a musical with Reba McEntire, "Annie Get Your Gun." It was on Broadway and my daughter was growing up at that time and we sat down and talked about it. I wasn't set for it, but I was going to go in and audition. I met Reba on a show called "Buffalo Girls," it was a television thing and I had this opportunity to go audition but didn't go. I had the score, I worked on the songs, but I didn't go and I think it's one of the few things I look back on now with a certain amount of regret.

toofab: Something might come to you if you keep talking about it!

Elliott: I did a New York Times piece and she made some mention of me wanting to do a musical and it was like two weeks after that I got these phone calls from my agent from people in New York and I was like "Really?!" Got to be careful what you wish for.

toofab: As a parent, how did this film resonate with you?

Elliott: I've loved doing family fare. I've been fortunate in my career that's been sprinkled all the way through it. I embrace it completely and feel like it's just a gift when that kind of stuff comes along. It's one thing to be doing the dramas and all of that s--t, but it can be something that the whole family can go see. And I think particularly doing an animated film, it just crosses all boundaries.

toofab: What's the biggest challenge for for voice work?

Elliott: It's a very free and kind of no pressure experience to do this kind of stuff compared to dialogue. Dialogue has always kind of been a bit of a struggle for me, remembering it. I had to work real hard on it. And I think the older I get, the harder and more difficult that becomes on some levels for obvious reasons. But it's always been a bit of a struggle for me. This, you got it on a page and it's right there in front of you, and the trick becomes just giving the director what he wants.

toofab: Lastly, the big theme is overcoming your fears, do you have a fear you were able to overcome?

Elliott: I've had experiences where I've had the s--t scared out of me, but I didn't have fears that I had to overcome. I was always a bit of a daredevil. I was a tree climber, a rock climber, and I was into stuff that made my mom think 'Ahh!' Not to the degree that people are daredevils today. It's a whole other world now.

I had an episode one time when I was in Montana and I was fly fishing. I was 13 years old, I was up there on a trip with a retired trapper and his wife. I was fly fishing and working this stream on foot and I was on a gravel bar. There was a fairly good current and I stepped off of the side of this thing and it went out from under me. I had a pair of boots on and they filled up with water right away and I was in water over my head and I thought for sure I was a f--king goner. I can remember seeing the water close over my head and thinking, 'F--k!', and I just remembered to do all that s--t you know how to do, go downstream and go on a diagonal to the shore -- both of my parents were lifeguards and we were always in the outdoors because of my dad's background and his work.

I learned early on if you ever fell in a f--king river what to do, kind of bouncing off the bottom and coming up for air for quite a ways. It scared the s--t out of me. I went back there two days later and found my fly rod. I got my rod back!