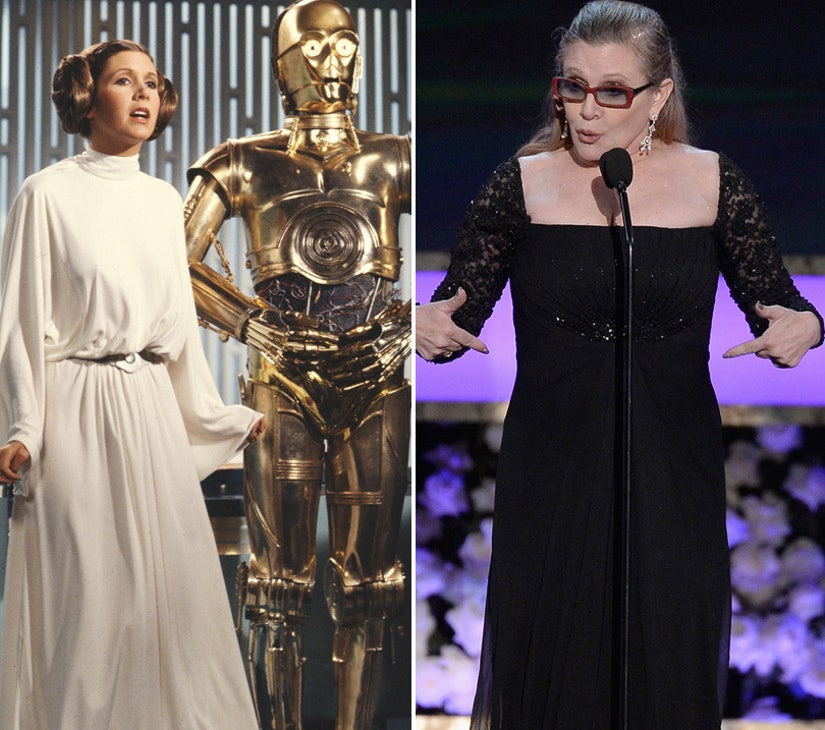 Maybe it was that gold bikini?

Carrie Fisher opened up about reprising her role as Princess Leia for "Star Wars: The Force Awakens" while chatting with Good Housekeeping U.K.

Though it was Fisher's role as Princess Leia that shot her to fame, the 59-year-old admits that she did feel some pressure to slim down for the latest installment of the flick.

"They don't want to hire all of me – only about three-quarters!" Fisher candidly told the publication. "Nothing changes. It's an appearance-driven thing. I'm in a business where the only thing that matters is weight and appearance. That is so messed up. They might as well say get younger, because that's how easy it is."

While we'll get to see Carrie reprise her role as Princess Leia in the new flick later this month, dropping the pounds was no easy feat.

"I did it the same way everybody has to—don't eat and exercise more! There is no other way to do it," she confessed. "I have a harder time eating properly than I do exercising. It's easier for me to add an activity than to deny myself something."

The actress also says that slimming down has a somewhat negative effect on her mind.

"When I do lose the weight, I don't like that it makes me feel good about myself," she explained. "It's not who I am. My problem is they talk to me like an actress, but I hear them like a writer."

In fact, Carrie has a general problem with the way society idolizes beauty.

"We treat beauty like an accomplishment and that is insane. Everyone in LA says, 'Oh you look good,' and you listen for them to say you've lost weight. It's never, 'How are you?' or 'You seem happy!"' she revealed.

Nevertheless, we're counting down the days until "Star Wars: The Force Awakens" hits theaters December 18 and can't wait to see Fisher back on the big screen as Princess Leia!