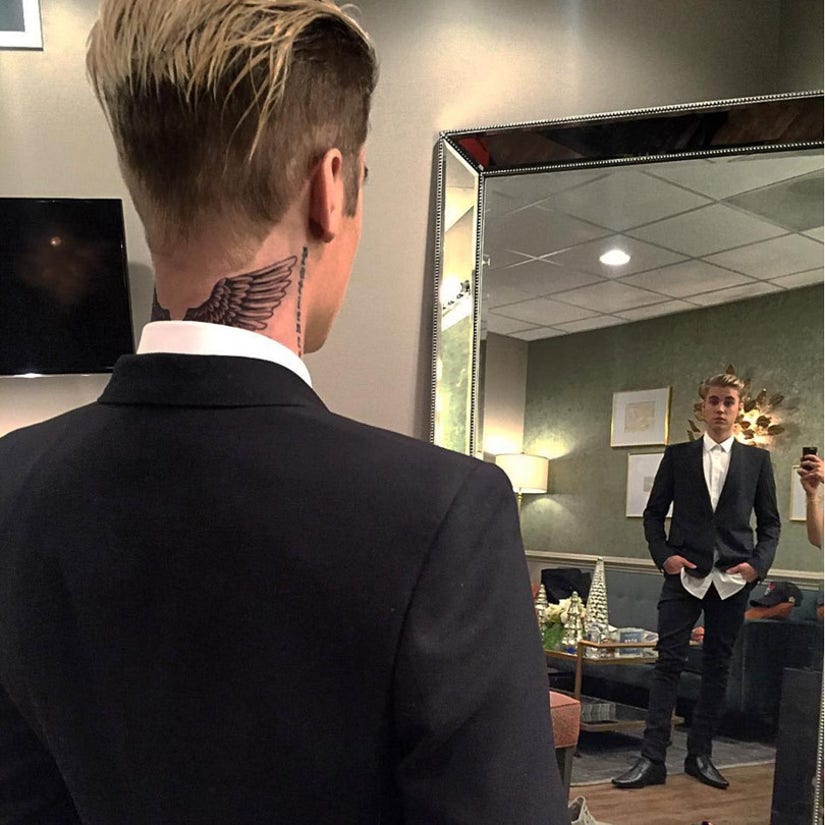 The "Sorry" crooner took to Instagram on Thursday to share a few shots of his new angel wings neck tattoo.

"New tattoo :)" he captioned one photo of his neck, as he posed in front of a mirror wearing a black suit.

This is just the latest addition to the Biebs' 50+ inkings.

The "Where Are U Now" singer also appeared on the "Late Late Show" on Thursday, where he hilariously hijacked James Corden's opening monologue.

Check out the video below to see Justin's surprise takeover:

"What's going on ladies and gentlemen," the 21-year-old opened the show. "It's great to see you guys, thank you so much for staying up with us."

While Justin had the crowd in a fit of laughter with Corden's political jokes, James finally took the stage wearing a bathrobe and towel.

"What is going on?! That's not me, that's Justin Bieber," Corden shouted, as he yelled at his house band for letting Bieber steal his lines.

"You've got to back off! Just because you ride to work with me, alright, doesn't mean that you can hang around in my dressing room all day … trying to steal my job," Corden revealed, after Justin admitted he's always wanted his own late night show.

The "What Do You Mean" singer ended up apologizing for his behavior, which prompted Corden to let him finish the show.

"I'm Justin Bieber, and this is The Late Late Show. Roll the titles!" he said with excitement.

We've gotta hand it to the Canadian native -- he sure does have a knack for comedy! What do you think about Justin's new neck tattoo and "Late Late Show" appearance? Sound off below and check out the gallery above to see more celebrity tattoos!