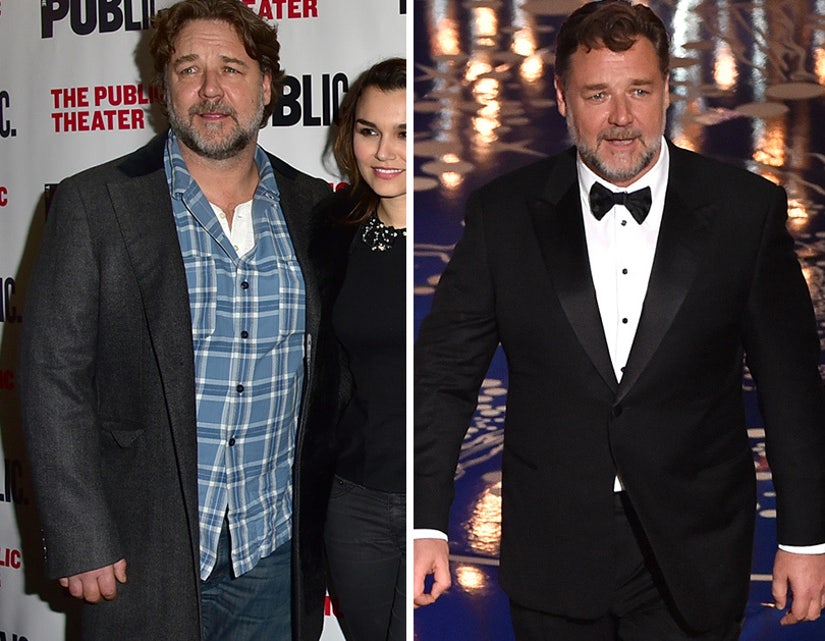 Russell Crowe just joined a long list of actors who drastically fluctuate their body weight for a role. Hey, it got Matthew McConaughey an Oscar!

Russell, who got his own Best Actor award for "A Beautiful Mind," opened up yesterday about gaining and losing a whopping 52 pounds since last year.

Now, prepare for some of the most Australian words you've ever heard.

On Thursday, a Sydney-based radio show called "Fitzy and Wippa" was gleefully mocking "Rusty" Crowe over a misunderstanding involving "footy." Rusty, who happened to be listening, called in and served up some matey ribbing of his own.

When one of the hosts inquired, "How's the rig lookin' at the moment, Russ?" - which apparently is Aussie for, "What's your weight?" - Russell replied, "Mate, for an old boy, it's coming along." The star divulged that he'd been "121.6 kilos the first week of August last year."

"I did a movie called 'The Nice Guys' where I wanted to be the physical juxtaposition of [co-star] Ryan Gosling, so that means I had to eat a couple of sheep," he joked.

Despite his gruff on-screen persona, the 51-year-old actor was nothing if not generous in his praise for Gosling, 35.

"I'll tell ya, mate, that kid is a comic genius," Russell gushed. "He's great company, he's really smart, he loves what he does, and he asks all the right questions."

On top of that, Russell says he "corpsed" - burst into laughter during a scene - more times "per week" with Ryan than he did on all of his previous movies combined!

You can catch Russell and Ryan in "The Nice Guys" on May 20th.