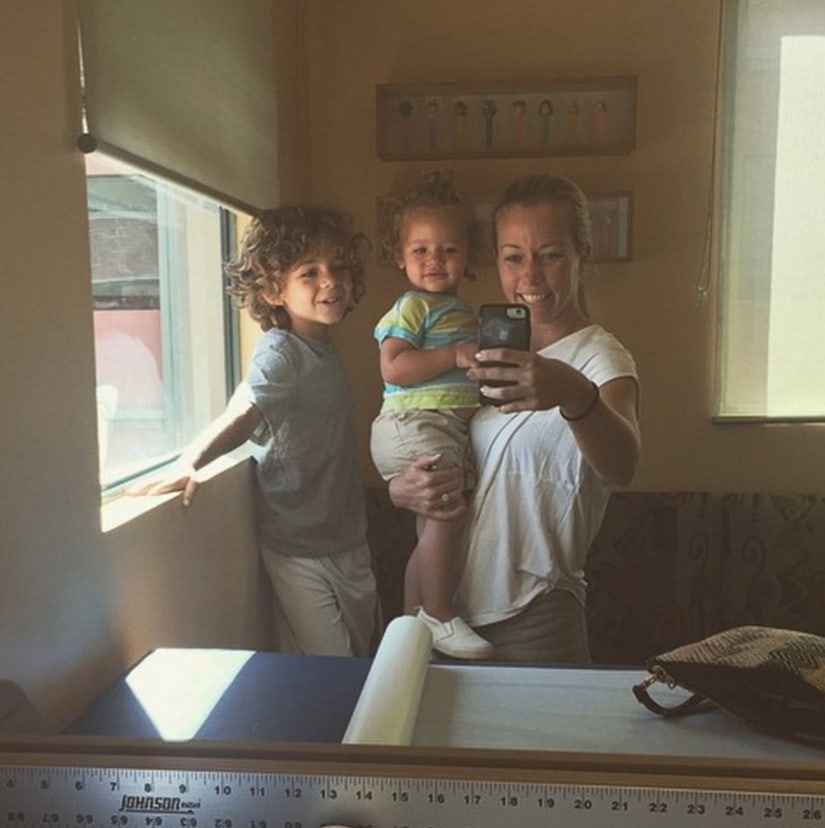 When you've gone through as much as Kendra Wilkinson has on reality TV, the question is inevitable: will you allow your children to watch when they're older?

While she's been incredibly open in the press about her marital issues with Hank Baskett -- who famously had an intimate encounter with a trans model -- and her incredibly strained relationship with her mom, how will that translate to her kids; Hank Baskett IV, 6, and Alijah, 1?

"If they're curious to see what we've filmed, if they're at that age where they just want to see it to laugh, to see what we've been through, we're totally cool with it," she tells toofab. "We really went through all that stuff and 10 years from now, we're gonna be just as strong, even stronger."

"We're gonna be that family where we'll laugh at it because it's been so long and that's what we had to go through to get our family so strong," she continues.

Wilkinson says she's honest about pretty much everything when it comes to her family. Just last week, she went through a particularly tough time after her grandmother, Mary Stotz, passed away -- something she didn't want to keep from her young kids either.

"I don't hide anything from my kids. I ask my son if he wanted to go and see my grandma on her death bed and he said 'Absolutely,'" she reveals. "I'm really open with life, I think it's smart to not hide things and be upfront. You have to prepare them for the real world. My kids are gonna be great. They know the parents that they have, that we're the most loving, dedicated parents they could have."

While Kendra previously said she'd like to have reality cameras "follow me until I die," she's still protective when it comes to her two little ones. In fact, she doesn't see them becoming reality stars like herself when they get older.

"I limit their time on TV as it is. I don't have them on TV a lot, it's funny because it plays like I'm a mom that's not there for my kids," she says with a laugh. "You get the impression that I'm not really a mom at home taking care of kids. They see it quickly, I limit my time very much on there."

"They have real lives," she adds, explaining that her show's tone doesn't fit with the family. "My show is a drama. I don't want the kids to be a part of the drama. They can come in and put a smile on our face, but I don't want them involved in any dramatic scenes. It's an adult show, the show's not about motherhood. It's not a happy-go-lucky family show."

She's definitely not lying when she says that, as this season focuses on the bitter relationship between herself and mom Patti. In a supertease for the season, Kendra hears that her mother is planning to write a tell-all book about them ... and it doesn't go over well. Though there haven't been any confirmations that a book is in the cards, it wouldn't be the first one someone's written about Wilkinson. Former "Girls Next Door" star Holly Madison also divulged some unsavory details about Kendra in her autobiography last year.

We just had to ask: why are people so interested in writing tell-alls about you?

Kendra still holds out hope that they can mend their relationship, especially after the passing of her grandma.

"I have hope that she doesn't [write a book] because I have hope that she would one day want to reconnect with her grandchildren and even me," she says. "But if she does, what can you do? When my grandma passed away, the one person I prayed for was my mom. I just hope that she finds peace. I hope she believes in a loving life. I am a loving person and I have so much love and forgiveness in my heart, I deserve another chance. I deserve a mom."

"Kendra on Top" airs Friday nights on WE tv.