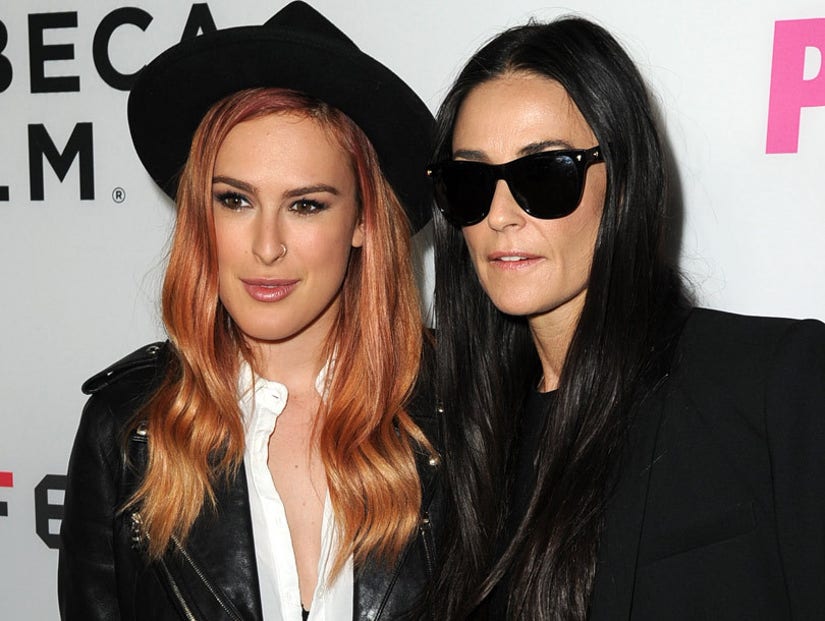 UPDATE: A rep for photographers Williams and Hirakawa just released the following statement:

The retouching that was done to the photograph was only done to resolve some distortion with using a wide angle lens for a group shot, and not to alter or modify anyone's face. We used a wide angle lens, and it might've made Rumer's chin look smaller from the higher angle that we shot the image. We did correct for the optics of the lens slightly as people's heads get distorted through the wide angle lens. We certainly did not intend to change the way she naturally looks. Our intention was to capture the special bond between Rumer and her sisters.

It saddens us that Rumer feels the way she does about the image and hope she understands that there was never any intention with it to alter her appearance.

We should make clear that this image was an outtake and was not published in Vanity Fair or vf.com nor did they ever see it.

Rumer Willis is speaking out about a new "form of bullying": Photoshop.

In a new Instagram post, Demi Moore and Bruce Willis' oldest daughter alleges photographers Mark Williams and Sara Hirakawa digitally altered a photo they took of her and sisters Tallulah and Scout for a recent Vanity Fair shoot, giving her a smaller jaw without her knowledge. Worth noting: the photo Rumer has an issue with is not one that appeared in the magazine.

"Any friends of fans of mine who posted this I would appreciate if you took it down," she captioned the snap on her social media page. "The photographer Photoshopped my face to make my jaw smaller and I find it really offensive for anyone to try and change the way you look so drastically."

"I love the way I look and I won't support anyone who would feel a need to change the way I look to make me beautiful," she continued. "Whether or not they realize it, it is a form of bullying, which I won't stand for."

Rumer opened up about her tough time with bullying growing up when she was on "Dancing with the Stars" last year.

"My Mom who is one of the most stunning women I've ever met and who everyone was comparing me to, saying that you look more like your very masculine father than your beautiful Mom," she said in a brutally honest confessional. "For years I thought 'Maybe I can get plastic surgery. If I change my face or get really skinny, that will be it, that will be the answer' and it's not."

"When you grow up with parents that are known worldwide and having so much attention from media and all of the tabloids magazines, it's really tough," she added. "When I was a teenager I was super awkward. I don't think I really felt comfortable in my body or with how I looked, and people were nasty."

We reached out to both photographers for comment, but haven't heard back. FYI: the pic in question was posted on the Williams & Hirakawa Instagram page earlier today, but has since been removed.