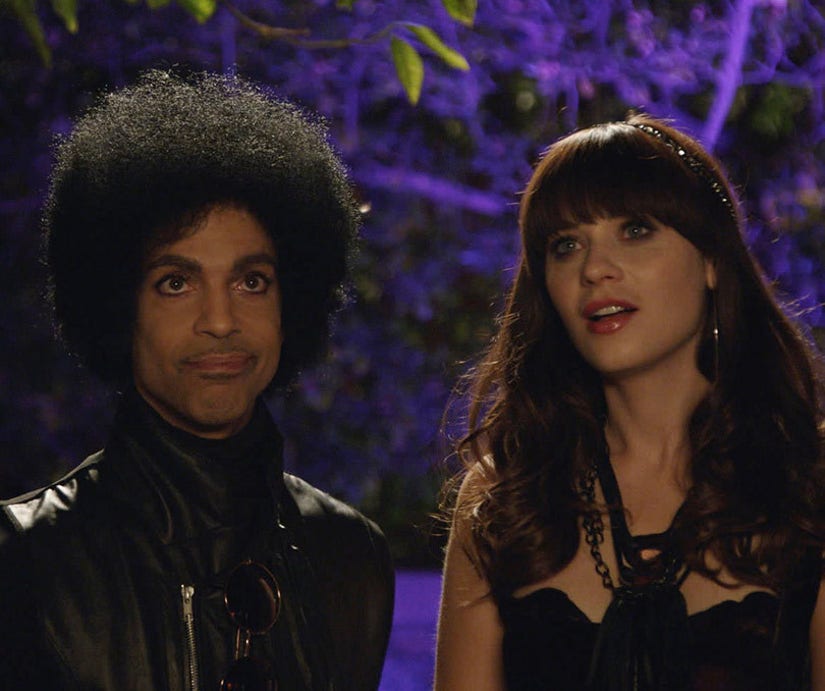 The Purple One is really good at making Kardashians disappear.

Prince had already made Kim Kardashian vanish from his stage after she failed to impress him with her dance moves in 2011, but that just wasn't enough. As Zooey Deschanel tells it, he also had them cut out of an episode of "New Girl" he appeared on in 2014.

The actress appeared on "Conan" last night, where she revealed how the legendary singer's crazy cameo came to be ... and why already-filmed scenes with both Kris Jenner and Khloe Kardashian were nixed at the last minute.

"He spent a lifetime cultivating mystique and one September day I got an e-mail from his manager saying he liked watching the show and wanted to come on," Deschanel explained. "I wouldn't have pegged him for a 'New Girl' fan. It did feel random. A huge compliment, I was floored and I'm a huge Prince fan, but I was definitely more than surprised. I didn't picture him watching a sitcom, let alone my sitcom."

The episode followed Zooey's Jess as she infiltrated one of Prince's celeb-packed parties, with stars like Alessandra Ambrosio and Dodgers pitcher Clayton Kershaw also in attendance.

"So I'm not exactly sure how the celebrities for the parties were chosen but someone was friends with some of the Kardashians and had made a phone call and they had kindly come on to shoot a cameo at Prince's party," Deschanel added. "I get there the day that Prince is supposed to arrive and I'm studying my lines and one of the PAs comes in and says I need all the sides, the scripts. She takes mine from me, takes everyone else, takes everyone's call sheets and takes them all."

"I go outside and she has a bonfire. She's burning all the scripts and call sheets," she revealed. "It turns out someone at Prince's camp said 'Who are the celebrities, I hope it's not a Kardashian.' Which is sad, I think Khloe Kardashian, Kris Jenner had come in, shot the scene and [were rushed out]. They didn't want anyone to pass each other. I felt so bad, but Prince was running the show."

When the episode aired, no trace of a Kardashian could be seen.