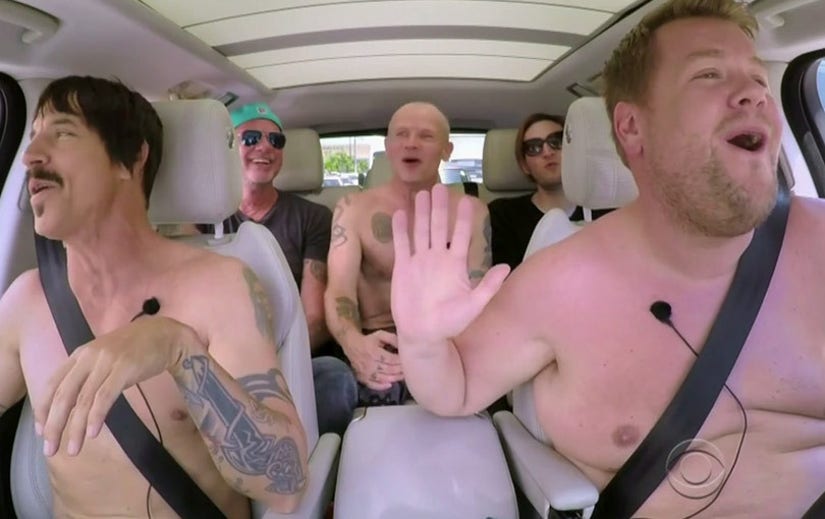 This is definitely the raciest "Carpool Karaoke" yet!

The Red Hot Chili Peppers are the latest stars to take a spin in James Corden's ride -- and they stepped it up a notch by stripping off their clothes.

Before the guys took it all off, they sang their own greatest hits, including classics like "Californication," "City of Angels" and "Give It Away."

That's when the band got really comfortable -- lead singer Anthony Kiedis, bass player Flea and Corden all took off their shirts for the rest of the cruise.

"As soon as I took the top off, it made me feel great," the host admitted after doing a solo in "The Zephyr Song."

At one point, the comedian pulled the car over for an impromptu wrestling match with Kiedis. (Yes, it's as weird as it sounds!)

"It's difficult to wrestle when you're laughing that much," Corden said after he was quickly defeated.

Things took an even more interesting turn when Anthony revealed his connection to Cher, who was his babysitter for a brief time.

"When you're 12, you don't know how old adults are, but she was fit and fine," he admitted. "I knew that and I just kind of hit that hormonal plateau."

The singer described sleeping in the singer's bed as a kid and spying on her through the crack of the door while she was in the bathroom.

The clip ended on a sweet note, with Corden saying, "I always knew that this would be a fun part of my life – to be in a car with you. But I never expected it to be as much fun as it has been. People say don't meet your heroes, but I don't think they ever met the Red Hot Chili Peppers. Thank you so much for this."

See them all in action in the video above!