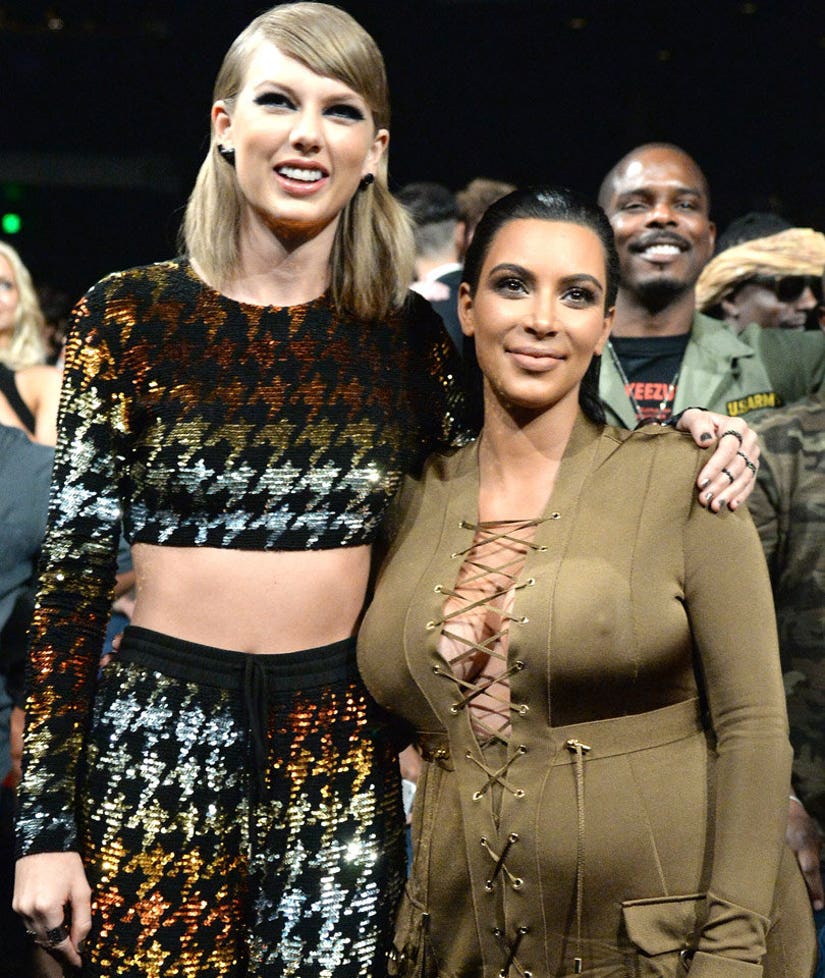 Kim Kardashian broke the internet again last night when she tried exposing Taylor Swift as a liar with a series of Snapchat videos.

The reality TV star wanted to prove Swift knew about Kanye West's song, "Famous," showing video of him revealing the lyrics to her while they spoke on the phone. She's heard telling him she considers it a "compliment" to be included on the track. While they're pretty telling clips, they still don't show Kanye telling her he's planning to use the line, "I made that bitch famous," in the song - which was Swift's major issue with it.

After Kim posted the clips, Taylor took to Instagram to share her side of the story. "Where is the video of Kanye telling me he was going to call me 'that bitch' in his song? It doesn't exist because it never happened," she wrote. "Of course I wanted to like the song. I wanted to believe Kanye when he told me that I would love the song. Being falsely painted as a liar when I was never given the full story or played any part of the song is character assassination. I would very much like to be excluded from this narrative, one that I have never asked to be a part of, since 2009."

There's a clear divide online now ... and other celebs are clearly taking sides. Click here to see Chris Brown's lengthy reaction -- as he tells Swift to "make music and shut the f--- up."

Selena Gomez, who is one of Taylor's BFFs, was clearly angry the feud was getting so much attention in the first place.

"There are more important things to talk about... Why can't people use their voice for something that f--king matters," she posted on Twitter. "Truth is last thing we need right now is hate, in any form. This industry is so disappointing yet the most influential smh."

Chloe Moretz, who's had major beef with Kim in the past, had a similar message.

"Everyone in this industry needs to get their heads out of a hole and look around to realize what's ACTUALLY happening in the REAL world," she wrote on Twitter. "Stop wasting your voice on something so petulant and unimportant."

This didn't sit well with Khloe Kardashian, who blasted her. "Is this the a hole you're referring to @ChloeGMoretz ???," she asked, before posting a picture that appeared to be Chloe's nude backside. Moretz responded, saying, "fact check: first photo is me filming my movie Neighbors 2, the second photo is some girl who was wrongfully photographed."

Ruby Rose, who spent the 4th of July with Taylor, couldn't resist calling out Khloe after the above attack. "Yo Khloe I thought you were rad when I met you but this is awful and this is a 19 year old girl," she wrote.

Bestie Martha Hunt also came to Taylor's defense, adding, "It's pathetic how quick our culture is to sensationalize a fabricated story. Take interest in the real problems going on. Spread love."

Other celebs were more subtle with their reactions ... liking (and, in most cases, quickly deleting) some Team Kim messages on Twitter.

Pharrell Williams was reportedly caught liking a tweet asking, 'How do you feel about Taylor Swift?' along with a video showing Tiffany Pollard on "Celebrity Big Brother" saying, "She's a disgrace to humanity! And she's a disgrace to women who are actually beautiful and classy. She just doesn't have the vernacular that she thinks she possesses." The video no longer appears on his timeline.

Zendaya apparently liked someone else's post reading, "I'm glad Zendaya was never really down with that whole Taylor squad s—t." Again, it doesn't appear on her timeline this morning.

And Demi Lovato liked someone's tweet reading, "I LOVE KIM KARDASHIAN." That one still appears on her Liked pages tab.

Kendall Jenner showed support for her sister by liking messages like, "The kardashians/jenners literally all stand up for eachother and it's beautiful" and Khloe writing, "Kim is a savage! Don't f--k with her man hunni." She also liked friend Hailey Baldwin's support, as the model posted some applause emojis when the drama was going down.

Katy Perry even seemingly reacted to the drama, while promoting herself at the same time, by tweeting out a link to her new song, "Rise," with the message "#RISE above it all."

Whose side are you on here -- Team Taylor or Team Kim? Sound off below!