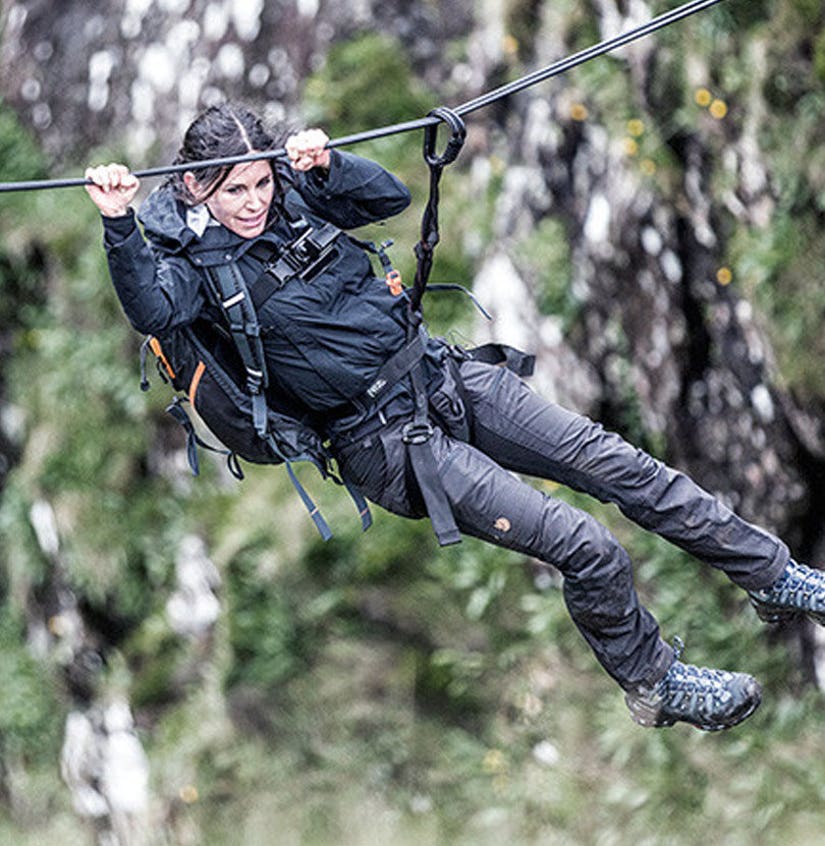 The 52-year-old, who traversed the Irish Highlands with the show's host, held nothing back when discussing such sensitive topics as her public breakups and aging in Hollywood.

Of course, Grylls, who guided her on her journey, also led the former "Friends" star into personal territory, prompting her with intimate questions during their one-on-one time together. He asked, for instance, what it was like to have been in the public eye for so long.

"I feel lucky. I don't feel burdened by it," Cox said, before admitting that there are certain downsides to fame. "I mean, people can be pretty mean, though, now that there's all this social media. The comments...if I ever want to feel really bad about myself, I just click on one of those Daily Mail comment sections."

But Cox made sure to clarify that she thinks aging in front of the camera is harder for women.

"I think there's a pressure to maintain [your looks], not just because of fame, but just, you know, being a woman in this business," she said. "Getting older has not been...I don't think it's the easiest thing. But I have learned lessons. You know, I think I was trying to keep up with getting older, trying to chase that...you know, it's something you can't keep up with. So, the more you relax into it and the less I try...'cause sometimes you find yourself trying and then you look at a picture of yourself and go, 'Oh, God.' Like, you look horrible. I have done things that I regret, and luckily they're things that dissolve and go away. So, um, that's good, because it's not always been my best look. So, now I just have a new motto: 'Just let it be.'"

Cox is also pretty zen when it comes to her attitude towards her past breakups. When asked about her divorce from David Arquette, she revealed there's no bad blood between the former couple, who are parents to 12-year-old Coco.

"I think that we were such good friends," she said. "We found ourselves leading separate lives and just coexisting and being great friends, but not having the intimacy that...is so important in a relationship."

And it appears that friendship has endured despite their split.

"I mean, as divorces go, I would say it's one of the better ones," she revealed. "For sure. We're good co-parents together."

Not so easy, admits Cox, was her breakup from Snow Patrol's Johnny McDaid, with whom she has since rekindled her romance.

"We were engaged for over a year and then we broke up," she explained. "There's something about...you know, he's from Ireland. And the way he regards love is precious. We have to treat it in a different way. It's more special," she said. "You coddle it. So, I didn't know how to regard love the way he does. And it definitely made a lot of mistakes that I see, whether it's co-dependency or people-pleasing. I didn't know how to bring it in. It was always external. I definitely have learned a lot, and no matter what, I will be a better person from that breakup, even though it was so brutal."