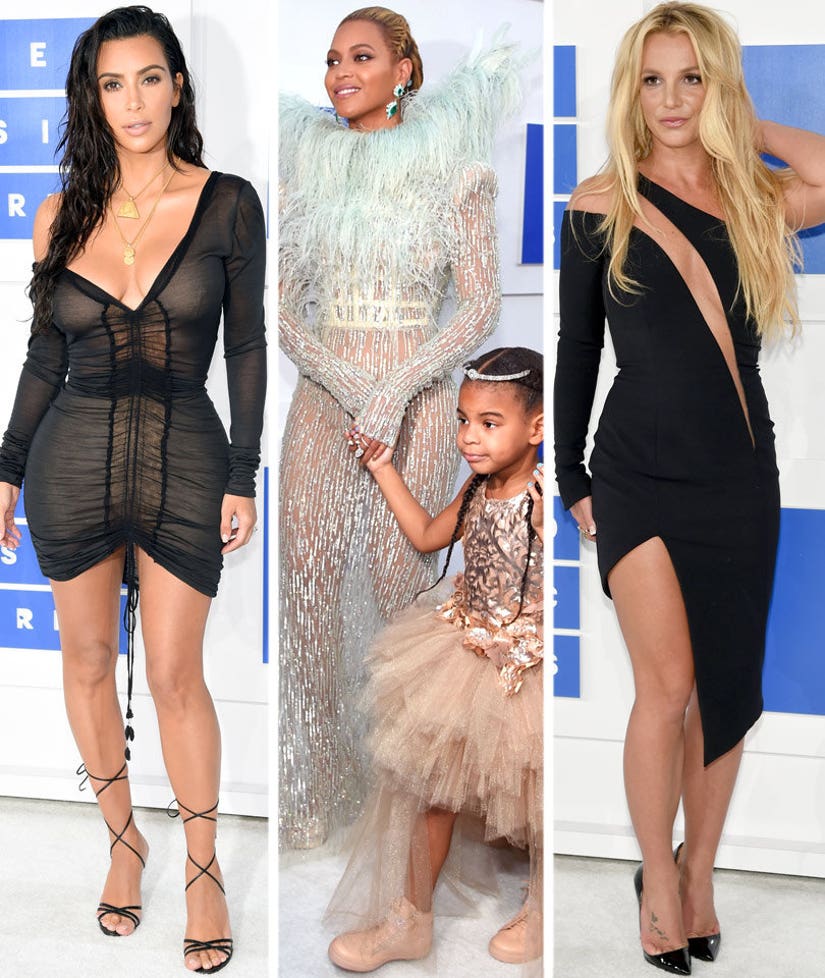 The VMAs are always known for having some water cooler moments everyone will be talking about the morning after, from Britney Spears' 2007 trainwreck of a performance to Miley Cyrus and Nicki Minaj's onstage feud in 2015.

Well, this year's show was no exception.

From the universally panned "hosts" to Kanye West's rambling, Taylor Swift/Amber Rose-mentioning speech, it was definitely another memorable evening at Madison Square Garden in NYC.

It all kicked off with one amazing red carpet, with appearances from Beyonce and Blue Ivy, Kim Kardashian, Britney Spears and more -- check out their pics above and see the biggest moments below!

1.) Key & Peele Feel the Ire of the Internet

MTV hired comedians Key & Peele to do commentary for the VMAs this year ... and the plan backfired. While the two are actually pretty hilarious, their performance as "social influences" @lizardsheeple and @theshamester was panned on social media.

Here's a sampling of the reaction below:

Key and Peele are annoying as hell. Just hire Kevin Hart to Host everything.

key and peele: MEME!
everyone: pic.twitter.com/eWnbiLXfzq

I love Key and Peele so much. But this is so brutal. I'm embarrassed for them. #VMAs

Key and Peele so terrible my god

You can basically just search their names on Twitter for more ... it's just brutal.

The two performed their new single "Side to Side" with a workout routine that oozed sex appeal.

While it's nothing new for Nicki, it's definitely a more mature look for Ariana. After starting the number on an exercise bike and hitting a pommel horse, the number ended with two male dancers all up in the singers' crotches.

The dancers then simulated oral sex on the duo, something we definitely weren't expecting!

The rapper went on a seemingly endless rant about his career and his now infamous song and video for "Famous."

"'Famous' might lose to Beyonce, but I can't be mad, I'm always wishing for Beyonce to win," he said at the top of his speech, recalling his interruption of Taylor Swift back in 2009.

He went out to give Amber Rose an shoutout, adding that his wife, Kim Kardashian, is a "G" for being cool with him bringing up his ex. As for Swift, all he said about her was that he loves "all y'all" in his video ... and added, "That's why I called her."

He went on to list off his idols, including Walt Disney, Steve Jobs and Howard Hughes, before introducing his insanely hot new music video.

Harris picked up a Best Male Video moonman for his single "This Is What You Came For." And while he thanked Rihanna in his pre-recorded acceptance speech, he forgot to bring up another very important woman: his ex.

While she doesn't appear in the video itself, Taylor wrote the song and even performed background lyrics for the single.

Think he should have mentioned her ... despite all the ill-will between them right now?

Queen Bey did a a medley of songs from "Lemonade" for an unheard of 15 minutes, performing ahead of what was supposed to be Britney Spears' big VMA comeback.

With Knowles absolutely crushing her vocals, dance moves and overall performance, she proved she's a force to be reckoned with ... and one you don't want to hit the stage after!

While it's IMPOSSIBLE to follow up Beyonce, Britney came out and did what she does best: looked amazing, danced her butt off and lip-synched her way through a performance of "Make Me."

She pretended to sing live at one point, as she spit out some lyrics from "Me Myself and I," but those vocals were almost definitely pre-recorded as well.

That being said, anything was going to be better than her 2007 "Gimme More" performance ... and this delivered on what Brit's fans expect from her in 2016.

Jimmy Fallon picked an easy target for his appearance at the VMAs, hitting the stage dressed as Ryan Lochte, grey hair and all.

"Is it too late now to say sorry," he started singing when he got to the podium, referencing Justin Bieber's song. "It's my jam, I wrote it, I produced it, I directed the video."

While some of the jokes fell flat, at least one person was laughing: fellow Olympian Michael Phelps. Check out his reaction above!

Though he got caught in traffic for the beginning of the show, Drake showed up fashionably late to present Rihanna with the Michael Jackson Video Vanguard Award.

His speech was touching and at times seemed like it was moments away from a proposal.

"We love the woman who hasn't changed since day one. She's someone I've been in love with since I was 22 years old," he told the crowd, who all went wild. "She's one of my best friends in the world, all my adult life I've looked up to her. She's a living breathing legend in this industry."

They didn't quite give us the kiss we all wanted, but their hug was #relationshipgoals.

"This is the first Vanguard to land anywhere close to my country," Rihanna said in her speech. "My success, it started as my journey, but now it's not my own, it's my family's, it's my fans, it's my country's, it's women, it's black women. There's just so much growth that has happened and I can't believe I'm receiving a Michael Jackson Video Vanguard Award at 28 years old. It's crazy!