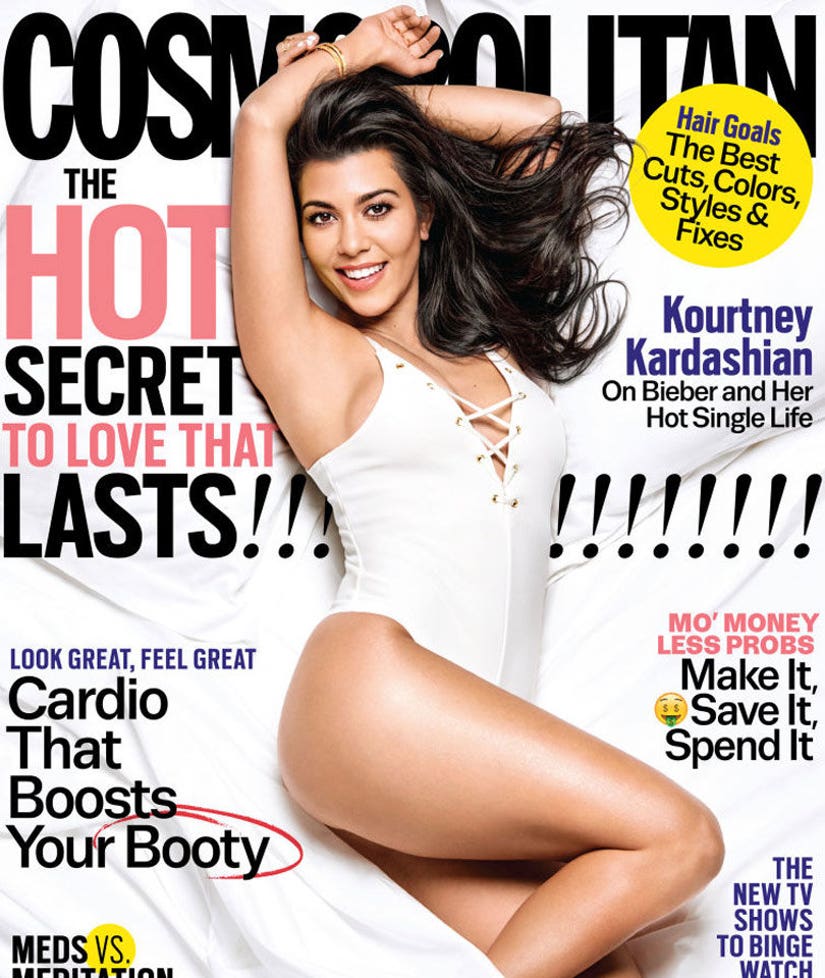 Kourtney Kardashian leaving everything in the hands of the man upstairs.

The "Keeping Up with the Kardashians" star covers the new issue of Cosmopolitan magazine, where she dishes on her on-again-off-again relationship with baby daddy Scott Disick, reveals if she lets her children watch her hit E! show and shares her opinions on Kim Kardashian and Kanye West's feud with Taylor Swift.

Kourt and Scott split last December after Disick was spotted getting a little too close for comfort with his ex-girlfriend Chloe Bartoli. Even though the two have been broken up for quite some time now, it sounds like the 37-year-old isn't totally shutting the door on her relationship with Scott.

"...the idea of having my family together is amazing, but it's not the way things ended up. They may end up there. I'm not sure. To me, it's in God's hands," she tells the mag. "If it's meant to be, then things will line up … We definitely tried for a long time. But relationships are exhausting!"

"Being able to focus on the kids and me right now is good," she explains. "We say to each other all the time, 'I'm the coolest ex-girlfriend/baby mama you could ever ask for!'"

Kourt also says both she and Scott are nowhere close to dating other people yet. "That's what I don't know," she says of when that day comes. "We're so not there yet."

Nevertheless, the mother-of-three says she is open to expanding her adorable family. "I would have more," she confesses. "I could see myself with six kids. I just don't know what's in God's plan."

At least Kardashian has a strong support system -- Mason, Penelope and Reign Disick seem to be extremely close with their famous aunts, uncles and cousins ... but that doesn't mean she lets them watch "KUWTK."

"They've seen some of it, but no," Kourt says if her kiddies are allowed to watch the show. "I was in the shower, he [Mason] woke up, and it happened to be on. He was like, 'Who is Blac Chyna? And Kiki [Kim] showed Larsa [Pippen] her vagina!' I was like, this is why they don't watch the show. Some of the content is just not appropriate."

The eldest Kardashian sister also weighs in on Kim and Kanye's headline-making beef with Swift ... after they released a video recording of Taylor approving West's lyrics for his new single "Famous."

"It's her husband, and he's family," she says. "The truth is the truth, so why not let it be known?"

What do you think about Kourtney's candid comments? Sound off below and check out the gallery above to see more hot photos of the Kardashian clan!