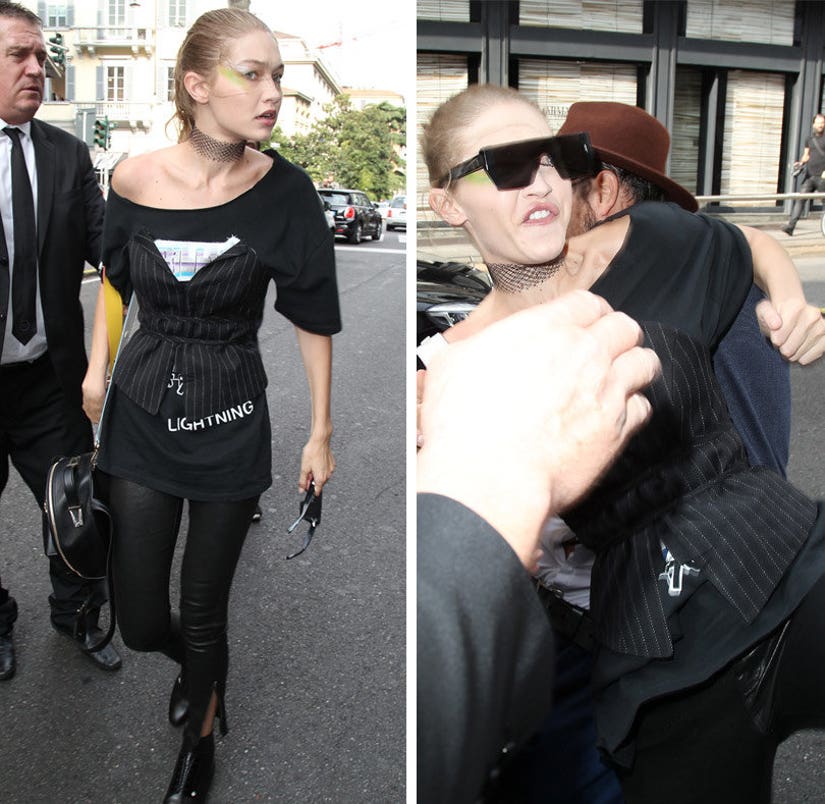 Gigi Hadid proved her she can defend herself -- thank you very much -- last week when she fought back against a stranger who grabbed her on the streets of Milan.

The supermodel was caught on camera leaving the Max Mara show last Thursday, when a male waiting outside attempted to literally pick up Hadid without warning. The 21-year-old stunner fought the guy off though, smacking him in the face with her elbow before breaking loose.

"I remember taking the time, as it all felt slo-mo, to look at him, a stranger, and my first reaction was: 'Get me out of this situation,'" she now tells Lena Dunham in this week's Lenny Letter. "I played volleyball, and my coaches talked about muscle memory. I started boxing two years ago and I always remembered that. Since then, I hadn't been in a situation that forced me to fight back, but it just came out when he grabbed me — it wasn't a choice. I do have that fighter in me."

While her totally badass reaction is worthy of applause, Hadid makes it clear she truly thought she was in real peril.

"Honestly, I felt I was in danger, and I had every right to react the way I did. If anything, I want girls to see the video and know that they have the right to fight back, too, if put in a similar situation," she tells Dunham. "Practicing self-defense is important so that when you're in the moment, reacting from muscle memory comes more naturally to you than freezing up. Confidence in your own ability to defend yourself comes with educating yourself about it, and is a massive advantage when in an unsafe situation."

Though most of the reaction to the incident has been overwhelming positive on Hadid's behalf, not everyone heaped on the praise -- and that's what really ticked off the model.

"The first article that was posted about the incident was headlined: 'Not model behavior. Gigi aggressively lashes out and elbows fan in the face after he tries to pick her up. The supermodel angrily hit an unknown man before running to her car.' That's when I really got pissed," she says. "First of all, it was a woman who wrote the story with that headline. What would you tell your daughter to do? If my behavior isn't model behavior, then what is? What would you have told your daughter to do in that situation?"

"My mom has taught me the power of my instincts since I was a kid. She'd always be like, 'OK. Pay attention to the people who make you feel uncomfortable. I want you to tap into that and be aware of it,'" Hadid explains. "I continue to use that intuition with the fashion industry and the people who I have to be around. It usually guides me pretty well. I think it guided me in this situation, too."

Gigi admits she's no superhero for what she did ... but is thrilled with the support she's received in the days following the attack.

"It sounds cliché to say it, but in the moment, it wasn't heroic to me," she adds in closing. "It was just what I had to do. It's very touching to me that people see it that way. I know people are put in much worse situations every day and don't have the cameras around that provoke social-media support. I just want to use what happened to me to show that it's everyone's right, and it can be empowering, to be able to defend yourself."