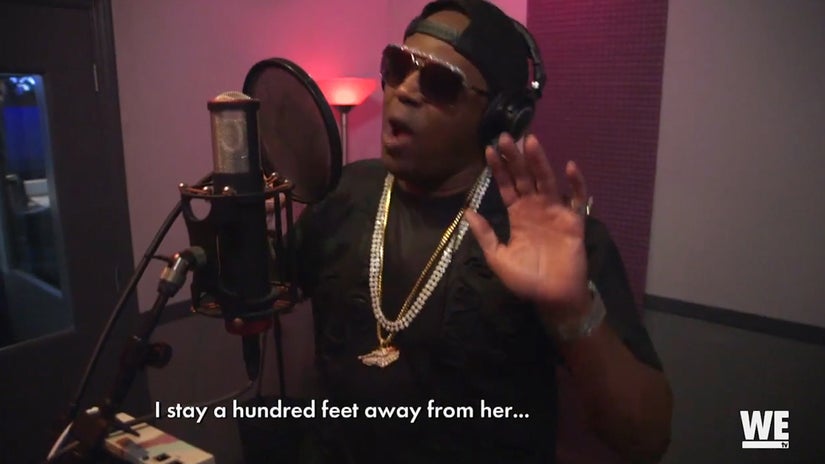 In an exclusive sneak peek clip, Master P is seen recording a song about his strained relationship with his estranged wife, Sonya Miller. The lyrics are very telling.

"My baby mama tryin' to sue a hitter... I hit the club, bad women tryin' to recruit a hitter .. I gave you everything and this how you do a hitter? They say a broken hearted woman might shoot a hitter," he raps. "I stay a hundred feet away from her, I hope that new dude you got got cake for you. Even though you tried to play my boy, I pray for ya, only for the kids man, I still might make a way for ya. LOVE!"

Master P, real name Percy Williams, and his ex have been battling it out over their children -- including son Romeo Miller -- and spousal support since she filed for divorce in 2013.

"My father's song is about going through a very public divorce with my mom," Romeo says in the clip, after he shows up to the recording studio. "Everyone's going through something and everybody wants to repair that thing that has been broken. First my mom, now Angela, it's crazy."

Romeo's referring to Angela Simmons, his longtime friend who blindsides him with a surprise engagement to another man in tonight's season premiere.

While Master P's lyrics may not paint Sonya in the best light, it says the song "comes from love."

"I don't care man, I'm gonna be there for you, no matter what. All that stuff you see in the paper, that don't mean nothing, we going 100," he explains. "It's about anybody that's going through something that could feel like something's broken, how you put those pieces back together."