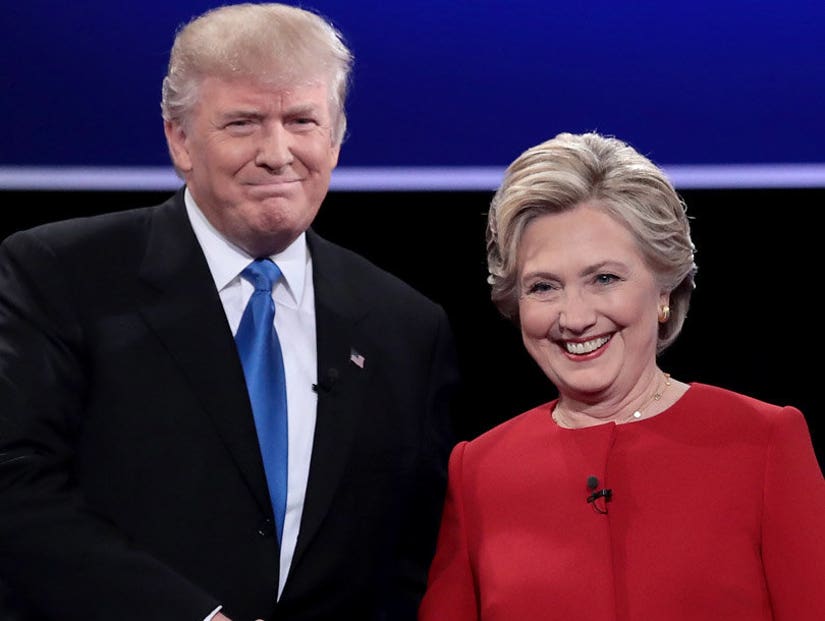 Donald Trump is our new President. Let that sink in for a minute.

After one of the most divisive elections we've ever seen, The Donald has been named as President Barack Obama's successor ... and the Internet sure has a lot of feelings about it.

This election has been one marked by a never-ending e-mail controversy, totally insane quotes from both candidates like "Grab her by the p---y" and "Basket of deplorables" and much-needed levity thanks to spot-on impressions from Alec Baldwin and Kate McKinnon on "Saturday Night Live."

Whether or not you're happy with the results, it's probably safe to say we can all agree on one thing: thank goodness it's over.

Trump's celebrity detractors went into overdrive all night long ... while his famous supporters were a little harder to find [Click Here to See the Full Breakdown of Their Reactions]. From celebrations to disappointment, check out the most noteworthy tweets below ... and sound off with your own in the comments.

Just was watching the news... maybe they'll ask me to sing 'You Can't Always Get What You Want' at the inauguration, ha!

well this is utterly terrifying

I am in tears

CONGRATULATIONS PRESIDENT TRUMP! @realDonaldTrump against all odds ..against the establishment and even against most from the GOP..U did it!

You just elected a vindictive racist, America. And he gets the most advanced and unaccountable intelligence apparatus in the world. Great.

Wellllllllll there the fuck u have it..... Thank God I have all my international friends IM INTERNATIONAL NOW BITCH ✌🏼️

Well... like always - gotta make the BEST of every situation. Need to stay positive. That's the only way I believe.

On a serious note, you mustn't be angry at the people who voted for Trump. They're victims too. In fact, many of them will suffer the most.

A climate-denying, anti-equality, anti-reproductive rights establishment has been installed, so yes, we're allowed our online meltdowns.

I wonder if we could move Australia closer? Then it would be a contender.

First African American President will be succeeded by a man endorsed by the KKK. Please. Don't say this has nothing to do with race.

Wow I guess the people have spoken, gotta respect that. Strap up, We're going back in time, get Dolorian ready. Wow, What a world.

Wait. So our 1st lady is Melania. Lolololololol

When do they say 'Live From New York' and throw to the credits? This sketch is scarily overlong & not funny anymore.

Look at the all the awful, hate-filled people on stage with Trump. They won. Pence now gets to spew his hatred for the gay community.

Dear #NewAmerica. You are now in an internment camp of the mind.

On that READ, I'm going to bed. Misery can't survive without company, don't let them take you without a fight. ❤️

I still believe in us. Despite this evident, great divide. It's time to come together. Hear each other. Not give up, cry, or gloat. Unite.

The positive element from all this is that we can no longer pretend that we are free of racism & sexism. The question is, what do we do now?

The WORST week to take a break from drinking.

im scared for my body :( for real scared

I'm freaking out. I need a thunder jacket or something. I don't know what's happening.

One thing that is changed forever in this country is the meaning of the word "Christian" as it applies to politics.

Make no mistake, this is a white nationalist take over.

How do we explain this to future generations of women? And minorities?#weshouldbeashamedofourselves

I just want to remind everyone that we are looking at a very close race with a presidential candidate who was endorsed by the KKK.

Entering a depression I've not known before. It is deep and wide and scary.

Is this really what America wants? I can't wrap my mind around this! I still have hope.

I'm going to find the gophers and smoke a lot of pot and go into the Xanax Smoothie food truck business.

Mexico didn't agree to build a wall,the "ban Muslim" policy wasn't real.They were crazy sound bites that made republicans like him Wake up!

I hope America can find a way to heal, unite and remember to serve the poorest & most disenfranchised among us.

well this is utterly terrifying

No but seriously: THIS many of you don't mind the body-part grabbing xenophobic man who says "there's my black over there?"

I can only describe my state of being as one of stunned, nauseous disbelief.

The only silver lining to any of this, is the possibility of a "White House Apprentice."