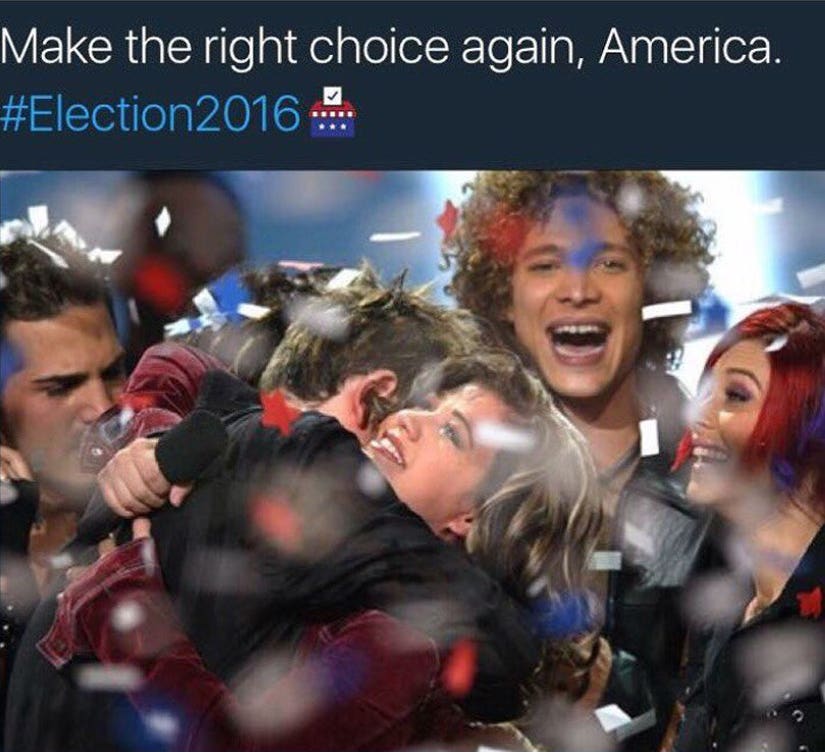 Kelly Clarkson is trying to get out the vote—with a little bit of humor.

The "American Idol" season one winner took to Twitter to poke fun at Justin Guarini—AKA the guy who lost to Clarkson on the reality competition series back in 2002—in an effort to encourage her followers to vote.

"Make the right choice again, America. #Election2016," read a meme the "Stronger" singer tweeted out, along with a screen grab of the moment she took the title (a smiling Guarini can be seen in the background).

It's pretty obvious who the 34-year-old considers the "right choice," seeing as a couple hours before she threw some light hearted shade at Guarini, she shared a throwback photo of herself posing alongside Democratic presidential candidate Hillary Clinton.

I've been a fan of this woman for years #proof #vote #imissmyshorthair shout out 2 Jen & Ash. I love ur political look Ash. Very studious 😂 pic.twitter.com/Z0Gi8dvGOp

"I've been a fan of this woman for years #proof #vote #imissmyshorthair," she captioned the image.

But don't take that to mean that the Grammy winner is attempting to encourage those who disagree with her politically to vote.

When a fan tweeted her disappointment over the singer's choice for a candidate, telling her she was “disappointed in her," Clarkson took the criticism in stride.

"We all have a voice and I respect yours," was her diplomatic reply, complete with a smiley emoji. "I'm never sad when people stand for what they believe in. I'm sad when they don't stand at all."

Sounds like a political message we can all get behind!