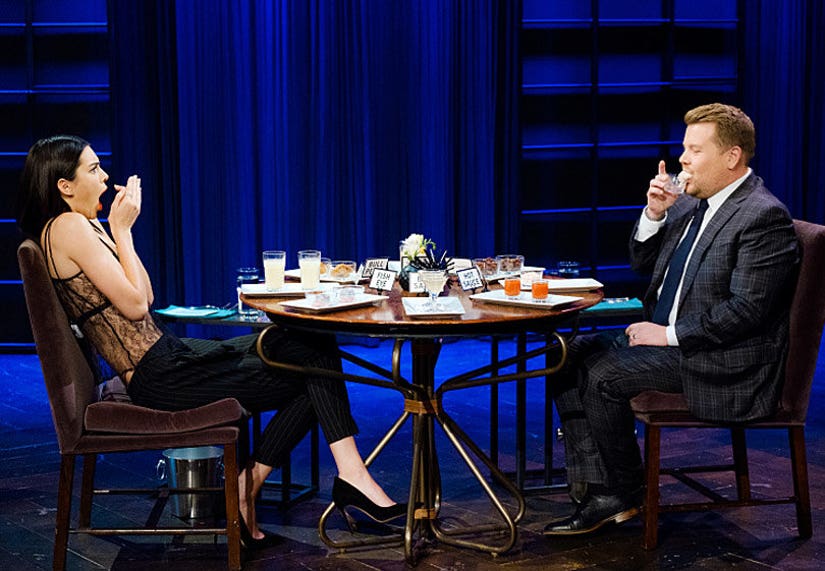 On last night's show, Corden challenged his guest by asking her some pretty contentious questions. If she refused to answer, she had to eat something nasty.

Like any good contestant, she did a little bit of both.

When asked to rank Kardashian family baby names, her top three favs were North, then Saint, and then finally Dream. Left out entirely were all of Kourtney Kardashian's children, Mason, Penelope, and Reign. Ouch!

James then up the ante, asking who her least favorite Taylor Swift squad member was out of Selena Gomez, Hailee Steinfeld, Cara Delevingne, Uzo Aduba, Karlie Kloss, Gigi Hadid or Swift herself. For this, she opted not to answer, having to drink bird saliva. Gross!

Later, the famed talk show host asked her why Kylie Jenner -- who was supposed to appear on the show alongside Kendall -- was a no-show, telling execs that she was "sick." When pressed by Corden about Kylie's absence, asking how Kylie was feeling, momager Kris Jenner -- who was standing off-stage -- first mouthed "No!" and then yelled to the stage, "Drink the clam juice!"

And that she did, as Kris was seen saying, "This is funny" while laughing.