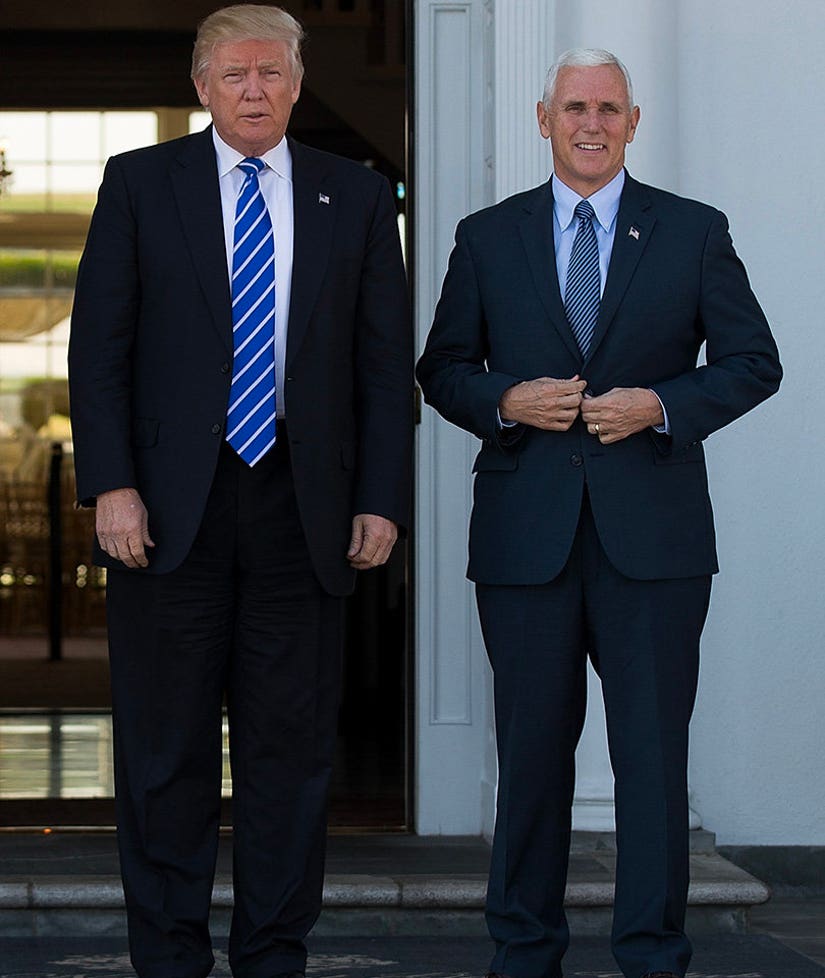 Vice President-Elect Mike Pence headed to Broadway's extremely popular "Hamilton" last night, and not only was he booed, the cast themselves very eloquently voiced their concerts about Pence and Donald Trump's policies.

Brandon Victor Dixon, the actor who portrays Aaron Burr in the hit play, poited out Pence's presence after the curtain call.

In a moving speech he said, "I see you walking out, but I hope you will hear us. There's nothing to boo here, we're all sharing a story of love. We welcome you, and we truly thank you for joining us here at Hamilton: An American Musical -- we really do. We are the diverse America who are alarmed and anxious that your new administration will not protect us, our planet, our children, our parents, or defend us and uphold our inalienable rights, sir. But we truly hope this show has inspired you to uphold our American values, and work on behalf of all of us. We truly thank you for sharing this show, this wonderful American story told by a diverse group of men and women of different colors, creeds and orientations."

Needless to say, it was a good speech, and a fine speech at that, but today, Trump caught wind of it and penned his own message on Twitter.

The President-elect wrote, "Our wonderful future V.P. Mike Pence was harassed last night at the theater by the cast of Hamilton, cameras blazing. This should not happen!"

He continued, and demanded that the cast of "Hamilton" apologize. "The Theater must always be a safe and special place. The cast of Hamilton was very rude last night to a very good man, Mike Pence. Apologize!" Even Trump's campaign manager, KellyAnne Conaway, got into the mix and said, "This is so true. And Mike Pence deserves respect and a peaceful night out with his nephew and daughter.

Check out some of your favorite celebrities' reactions ... things got intense!

Proud of @HamiltonMusical. Proud of @BrandonVDixon, for leading with love.
And proud to remind you that ALL are welcome at the theater.

Proud of my @HamiltonMusical peeps. Y'all make me So Very proud.

have you read the very respectful words the cast directed toward Mr. Pence? Is that harassment or freedom of speech? https://t.co/clZ4n79dQl

#hamiltonmusical cast spoke to the VP elect eloquently, respectfully, and from the heart. @realDonaldTrump obviously you didn't see the tape

I can't be silent on this. I watched the video. The cast was respectful and honest. Quit whining, grow a spine, and suck it up, kid. https://t.co/1tkCrQNzpn

I thought what the cast of @HamiltonMusical said to our new VP was respectful inclusive and classy. I don't see the "harassment".

...@realDonaldTrump
Theatre safe? Or free from opinions u don't like?
That's never happening.

Waaaa! The mean Hamilton cast spoke out politely and respectfully to Pence! Waaaa! Now the right is boycotting a sold out show! #HaGoodLuck

Can the president elect denounce all the terrible racism and hatred that is being seen throughout the country? Act like a president?

You know what? I support #BoycottHamilton. I hope it intensifies -- especially during the first week of March, maybe that Sunday matinee?

Even Chrissy Teigen chimed in on the fray, sarcastically writing, "Wow @realdonaldtrump is right. I can't believe they would subject poor, innocent Mike Pence to such abhorrent, evil hate speech."

"Interested to see if trump supporters will be able to criticize the inevitable dumpster fire that will ultimately be his actual presidency," she continued. "Donald is sensitive enough to actually seek out a way to punish/get back at anyone who dare criticize him. That's such a sad thought. Donald knows very well what he is doing. He knows the Hamilton speech was NBD. He knows his tweet will fire both sides up to distract from the 25 million dollar settlement of yesterday. Most conniving human on planet earth."

Weigh in on the comments below and add your praise to the chorus!