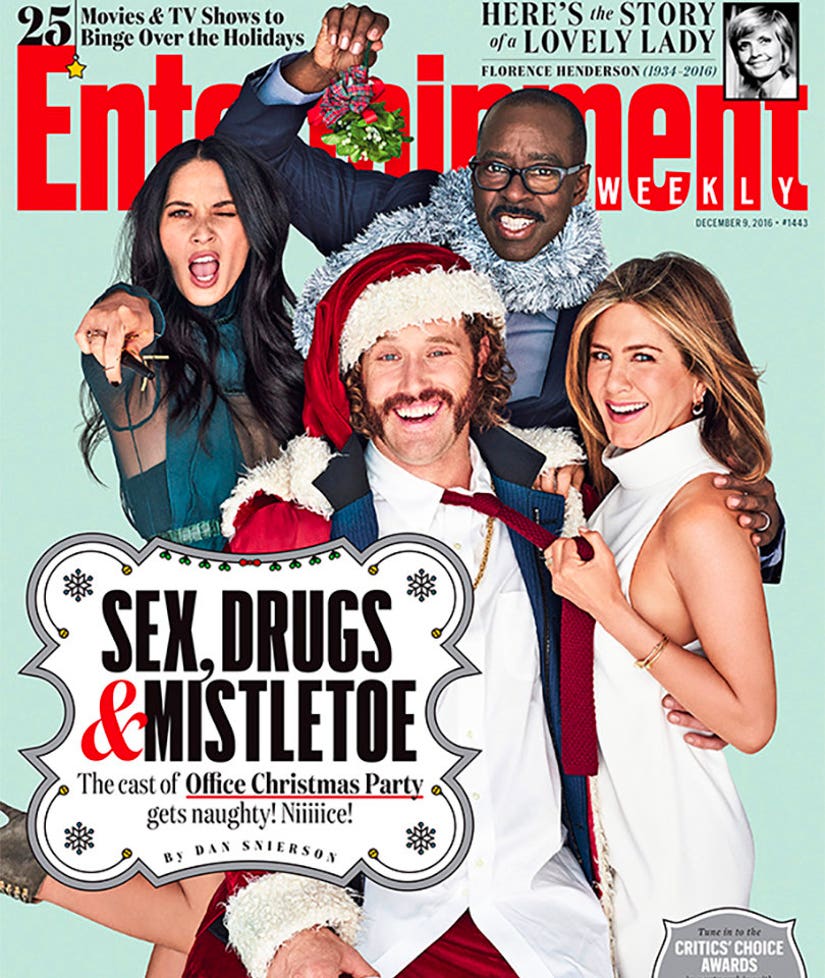 "Office Christmas Party" sounds like it's gonna be this year's "Love Actually" ... perhaps just without the heartwarming message that love transcends all, and a lot more nudity, drugs, and generally offensive humor.

Here's five of the raunchiest, juiciest "Christmas Party" revelations from Entertainment Weekly -- some of which will have you cringing, and some that'll have you laughing your side split.

1. Jennifer Aniston was swarmed by nude extras -- all the nude extras, actually.

Poor Jennifer Aniston didn't have a prayer when she walked into shooting on the first day of production. Aniston revealed that it was "intense," and that everyone around her -- all 350 extras! -- were stark naked. "That was kind of intense," she said. "It's a lot, walking into a lot of extras. And they're naked. And they're walking toward you in the scene, and they're directed to sort of, oops, lunge toward you, onto you. Yeah, it's overwhelming. I don't like crowds to begin with. I'm not great at concerts. Never have been since I was a kid."

2. Olivia Munn had a conversation with a "birth-naked" costar.

Olivia Munn recalled a horror story during filming where she was accosted by another extra who, while sitting spread eagle and completely naked, wanted to talk about her stint on "The Daily Show." Munn said, "I was there a long time with these people, to the point where I looked over to the left and there was this guy who literally was just birth-naked, everything out, legs spread open. By this point I was desensitized and he goes, 'Hey, Olivia,' and I looked down and there he is, just waiting for an invitation from somebody. I go, 'Yeah?' and he was like, 'What was it like working on 'The Daily Show'? Because I just really love Jon Stewart. What's he really like?' And I'm like, 'Um...' "

3. There's apparently gonna be "penises on a Xerox machine."

Aniston spilled the beans on some more intricate details of the film, and claimed that while it won't be as raunchy as its comedy contemporaries such as "The Hangover" or "Deadpool," there will be a certain level of taking it up another notch from your average family-friendly holiday movie. Jen admitted, "The pressure is not to out fart-joke each other, or out-d--k-joke each other ... because to me that's sort of gratuitous and sophomoric. It's, 'How do you match up with the quality of those others?' I know that there's an elegance that you can still reach and a high quality with an R. I mean, you have to have your level of penises on a Xerox machine, I imagine, but ..."

4. This isn't your average Christmas flick.

Director Will Speck revealed that the film is holiday-themed, but that it's got an anarchistic quality to it. "Krampus," anyone? Speck said, "We have an allergy to Christmas movies, but no matter how coal-filled your heart is, you can't help but want to connect with people and buy into that fantastical time of year. The goal was to make a movie that checked elements of that box but also disrupted, and was an anarchistic version of a Christmas movie." We thought we did that ... with the aforementioned "Krampus," and "National Lampoon's Christmas Vacation." How much more anarchistic can you get?

5. Drugs are apparently abundant at this particular "Christmas Party."

In a scene straight out of "Animal House," one of the film's main characters -- and a reserved character at that -- accidentally has cocaine blasted into his face. The hilarity that ensues is probably imaginable, but what's more is that castmember T.J. Miller revealed that there's an outright drug party. He said, "The movie is not about the crazy cocaine party, the movie is about the idea of throwing the rules out of the window for one night. It's more: 'The next day, all will be forgiven,' so everybody goes for it that evening. And that was the feeling, actually, on the set. It was long hours, it was tough, but everybody kind of went, 'We're just going full tilt on this one.' "

All we know is that we cannot wait to see this movie -- weigh in on the comments below and tell toofab: will you be adding "Office Christmas Party" to your holiday movie repertoire this season?