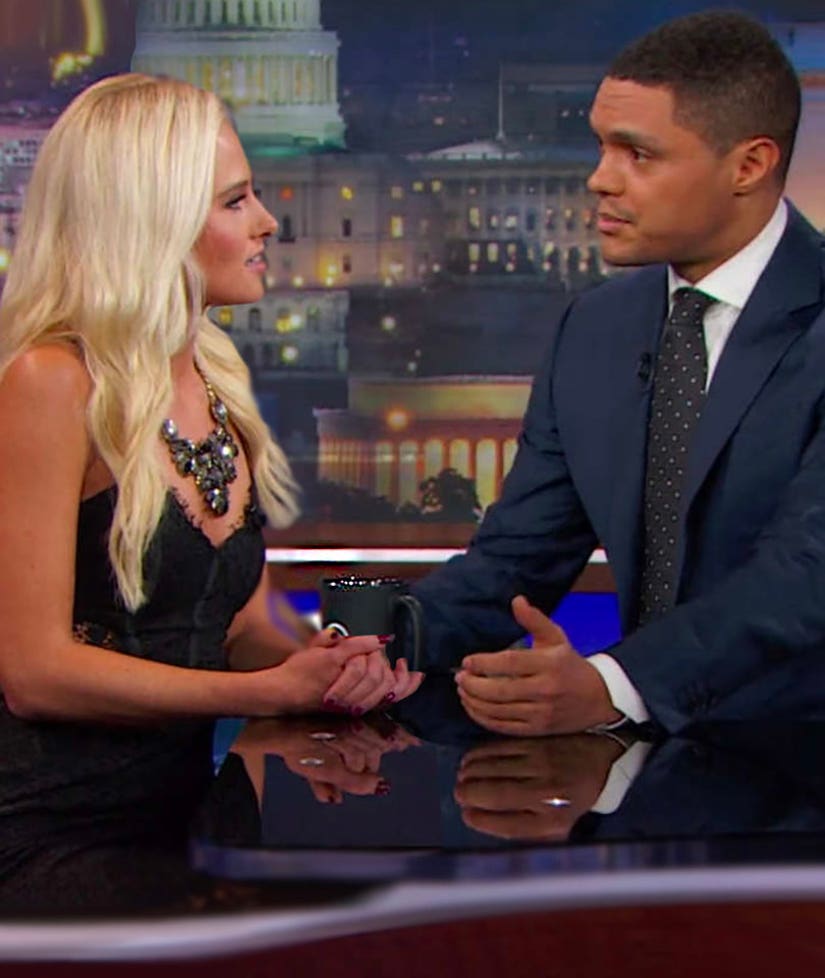 Lahren and Noah clashed Wednesday night over differing views on the Black Lives Matter movement, KKK and Colin Kaepernick's protest. If Lahren didn't think things were going to get contentious, she might've been better advised to just stay at home in her Donald Trump PJs.

To recap, Noah said, "America has a problem within its police force, and although it is a problem that disproportionately affects black people, it's not just a black problem. This is an American problem."

Noah then turned his sights on Lahren, who's been a vehement dissenter of the BLM movement.

"Why are you so angry?" The "Daily Show" host asked, and though she insisted she wasn't angry, her comments, demeanor, and historical behavior told a different story.

At one point during the video, Lahren referred to Trump protesters as "crybabies with nothing better to do than meander around the streets with their participation trophies and false sense of purpose."

Noah later called Lahren out over her tweet & delete that occurred over the summer, which called the Black Lives Matter movement the "new KKK."

When she became visibly uncomfortable, Trevor pressed Tomi over just how black Americans should exercise their First Amendment rights if they're not protesting or bringing things to the forefront of culture, politics, the economy, or education. Her answer? "It's controversial ... but I think there's some things that need to be said."

Lahren also claimed that she wouldn't be put into a box, but entirely contradicted herself by saying, "I'm a Millennial; I don't like labels."

After this, the internet on the whole pretty much realized that Noah roasted Lahren to a crisp, and that it was time for bed.

"For someone who's not racist, you have to spend a lot of time saying you're not racist," Trevor quipped, right before Lahren went full-blare, screeching that she "doesn't see color." Many thought that it was interesting that she didn't "see color," but could see the KKK where it was absolutely not.

Judging by her social media presence, Lahren stayed up half the night to thank Noah in an almost gracious manner. She wrote, "I had a great time with @Trevornoah on @TheDailyShow and I respect our obvious differences but common goals." Today, she actually answered some of the questions she punted back to Noah with non-answers and cliche catchphrases.

Check out this random gem with regard to black Americans exercising their First Amendment rights -- on Twitter, Tomi said, "I'll answer your [question]. How should a black person object to a perceived system of oppression? Voting would be a good start." Unfortunately, Lahren seems to be confusing suffrage rights with free speech.

The Twitter reactions, by and large, were almost the best part of the entire ordeal.

Check out some of the more outlandish -- or spot-on! -- conclusions after Trevor and Tomi faced off.

I encourage you to go watch @Trevornoah interview Tomi Lahren. He beautifully destroys her angry and racist agenda.

That was the best line ...LOL

Trevor Noah: "So what do you do at a traffic light
😂😂 pic.twitter.com/6Otw0xAcuQ

Tomi Lahren has never met logic and basic reasoning before, has she? Bless her tiny, racist, ignorant little heart.

Weigh in on the comments below -- who do you think "won" last night's debate on "The Daily Show?"