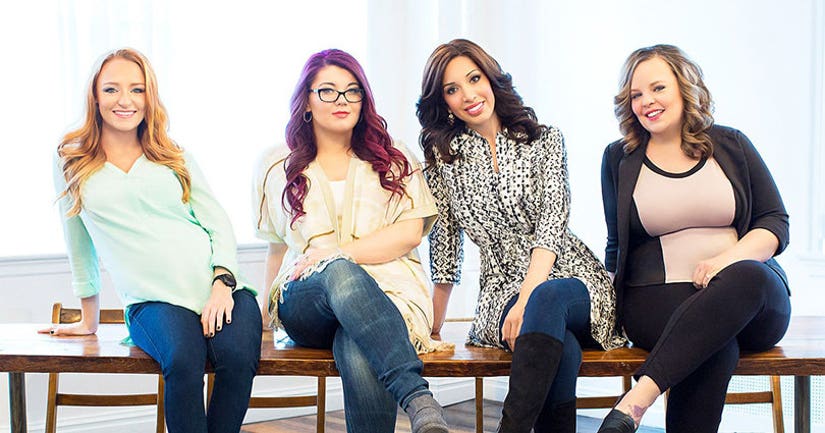 UPDATE: Farrah Abraham released a statement about Amber's exit ... and she thinks she'll be back.

"I'm out of the drama. None of the girls will quit — they like the attention, need the money and their boyfriends need the money too much to quit," she told Us. "I get Amber is embarrassed of her actions, but she flip flops and will be right back to filming. This is dramatic. She can quit and not make it public if she really was done."

"I'll be leaving #teenmomog sadly," she wrote alongside a photo of the cast. "The lack of respect is too much anymore! But still sending all my love!"

She also posted on Twitter: "Sad to say but I'm not going to be apart of #Teenmomog. The way I have been portrayed and treated is unfair. @MTV sending all my love. If I was treated fairly it wouldn't be an issue but it's been nothing but disrespect since the reunion show. Which keeps continuing today."

"Nothing has been dealt with or has made me feel any safer to even move on with people who have continuously hidden things from the network," she continued. "The day I'm shown some respect by the people I've worked with for 8 years is the day I'll be back. I've sacrificed a lot for this show."

Portwood put co-star Farrah Abraham on blast during the reunion special, before rushing the stage to fight her.

When asked by Dr. Drew Pinsky if things were cool between then, Amber made it very clear they weren't.

"We used to be and then she decided to open up her crooked lips. She decided to do an interview saying something about how it's good that [Amber's daughter] Leah is with Gary and how my house probably smells like piss. You don't do that," Portwood explained. "She's been mean to Catelynn, Maci, my fiancee, Taylor, everybody on this show and her piece of s—t boytoy Simon."

When Dr. Drew then asked if she could stay more positive at all, Portwood then went in on how Pinsky treats Abraham and how it should change.

"Dr. Drew, do not let her get away with what she does, and you do. You need to call her out more when she's sitting on this stage," Amber demanded. "You let her get away with a lot of things. The way she speaks to the crew, the way she speaks to people in general, her mother, her father, is disrespectful and disgusting. I'm just saying what a lot of people think. She needs to change."

During Farrah's interview with Dr. Drew, she joked that Amber's boyfriend looked like a "pedophile," causing Amber to run out and confront her. Watch the video above.

Despite the major blowout, Farrah told TooFab she wasn't "really even affected" when she saw Amber charge the stage.

"You have to understand, it wasn't a surprise," she said. "I do get why everyone's like, 'This is such a big deal, wow we're surprised!', but I have to say this has been going on since I did the first reunion of the first '16 & Pregnant.'"

"I commend myself for trying to be friends with someone who does that and treats me like that, because I am the bigger person," Abraham added.

"As far as I'm concerned, I will always be a part of something I started and no bullies, no criminals, no violent sh-t is going to take me away from a show that I started," she tells us. "When it's my time to go, I'll go, but the only time that's going to be for 'Teen Mom' is when the network takes it off the air."