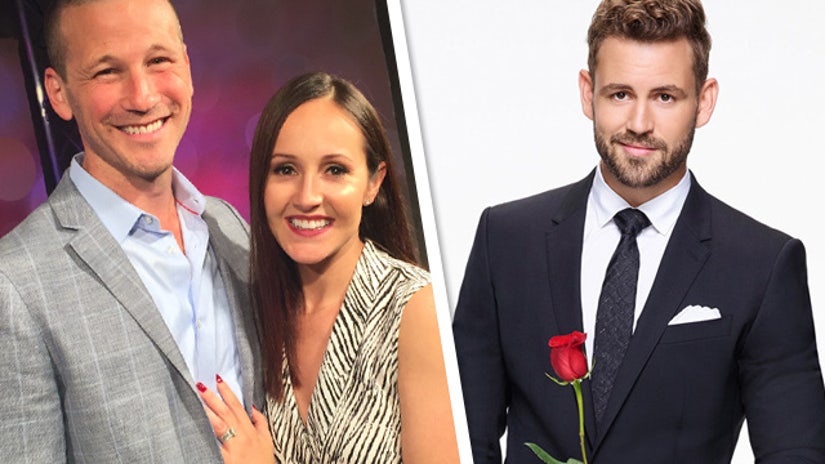 "Bachelor" nation got quite the shock when contestant Liz revealed a sexual history with this year's suitor, Nick Viall. And the move even surprised a pair of seasoned "Bachelorette" vets.

"That was sneaky of her to do that," former "Bachelorette" Ashley Rosenbaum told TooFab about Liz, who had a one night stand with Viall at a wedding in 2016. "I'm just glad that he knew who she was at first!"

"I was really hoping he wouldn't know who she was," joked JP Rosenbaum. "It didn't make him look bad at all. He made the effort even after he hooked up with her. She didn't want to pursue it. Why now? 'I wanna be on TV,' that's gotta be it. 'Now's my moment.'"

While Nick was a controversial choice for the face of the new season, the Rosenbaums stood firmly behind the decision.

"I liked Nick even when he was on first one. He wasn't perfect, he wasn't trying to be something he wasn't," applauded Ashley. "I feel like he's real, I believe him. I felt like he wasn't a puppet. I feel like the things he's saying, I really believe him."

"I think he's definitely well deserving," chimed in JP. "He's been through a lot, even by 'Bachelor' standards. Even when he was on 'Paradise,' I think he carried himself very well. I think he's in the right place emotionally and mentally too. We're rooting for him."

It's been six years since Ashley first appeared on Brad Womack's season of "The Bachelor," and a little less than that since her season of "The Bachelorette," where she gave JP as her final rose. While the couple is one of the few still standing strong after the show, all these years later, there's one thing they're sick of being asked.

"What's the secret to keeping it work?" Ashley revealed. "There's no secret!"

"It's the same thing as dating in real life," added JP. "It either works, you get along and you move forward or you don't and it ends. Yes, it was a little strange how we met, but we're normal people, we go back to normal lives."

"Think about your life, you're dating all these people, you're breaking up with people. I don't think it's too surprising," she said, admitting "we're kind of on a roll right now" when it comes to "Bachelor" nation breakups.

Check out the video above to see which reality show JP would love Ashley to appear on next -- and catch the two on the current season of "Marriage Boot Camp: Reality Stars," premiering Friday night on WE tv.