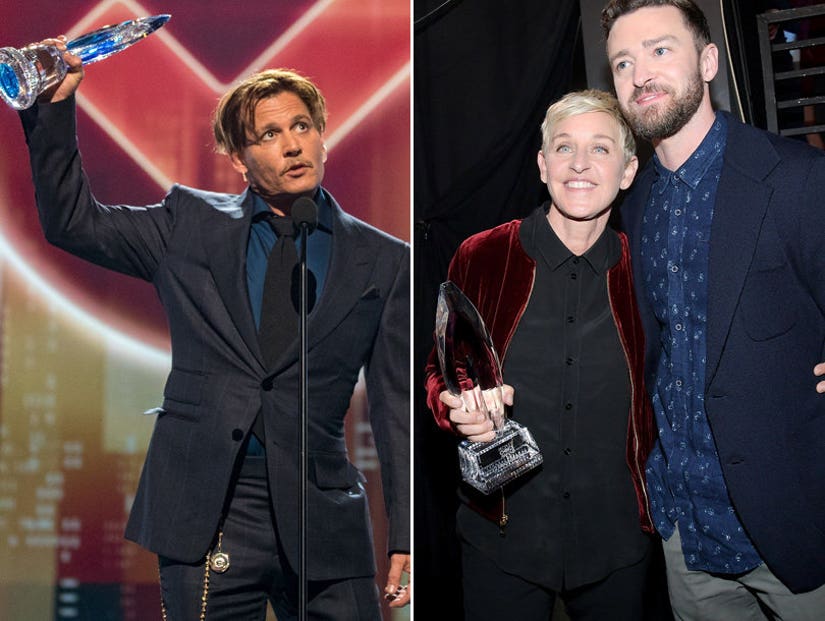 The 2017 People's Choice Awards were as predictable as usual on Wednesday night since its pretty easy to determine who's taking home awards simply by what stars show up.

Here are the 5 buzziest moments of the night:

Johnny Depp's gratitude for support throughout his divorce from Amber Heard.

While accepting the Favorite Movie Icon Award during the show, Depp told the audience, "I came here for one reason tonight and one reason only. I came here for you, the people, who through whatever good times or bad, you know, have stood by me, trusted me. Thank you. ... "I was very deeply affected by the kindness of your recognition and by the well wishes to my family and to myself, which is why it's especially meaningful to me to be here in front of you and say thank you and tell you that I truly feel that need to thank you because in all honesty we all know that none of us, especially me, wouldn't be standing up here if it wasn't for you tonight."

See the video (below) and continue reading for more story.

Justin Timberlake awarded DeGeneres the milestone award and had awards show staff bring out every People's Choice Award that Ellen ever won.

McHale's opening monologue noted that Ellen DeGeneres has won so many People's Choice Awards over the years that "we might as well rename them the Ellen DeGeneres Awards For Excellence In Ellen DeGeneresing." McHale also took a jab at the 2016 election season and said, "The People Choice Awards are the one night of the year where Hollywood reacts positively to what the middle of the country thinks."

During his acceptance speech for Favorite Song, the singer said:"If you are [watching] buddy, then the Nanny is fired. I love you and go to bed... You're the reason why I wrote this song."

During the group's acceptance speech, the girls thanked their fans and their families, but conspicuously absent was a nod to former member Camila Cabello.

See the acceptance speech video (below) as well as their "Work From Home" performance and continue reading for the complete winner's list.

Bill Murray in The Jungle Book

Kevin Hart in The Secret Life of Pets

How to Be Single

WINNER: Me Before You

Alice Through the Looking Glass

The Secret Life of Pets

WINNER: The Girl on the Train

How to Get Away with Murder

It's Always Sunny in Philadelphia

WINNER: Orange is the New Black

Once Upon a Time

Dancing with the Stars

WINNER: Man with a Plan

WINNER: This Is Us

Panic! at the Disco

Conan O'Brien's Ride Along with Ice Cube and Kevin Hart