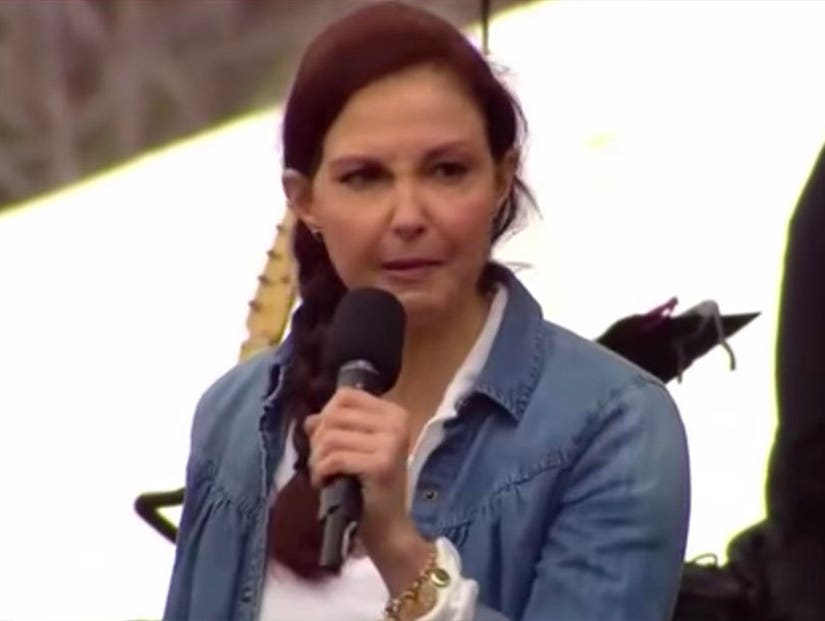 Ashley Judd moved the crowd to tears and cheers during her speech on Saturday at the Women's March on D.C. as she talked about feeling "Hitler" in the streets.

"My name is Ashley Judd and I am a feminist. And I want to say hello to Independence Avenue in the back, all the way down to 17th Street, and I bring you words from Nina Donovan, a 19-year-old in Middle, Tennessee," Judd said. "She has given me the privilege of telling you what she has to say: 'I am a nasty woman. I'm as nasty as a man who looks like he bathes in Cheetos dust. A man whose words are a distract to America."

Of equal rights, Judd said "blacks are still in shackles and graves just for being black," and that she "didn't know devils could be resurrected but" that she feels "Hitler in these streets."

"A mustache traded for a toupee. Nazis renamed the Cabinet Electoral Conversion Therapy, the new gas chambers shaming the gay out of America, turning rainbows into suicide," Judd said. "I am not as nasty as racism, fraud, conflict of interest, homophobia, sexual assault, transphobia, white supremacy, misogyny, ignorance, white privilege ... your daughter being your favorite sex symbol, like your wet dreams infused with your own genes. Yeah, I'm a nasty woman — a loud, vulgar, proud woman."

But Judd said the message of millions of women marching is not "nasty like the combo of Trump and Pence."

"We are here to be respected. We are here to be nasty. I am nasty like my bloodstains on my bed sheets. We don't actually choose if and when to have our periods," Judd said. "Tell me, why are pads and tampons still taxed when Viagra and Rogaine are not? Is your erection really more than protecting the sacred messy part of my womanhood? Is the bloodstain on my jeans more embarrassing than the thinning of your hair?"

She added: "And our pussies ain't for grabbing. They're for reminding you that our walls are stronger than America's ever will be. Our pussies are for our pleasure. They are for birthing new generations of filthy, vulgar, nasty, proud, Christian, Muslim, Buddhist, Sikh, you name it, for new generations of nasty women. So if you a nasty woman, or you love one who is, let me hear you say, hell yeah."

Watch the video (below) for Judd's full speech.