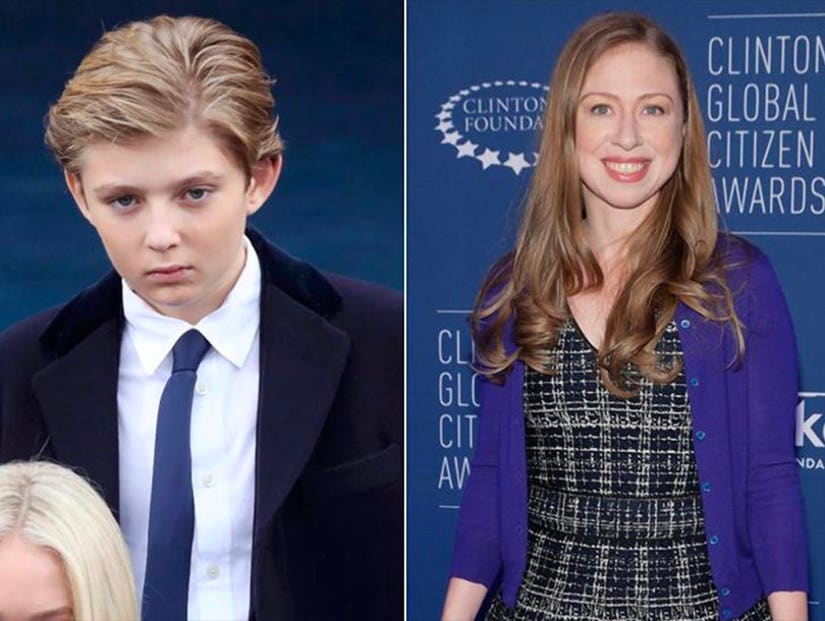 Former First Daughter Chelsea Clinton took aim at those who've been mocking the First Son Barron Trump while simultaneously taking a swipe at his President father.

"Barron Trump deserves the chance every child does - to be a kid," Clinton shared on her social media accounts. "Standing up for every kid also means opposing POTUS policies that hurt kids."

See the tweet (below) and continue reading for more story.

Barron Trump deserves the chance every child does-to be a kid. Standing up for every kid also means opposing @POTUS policies that hurt kids.

Being a child of a former President herself, Chelsea's comments come on the heels of jokes that were made about the youngest Trump on social media during and after his father's inauguration. Over the weekend, Mediaite reported that "SNL" writer Katie Rich tweeted and deleted a contentious message about the President's son.

The tweet reportedly read: "Barron will be this country's first homeschooled shooter."

"Modern Family" star Julie Bowen also caught flack for some jokes she made on her Instagram page on Friday, commenting on Barron's behavior during the inauguration.

Clinton is no stranger to being the target of mockery herself, as her looks were criticized during a 1992 airing of "Saturday Night Live." During a "Wayne's World" skit comedian Mike Myers referred to Clinton as a "babe in development," negatively comparing her to the Al Gore's daughters, who he referred to as "Babe-raham Lincoln."

Though the snippet was edited out, the spoof prompted an apology from NBC, Myers and Dana Carvey, as well as "SNL" creator and executive producer Lorne Michaels. Michaels wrote, "We felt, upon reflection, that if it was in any way hurtful, it wasn't worth it. She's a kid, a kid who didn't choose to be in public life."