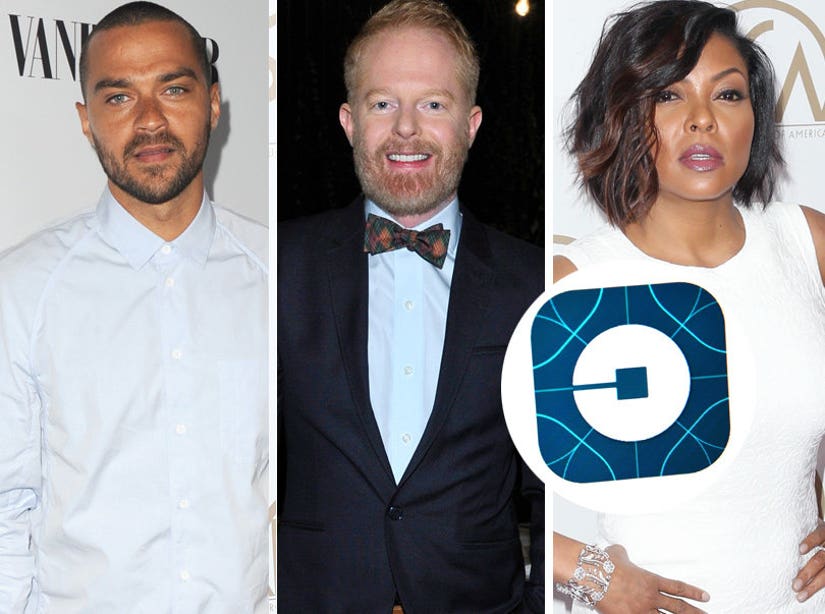 Taraji P. Henson, Jesse Williams and Jesse Tyler Ferguson were among the celebrities who jumped into the #deleteuber fray over the weekend after users on social media vowed to delete their Uber accounts when the company appeared to be capitalizing on the anti-Muslim ban protests at local airports.

It all started on Saturday when taxi drivers at airports in New York stopped transporting customers and stood in solidarity with protesters.

Uber then released a notification that they would stop the current surge pricing and be happy to transport people around the airport (banking on that fact that people who need rides won't be able to take a taxi, so Uber would be their next option. Translation: Big bucks for the company).

Surge pricing has been turned off at #JFK Airport. This may result in longer wait times. Please be patient.

Naturally, Uber's flap over the Muslim ban protests coupled with its CEO's ties to Trump caused uproar on social media, promoting the hashtag #deleteuber. Uber users everywhere were deleting the app, and posting photos showing their solidarty in support of protesters everywhere.

Alternate ride share company, Lyft also reacted to the immigration ban by releasing a statement to all of its customers.

“We created Lyft to be a model for the type of community we want our world to be: diverse, inclusive, and safe.

This weekend, Trump closed the country's borders to refugees, immigrants, and even documented residents from around the world based on their country of origin. Banning people of a particular faith or creed, race or identity, sexuality or ethnicity, from entering the U.S. is antithetical to both Lyft's and our nation's core values. We stand firmly against these actions, and will not be silent on issues that threaten the values of our community.

We know this directly impacts many of our community members, their families, and friends. We stand with you, and are donating $1,000,000 over the next four years to the ACLU to defend our constitution. We ask that you continue to be there for each other - and together, continue proving the power of community.”

After strong support from Lyft, Uber saw a significant drop in customers as thousands (if not more) deleted their accounts. Celebrities urged fans to make a statement and immediately switch to Lyft or any other ride share companies that aren't associated with Trump.

Thank you @lyft! @Uber deleted! Proud of this support to the @ACLU. https://t.co/Geowi73NTU

The boycott is on delete #uber get #lyft or #juno just as good and they dont track u when its off either!!

Went ahead and did that but don't forget to support the Taxi Workers' Alliance as well. https://t.co/XxzbdEUAYz #deleteuber pic.twitter.com/bJlG2BvD8V

Uber recognized that social media had seeming taken matters into their own hands, causing them to lose significant customer base as well as support from major clients.

Later Saturday, Travis Kalanick released yet another statement in his support for his drivers in regards to immigration and the travel ban:

At Uber we've always believed in standing up for what's right. Today we need your help supporting drivers who may be impacted by the President's unjust immigration ban.

Drivers who are citizens of Iran, Iraq, Libya, Somalia, Sudan, Syria or Yemen and live in the US but have left the country, will not be able to return for 90 days. This means they won't be able to earn money and support their families during this period.

So it's important that as a community that we do everything we can to help these drivers.

Here's what Uber will do:

- Provide 24/7 legal support for drivers who are trying to get back into the country. Our lawyers and immigration experts will be on call 24/7 to help.

- Compensate drivers for their lost earnings. This will help them support their families and put food on the table while they are banned from the US;

- Urge the government to reinstate the right of U.S. residents to travel—whatever their country of origin—immediately;

If you are a driver or a friend or family member of someone who has been affected, please contact us at: https://goo.gl/forms/AIJTivooFxuExX1p1.

Uber is a community. We're here to support each other. Please help Uber to help drivers who may be affected by this wrong and unjust immigration ban.”

Thousands of customers on social media claimed it was just “a little too late” and that his role on Trump's team was the first straw, and the actions against solidarity with protesters over the weekend was the last. The interesting thing is because Lyft and Uber are essentially the same exact service, letting go of one for the other is of no real harm to customers. This is perfect example of how easily someone can generate a significant loss when citizens band together for moral and civil issues.

The latest PR battle for Uber is still a question of authenticity, being that this $3 million pledge came only AFTER Lyft showed instant support and solidarity with immigrants, refugees and protesters around the world.