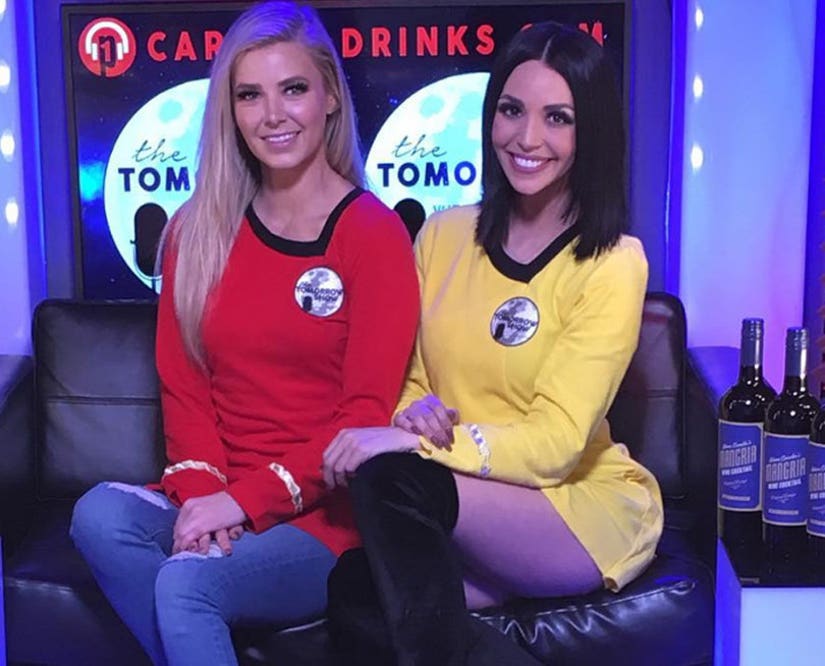 What happens in Vegas doesn't stay there when it involves Scheana Marie, as the "Vanderpump Rules" star spilled some details on a same-sex hookup with co-star Ariana Madix.

The two reality stars appeared on AfterBuzzTV's The Tomorrow Show With Keven Undergaro on Thursday, where they opened up about their one-night fling, Lala Kent and Scheana's ex, Michael Shay.

The conversation got off to an interesting start when Madix revealed she once took a dip in "the lady pool," a revelation that led to another surprise from Marie.

"The lady pool for me was not like, a, 'Let's kiss in front of boys,' kind of thing. It was a little more involved," revealed Ariana. "Basically we were like, best friends but we also, you know, had an attraction to each other. We were also, like, helping each other with, like, guy relationships and I don't know, it was, it was complicated."

When the show hosts asked if Madix and Marie had ever hooked up, they spilled the beans.

"There was that time in Vegas, in the casino, when we made out," Marie revealed, leaving Madix in shock as she struggled to recall the interaction. "Oh my God! Oh, we were so drunk, oh my God," she said, finally remembering.

"We were wasted," added Scheana.

As Madix told it, the two were in Vegas with Tom Schwartz and Tom Sandoval, when they broke off on their own for some girl time. "At one point, we all went out together, and then Scheana and I kinda like disappeared off in the casino somewhere together," she said, "and then they, like, found us. I think [Tom] was kinda, like, 'What the f...?'"

Later, talk turned to Lala Kent and Michael Shay and whether either will show up at this year's reunion special. Kent left the show mid-season and has sparred with her co-stars on social media since, while Scheana filed for divorce from Michael back in November.

"I don't know if [Michael] Shay's going to show up to the reunion, but you know, it's like you never know what can happen...I mean, he's in a contract so who knows," she said of her ex.

When asked if she'd still attend if he popped up, Marie responded: "I don't have a choice, that's my job, I'm not gonna let anyone get in the way of my job. If it happens, you know, that's what I signed up for. I put my entire relationship and life out on the show. Everyone else has to film with their exes, I'm not immune to that."

As for Kent, both Ariana and Scheana would like her to be there ... and to return next season.

"I think she should be there too," said Shay. "I think she was a good addition to our show. She brought that Brandi Glanville aspect to it. It was just a spice that was brought to our show and I think it should stay.."

"On the reunion, they're all gonna be asking me s--t about her, coming at me, asking me questions and I can't answer for her," added Madix.