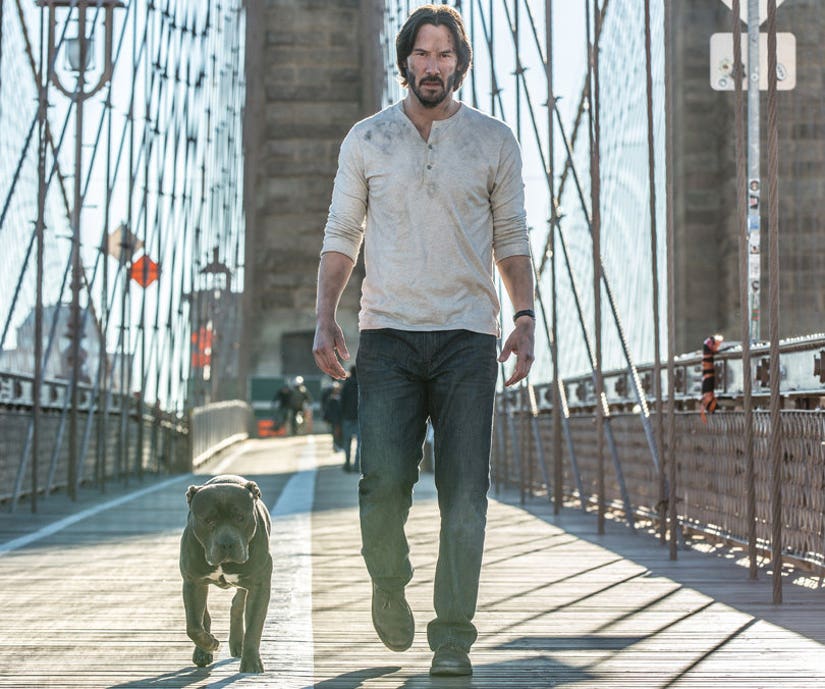 "John Wick: Chapter 2" blasts into theaters this weekend, and if you're on the fence about buying a ticket, critics overwhelmingly agree: It's well worth the price of admission.

The follow-up to the unexpected 2014 action hit starring Keanu Reeves as a retired assassin avenging the death of his dog has an impressive 94 percent "fresh" rating on Rotten Tomatoes, with just one "rotten" review counted, so far. While reviews stopped short of calling the sequel better than the first, the majority agree it's certainly as good.

Here are 5 reasons critics are in love with Wick, starting with the man, the myth and the legend himself:

“Reeves is back in fine form, confirming how indispensable he is to the franchise with his lithe physicality, no-nonsense demeanor and impressive skill set, as he again performs many of his own driving and martial arts stunts. Returning screenwriter Derek Kolstad reaffirms the appealing ingenuity of his highly memorable lead character, whose clear motivations for underworld score-settling are both relatable and rootable. Once again, Reeves does not disappoint, fully inhabiting Wick by channeling his rage over life's injustices into an intensely focused performance.” - Justin Lowe, Hollywood Reporter

Ruby Rose, Common and Lawrence Fishburne Are Excellent Additions to the Cast

“Playing the Bond-worthy mute henchwoman Ares, Ruby Rose is excellent as one of the primary and significant threats to John; and armed with his very own vengeance tale that could very well be its own movie, Common is awesome as Cassian, who has his own very personal reasons for wanting to see the eponymous hero die. Add the cherries on top that are Django himself, Franco Nero, as the manager of the Rome Continental, and the great Lawrence Fishburne as the leader of a homeless spy network in New York (it's as awesome as it sounds), and you have yourself a movie that is never falling short in the badass department.” - Eric Eisenberg, Cinemablend

“And what a stupendously entertaining ride it is. Director and former stuntman Chad Stahelski is back in the director's chair, and he knows his craft inside out: every punch lands hard, every gunshot roars like thunder. Neon-lit and gloomy, the film is lovely to look at – think Nicolas Winding Refn without the pretension. The humour is charmingly self-deprecating – a series of adversarial grunt-offs between Reeves and fellow assassin Cassian (Common) are a highlight – and the testosterone-heavy supporting cast is terrific: Laurence Fishburne, Franco Nero, Ian McShane, 'Warriors' legend David Patrick Kelly and even Peter Serafinowicz all grab their moment in the spotlight. But it's Keanu's film, and he's a joy to watch: loose, long-limbed and achingly cool in a three-piece black suit, he makes mass murder look completely effortless.” - Tom Huddleston, TimeOut

Beautifully Choreographed Violence (If You're Into That Sort of Thing…)

“The biggest compliment I can think to pay 'John Wick: Chapter 2' is that I lost track of the body count within the first 15 minutes. If that sounds like high praise to you, too, then you will absolutely dig Keanu Reeves' gratuitously crunchy ode to choreographed ultraviolence via the bullet, the bare knuckle, and the everyday No. 2 pencil. - Chris Nashawaty, Entertainment Weekly

“There's a quality to the violence here that elevates it above the literal (and reprehensible) nihilism of movies like last year's 'Hardcore Henry,' and instead achieves something more akin to dance. The 'John Wick' movies accomplish what Hong Kong action flicks did a quarter-century ago, seducing bloodthirsty (predominately male) audiences into appreciating an exquisitely choreographed modern ballet.” - Peter Debruge, Variety

It's Not Only a Good Sequel - It's Worthy of Another Sequel

“As it goes in the blockbuster world these days, the door is kept swinging wide open for 'John Wick: Chapter 3,' but screenwriter Derek Kolstad not only earns that right, but the storytelling creates a genuine anticipation for what happens next. And as long as Kolstad, Stahelski and Reeves manage to perfectly blend the ingredients that make 'John Wick' work despite all odds, we'll be ready for more.” - Kevin Jagernauth, The Playlist