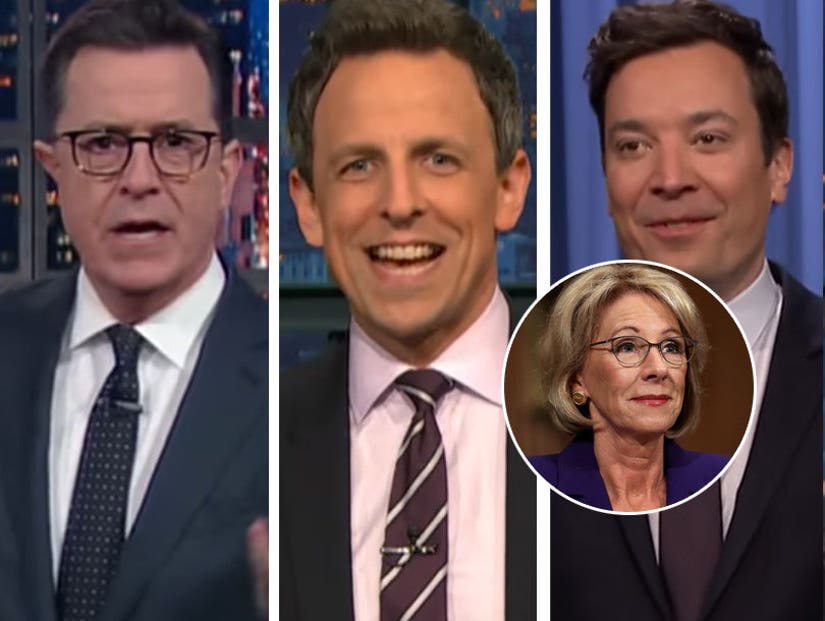 Late-night TV was stirring with contempt for Betsy DeVos: Jimmy Fallon, Seth Meyers and Stephen Colbert all "roasted" the newly confirmed Secretary of Education in their own ways.

The Hollywood backlash on Tuesday was palpable across social media given DeVos' bumpy confirmation hearings, where she seemed to lack a basic understanding or knowledge of the country's public education system.

DeVos barely skimmed by with a Senate vote of 51-50 (thanks to VP Mike Pence) “or as Trump calls that, a landslide,” Fallon joked on Tuesday's “The Tonight Show.”

“There was actually a 50-50 tie vote that was broken by the Vice President, which makes the vote for Education Secretary the only place where 51 is a passing grade,” Fallon continued.

DeVos won by the closest margin in Senate history.

Seth then took a jab at Mr. Prez after the leader of Iran said Tuesday that Trump represents the real face of the U.S.

“Are you kidding me? Trump doesn't even represent his own real face!”

“The Late Show”'s Stephen Colbert added “Woman Ahead of You at Starbucks with a Really Complicated Order” to Betsy's new title, adding that she's “never attended, worked in or sent her kids to public school, so how did she get the nomination? Well, there's a tiny chance that money played a role since DeVos' family gave around $200 million to Republican causes, including donations to four senators on the committee overseeing her confirmation.”

“That reminds me of a math problem,” Colbert continued. “Betsy has $200 million. She needs 50 votes. How much money can she give to each senator to make sure public schools get less?”