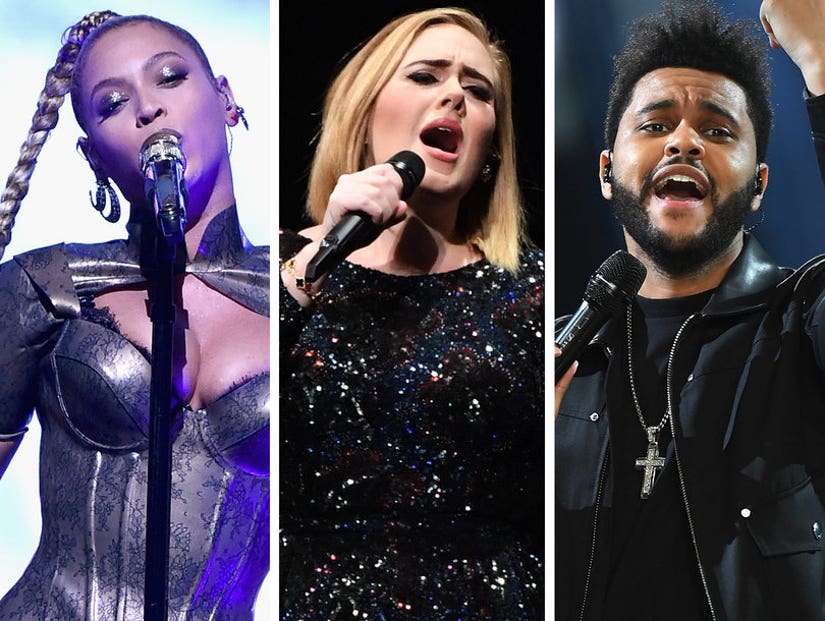 Beyoncé, The Weekend, Adele and Bruno Mars are among the music superstars who killed it at the Grammy Awards Sunday night, and TooFab has all of the videos for your instant replay pleasure.

See who rocked, who rolled, and who cursed during the live telecast on CBS.

Adele:She opened the show with her hit song "Hello" and gave all of us chills.

James Corden:The Grammys host followed Adele with a (purposely?) disastrous musical number, but saved himself with a creative rap.

The Weeknd and Daft Punk:The dynamic duo teamed up to take us to the future by lighting the stage with pink and blue lasers on top of a huge mountain center stage.

Keith Urban and Carrie Underwood:The country music stars came together for one boot stomping performance of Urban's "The Fighter." Although both performers make a living off of country fans, the performance may have pleased soft rock and pop fans, as well.

Ed Sheeran:The 25-year-old singer always sounds amazing, but the visual aspect of the performance just didn't really keep our attention this year. However, his use of a custom loop pedal enthralled viewers so much, they're curiosity crashed an online musicians' gear database.

Kelsea Ballerini and Lukas Graham:The Nashville singer/songwriter and Danish pop group came together with a mashup of "7 Years" and "Peter Pan" and it surprisingly worked a lot better than we all expected.

Beyoncé:The performance we were all waiting for. First of all, we finally got to see how pregnant Queen B is, which may explain why she chose to sing her slower songs, "Love Drought" and "Sandcastles." But even with the slower pace, she took things to a whole new level with holograms, goddess-like outfit and a performance like no other. Slay on, girl.

Bruno Mars:The pop star channeled his love for '90s R&B in this year's Grammy performance by mashing his songs "24K Magic" and "That's What I Like" with a more soulful pace that glorified his wonderful voice. His performance did get a little awkward though when he wanted to "talk to the ladies for a second" about how beautiful they all looked tonight in their new dresses.

Katy Perry:Katy Perry sounded great while singing her new song "Chained to the Rhythm" live at the Grammys and didn't shy away from making a political statement at the end when the stage got black and a "We The People" sign projected onto the stage.

Maren Morris and Alicia Keys:A Grammy newbie joined forces with a Grammy veteran for a powerful performance that filled the Staples Center with beautiful harmonies.

Adele's George Michael tribute:This performance, at first, was marred by Adele stumbling early on, cursing and even starting the song over - but it ended with the entire crowd giving her a warm standing ovation.

Lady Gaga and Metallica:The pop star and heavy metal band rocked out to to Metallica's "Moth Into Flame" on the Grammy stage. There was an unfortunate microphone mishap which prevented *James Hetfield's voice from being heard, at first, but they handled the technical difficulty like pros and ended up sharing the microphone. Gaga even went crowdsurfing.

Busta Rhymes, Consequence, Anderson .Paak and A Tribe Called Quest's Phife Dawg tribute:This major crew of hip-hop artists came together to perform “We the People” and calling the piece political would be an understatement. They had their dancers dressed as police, Busta yelled “President Agent Orange” to the crowd and all of the rappers punched their fist into the air to start a “resist” chant.

The Time and Bruno Mars' Prince tribute:No one knows how to honor Prince more than his former band The Time. It was a fun, funky performance and then Mars joined on stage in a sparkly purple suit jacket nailing an awesome guitar solo performance that gave an honorable salute to the legends guitar skills.

Chance The Rapper, Kirk Franklin and Tamela Mann:Chance The Rapper had quite the night taking home two Grammy awards and performing his best. He ran around the stage with a choir in the background preaching his lyrics. Apparently Kayne West was supposed to have a verse in this performance, but Chance The Rapper covered his part flawlessly.

John Legend and Cynthia Erivo:This performance was simply classic, respectful and beautiful as the two covered the Beach Boys' "God Only Knows".