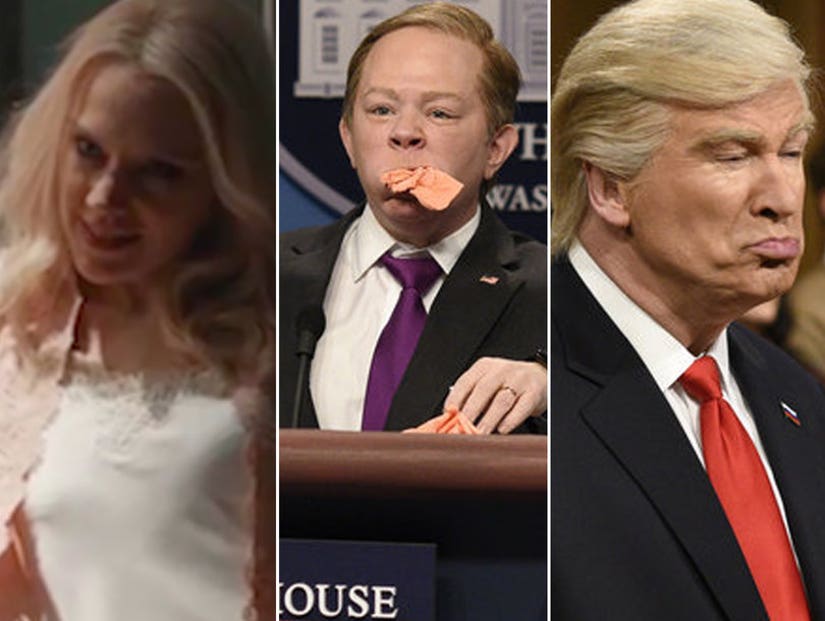 Alec Baldwin hosted "Saturday Night Live" for the record-breaking 17th time on Saturday, and the night's show featured some of the buzziest skits of the season so far.

During the skit, Kellyanne Conway (Kate McKinnon) went to Jake Tapper's (Beck Bennett) home after CNN refused to have her on as a guest.

DONALD TRUMP HAS HIS DAY IN COURT ("PEOPLE'S COURT," THAT IS)

"SNL" mocked Trump's blocked immigration ban and featured Alec Baldwin's President on "The People's Court." As a character witness, Trump called Vladimir Putin to the stand. A shirtless Putin -- called the President's "long-time crush" -- entered the court and told everyone to "lay off President Trump."

"Wrong! Overruled!" Trump yelled several times. "The bad people," he defended, "They're pouring in and you see them, and it's ISIS and San Bernardino and Chicago. Look at Chicago. It's hell. They're bad dudes coming in here, bad hombres, bad boys bad boys, whatcha gonna do?"

Melissa McCarthy took Sean Spicer's advice to tone down her portrayal of him on Saturday Night Live.

McCarthy reprised her role as Spicer for the second weekend in a row, attempting to portray a less "spicy" press secretary. "I have been told that I am going to cut back on the gum chewing," McCarthy said, "so I've cut back to one slice a day." McCarthy then pulled out the largest stick of gum we've ever seen and began stuffing it in her face.

Referencing Trump's "extreme vetting," McCarthy said: "Spicy's gonna explain it so you dumb babies can understand it, so I guess I can't use my big words."

LESLIE JONES DOES DONALD TRUMP TOO

"I never dreamed that I could play the president," Jones said to the cameras. "But then Melissa plays Spicer and I was like, 'Yo, why can't I play Trump?'"

Leslie was shown in intensive training to portray the POTUS, complete with an orange toupee, "bigly" and "yuge" references in tow. Jones said that her portrayal of the president is not a jab at Trump's "fragile masculinity," nor is it a personal take on race or politics: she simply wants to give "America what it wants."

Watch for the "Melania Trump's" special appearance at the end of the video.

BALDWIN GETS ROASTED DURING HIS 17TH TIME HOSTING IN HIS MONOLOGUE

Baldwin opened his monologue thanking the show for the opportunity to host the show a record-breaking 17 times and featured photos of the actor's tenure at "SNL" since 1990, his first time hosting.

Commenting on Baldwin's younger appearance, Pete Davidson asked, "I can't believe that's you! You were so handsome!" He continued: "Were you like, so mad when you stopped looking like that?"

Baldwin brought out footage from the "Schweddy Balls" skit from the '90s and featured a video introducing an extremely young Jimmy Fallon, who played the "Ghost of 'SNL' Future."

"At what point when you get older does, like, your whole head expand?" Davidson asked.