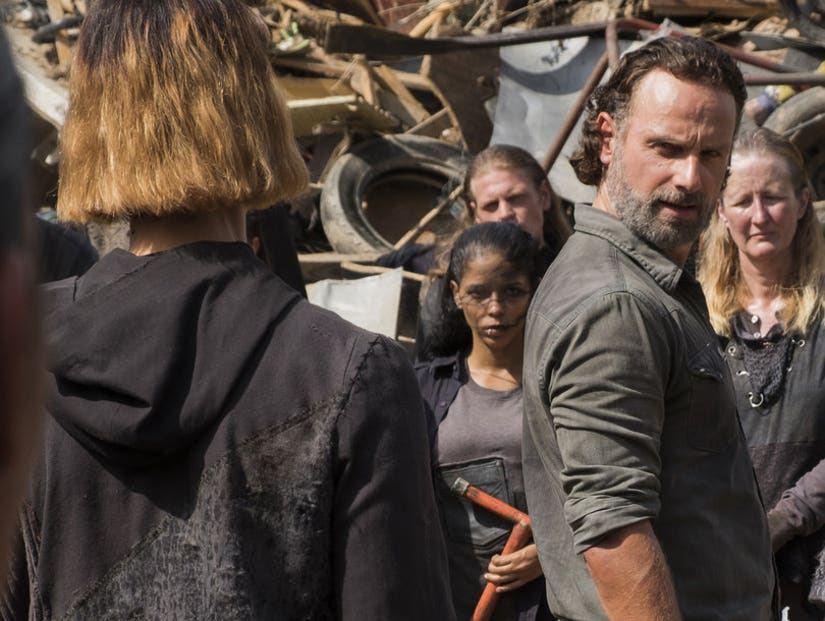 If you thought keeping track of everyone from Alexandria, Hilltop, Factory, Oceanside and Kingdom was hard enough, the world of "The Walking Dead" got even bigger Sunday night, as viewers were introduced to yet another group of survivors.

And while Rick and his crew are attempting to form a militia to rise up against Negan and the Saviors, they learned some of these other groups are going to need a lot of convincing.

Could this new community of "Mad Max" castoffs be just the people they're looking for? Here are 5 lingering questions we have after watching "Rock in the Road."

1.) Who Are 'The Others' and How Is Gabriel Involved?

The episode began with Gabriel breaking into Alexandria's storage locker in the middle of the night, snatching up all the food and guns he could get his hands on before driving off in a car to places unknown.

Viewers later learned the preacher left a clue to his whereabouts in the inventory notebook though, writing "BOAT" in large letters on the last page. But how did Gabriel know about said boat, as Rick and Aaron were the only two in town who knew it existed?

At this point, it seems like he learned about it from the shrouded stranger who saw the duo Alexandrians there earlier this season. How that mystery person connected with Gabriel and talked him into giving up all his community's supplies, however, remains to be seen.

Considering how things went with King Ezekiel and Gregory (more on them in a minute), we're hoping this new gang might be the extra backup Rick needs to fight back against Negan.

2.) What's With that Smile? Warning: Comic Spoilers Below

The last shot of the show was Rick smiling, an odd choice for someone surrounded by strangers wielding weapons they stole from you. But was that a grin of shock and surprise ... or could Rick be in on it all?

In the comics, the sheriff and Jesus forge a secret plan to take out Negan by making him believe they're weak, so the bad guys will never expect a strike. Maybe, just maybe, Gabriel took the guns under Rick's orders, so the Saviors would see them as helpless when they notice the empty storage room.

The possible reason for Rick's smile? The joy of seeing his plan all come together, as he witnessed an army equipped with weapons Negan thinks have been stolen. Not a bad idea, right?

All that being said, we still have no idea who all these other people are or where they came from. 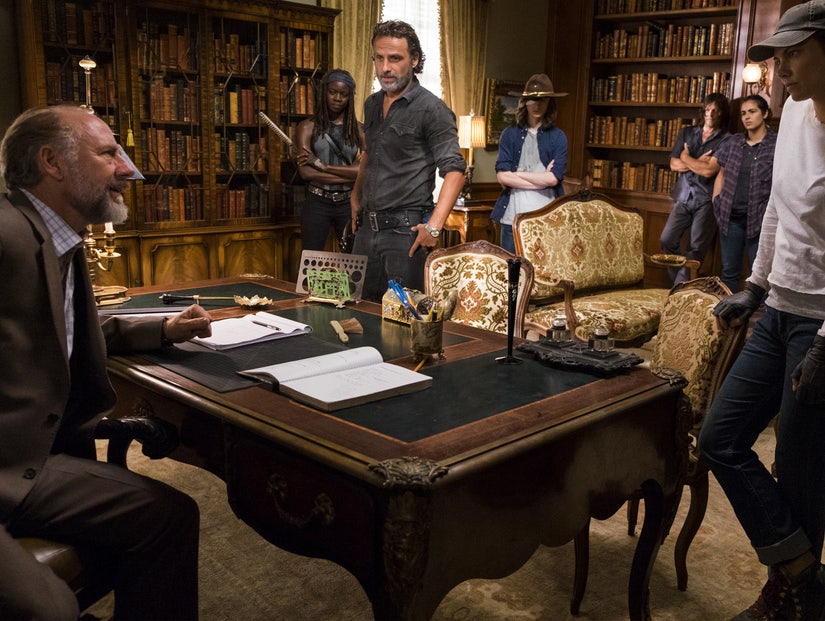 3.) When Will Ezekiel and Gregory Grow A Pair?

Both King Ezekiel and Gregory wanted nothing to do with Rick's plan to take out the Big Bad.

Gregory doesn't want to spare anybody for war. "They grow things, they're not gonna want to fight," he explained to the Alexandrians after they made their pitch. While their leader is useless, there are people at The Hilltop who do want to help though. Maggie and Enid decide to stay and train a mini battalion of fighters without Gregory's go-ahead.

The group made a similar pitch to King Ezekiel during their first trip to the Kingdom. This too did not go well. After the shock of seeing the King's tiger wore off, Rick pleaded for his people to join up in their fight for freedom. The group revealed how many of their own have been killed, breaking some very bad news to Morgan about Abraham and Glenn.

During his plea, Rick told a parable about a young girl who pulled a troublesome rock from the middle of the road to find gold underneath. The message: Obstacles provide opportunity for great reward and Negan is the rock that needs to be removed.

Despite Rick's expert storytelling skills, Ezekiel said he wanted to keep the secret truce he has with the Saviors ... but offered to hide Daryl within the walls of The Kingdom.

Both The Hilltop and The Kingdom have community members within their walls who are battle-ready, but will they be able to convince their leaders to join the fray?

With Daryl agreeing to stay at The Kingdom to hide from the Saviors, he's one step closer to finding out what happened to Carol.

Morgan and Ezekiel kept their deal with her not to tell the others she was alive and shacked up at a house just outside of town. Instead, Morgan lied, saying she was simply gone.

It's only a matter of time until Daryl and the Alexandrians see her though, right? Ben even ran into her in the woods. It's not like she's keeping a completely low profile.

**5.) Are Aaron and Eric Headed for Splitsville?

Yes, this is absolutely the least pressing question of the week, but a lingering one nonetheless.

How many of you forgot Aaron actually had a boyfriend? And that his name is Eric? Well, they're still a thing ... for now. It's clear these two are on completely different sides of the coin when it comes to dealing with Negan.

Aaron wants to fight, Eric doesn't want him to. "Do you want to leave, just turn our backs?" Aaron asked him. "I want us alive, both of us," is his boyfriend's response.

In the source material, Eric doesn't get his wish, as he's killed by one of the Saviors. Aaron eventually hooks up with Jesus, whose sexuality on the show remains a mystery for now.

As we look ahead, it sure seems like Rick's militia is growing ... and they have dynamite at their disposal. How long until they make their final move?

What did you think about tonight's new episode? Sound off below!