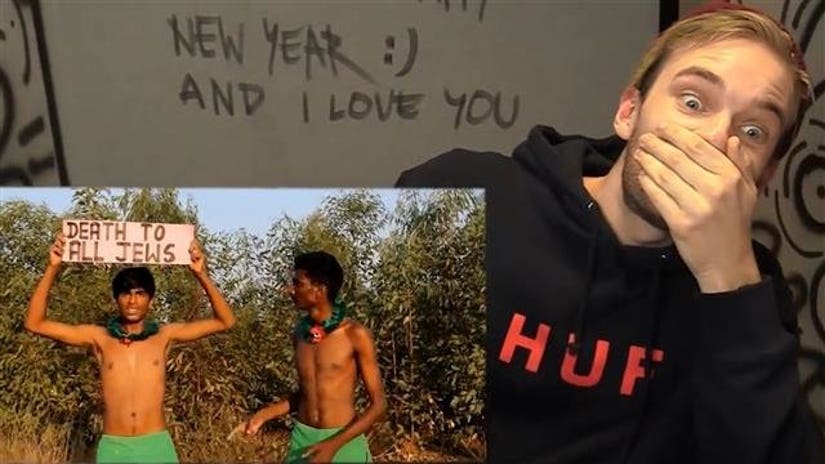 PewDiePie, YouTube's biggest star, has been dumped by major sponsors over a video in which he paid two men to hold up a sign reading "Death to all Jews."

Disney announced it was cutting ties to the online personality, real name Felix Kjellberg, after the Wall Street Journal asked the company about several videos with anti-Semitic jokes or Nazi imagery. WSJ reports that PewDiePie has posted nine such videos since August.

PewDiePie posted a video on Jan. 11 that included two shirtless Indian men laughing and holding a sign that read "Death to all Jews." He had paid the men to hold up the sign as part of a stunt where viewers paid to send them random phrases to hold up.

The video has since been deleted, and the two men later apologized with another video. "We don't really know what the message means," they said.

In a different video posted on Jan. 17, the 27-year-old Swedish gamer said that he considered the bit "a joke."

"It might just be my crude sense of humor, but I think there's something funny about that, and I don't think there's any actual anti-Semitic thing about it," he said. "Again, I think there is a difference between a joke and actual death to all Jews."

He has a record 53 million subscribers and has been the most subscribed user on YouTube since 2013. As of February 2017, his channel has received over 14 billion video views.

PewDiePie remained the highest-paid YouTuber in 2016 according to Forbes, with an income of $15 million from his YouTube Red series and his book This Book Loves You.

In a statement, Maker Studios said, "Although Felix has created a following by being provocative and irreverent, he clearly went too far in this case and the resulting videos are inappropriate."

A YouTube spokesperson said, "We've decided to cancel the release of 'Scare PewDiePie' Season 2 and we're removing the PewDiePie channel from Google Preferred."

The 10 episodes of Season 1 are still available on YouTube Red.

The controversy has blown up on Twitter, with PewDiePie's loyal fans and other YouTubers decrying Disney and YouTube for supporting "PC culture."

Apparently Disney has cut ties with PewDiePie because of his Nazi jokes.
Yes how dare he do that, Disney would never make fun of Nazies!

there are so many people in the world worse than @pewdiepie but the media saw a band wagon& jumped onto it. #youtube #Disney #PewDiePie

All beef aside, @pewdiepie getting dropped by Maker, OVER A JOKE, is absolutely ridiculous. Thank god I left them last year.

He's also received praise and support from pro-Nazi organizations, prompting him to release this statement: "As laughable as it is to believe that I might actually endorse these people, to anyone unsure on my standpoint regarding hate-based groups: No, I don't support these people in any way."

I know it wasn't his intent, but there are pro-Nazi orgs who have made @pewdiepie their posterboy for normalizing Nazis. Glad he said this. pic.twitter.com/P7Anw7uH5B

But other people - including outspoken "Harry Potter" author J.K. Rowling - have insisted that even joking about anti-Semitism is unacceptable in today's political climate.

For those who think fascism is an edgy accessory...https://t.co/aNfe3nBnyG

Felix you worked yo ass off for what you got, and everyone I know has a decent amount of respect for you, but this time around... Boy u dum.

You could have made the signs say literal anything else. ANYTHING ELSE. Y u do this? https://t.co/f2waoRnOzL

PewDiePie posted a video addressing the controversy on Thursday, apologizing for his joke but also accusing the Wall Street Journal and other media outlets of essentially staging a hit job on him.

"I'm sorry for the words that I used because I know it offended people, and I admit that the joke itself went too far," he said. "I do strongly believe that you can joke about anything, but I also believe there's a right way and not the best way to joke about things. I love to push boundaries, but I would consider myself a rookie comedian and I've definitely made mistakes like this before."

He claimed that WSJ deliberately took jokes in his other videos out of context in an attempt to smear him, saying "old-school media does not like internet personalities because they're scared of us."