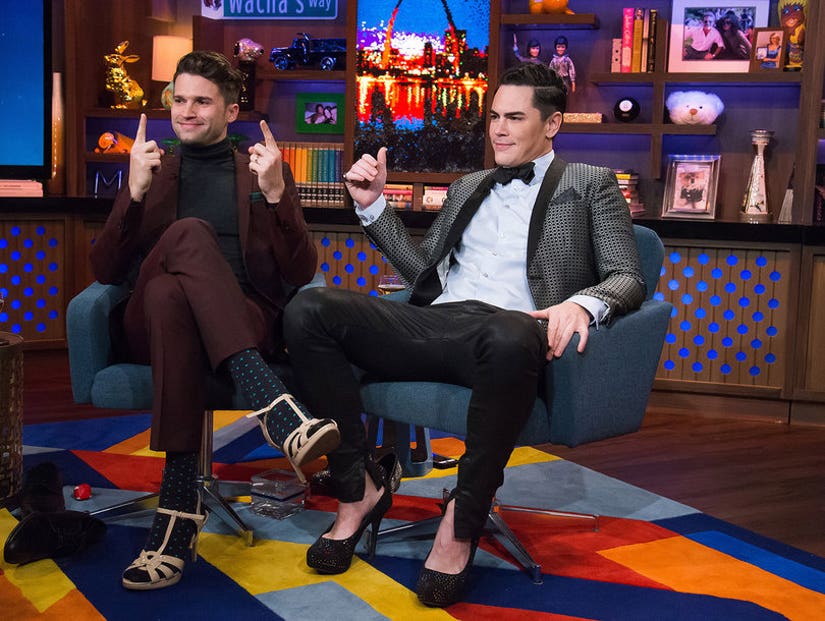 Tom Sandoval and Tom Schwartz (aka Tom No.1 and Tom No.2) sat down with Andy Cohen on "Watch What Happens Live" to talk relationships, friendships and all things "Vanderpump Rules."

Schwartz spoke about wife Katie Maloney after a fan noted that she was a "total bridezilla."

During the current season of Bravo's "Vanderpump Rules," Katie has been called out a number of times for her erratic behavior under the alias her friends coined for her, “Tequila Katie.”

“I think she's got it under control,” Schwartz said. “But really, she's shown restraint. She's reformed. She's come a long way. She's self-aware now and her inner light is shining. The darkness has gone light."

Schwartz also revealed the reason behind the couple's decision to get a prenup: "I just felt like it was the responsible thing to do. I feel like everyone should get a prenup, no?"

Despite some bumps along the way this season it appears the couple's relationship is on smooth course with Tom confirming that marriage is going well.

"I have to say from the bottom of my heart it's been blissful," Schwartz said. "She's an amazing wife."

Tom Sandoval also discussed his future plans with Ariana Madix when asked if a proposal was on the horizon saying, “I don't know. We don't need marriage, we know who we are to each other and that's what's most important.”

The episode ended with the Toms and a drunken drag themed game of Shotski Ball.