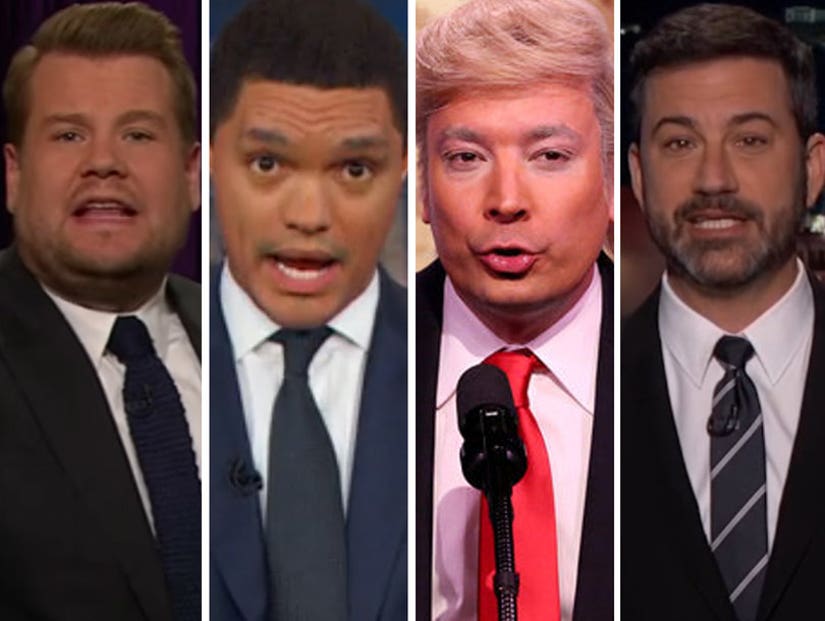 Donald Trump's bizarre press conference on Thursday was on the tip of every late-night TV host's tongue last night, and the consensus was that the 77-minute cage match with the media was one for the books.

In fact, "Daily Show" host Trevor Noah compared the President to a natural disaster and Stephen Colbert said the whole thing was "crazy."

TooFab gathered every late-night host's reaction to the heated press conference below.

"We had a really nice show planned for you," the "Daily Show" host said. "Very civil, very calm. And then, in the middle of the day, Hurricane Trump happened, again."

"You have a president of a democracy who thinks press is only valid when they ask him easy questions," Noah added. "Questions that he likes. In fact, in his mind, he deserves it. What a putz."

Over at ABC, the "Jimmy Kimmel Live" host simply called the televised event "a sight to see" while giving his viewers the general gist of what went down.

"It reminded me of something you'd see before a pay-per-view boxing event," he said, then joked that the press conference's total length of nearly an hour and a half exceeded the amount of time that Trump has spoken to his wife Melania throughout all of 2017 so far.

The host of CBS' "The Late Late Show" didn't mince any words at all, calling the president "tacky, wrinkled and strangely colored" while comparing him to the backdrop in front of which he stood.

"Knowing Trump's past I think he'd be smarter than to stand in front of a golden shower curtain," Corden said, ushering in a brief recap of what actually happened during Thursday's press conference.

The "Tonight Show" host once again donned a Donald wig and a fake tan to put his own personal spin on the presidential press conference.

"First of all, you're all fake news, I hate you all very much, and thank you for being here," Fallon said during his impersonation of the POTUS. "First question? No. Next. We've made so much progress. In fact, if you ask any American, they'll say that I've managed to make the last four weeks feel like four years. Four more weeks! Four more weeks!"

The "Late Night" host didn't hold back as he recounted Trump's "bat-s--t crazy" conference and made Russian hooker jokes. During the press conference, Trump mentioned how the public would enthusiastically appreciate a presidential order to attack the Russian ship off of the coast of Connecticut.

"Nobody would say that," Meyers said. "The only way everybody would say 'Oh, that's so great'' is if [Trump's] Russian hooker tape is on Netflix this weekend."

"It was a robust one hour and 17 minutes long. That is beefy," he said. "So beefy you could eat it with a fork. But you're going to want to use a spoon to get every drop of the crazy."