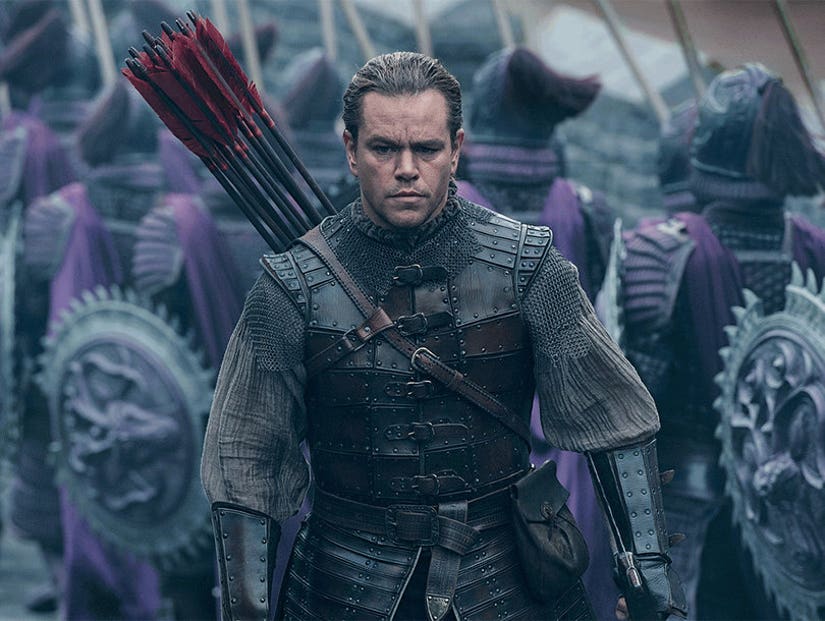 "The Great Wall" doesn't live up to the flattering adjective in its title, according to the majority of movie critics who weren't impressed by the Matt Damon monster movie.

China and Hollywood's big-budget collaboration has racked up a 38 percent "rotten" approval rating on Rotten Tomatoes, which concluded in its consensus of all 98 reviews available so far that it's "neither as exciting nor as entertainingly bonkers as one might hope."

TooFab's review ranks among the least flattering: "If you're fascinated by the business of Hollywood, and want to see what the future of international blockbuster films might look like, go see 'The Great Wall.' If you're just looking for some quality entertainment starring Matt Damon with a very bad haircut, save your money and pull up 'Behind the Candelabra' on HBO."

The movie directed by Chinese filmmaker Yimou Zhang - who foreign film enthusiasts may admire for critically acclaimed Chinese titles including "Hero" and "House of a Flying Daggers" - follows Damon and co-star Pedro Pascal ("Game of Thrones") as European mercenaries who end up behind the Great Wall of China, which they quickly learn was actually constructed to protect the country from reptilian monsters that attack every 60 years. Willem Dafoe ("Spider-Man") co-stars as the older white guy who conveniently taught every Chinese character English before the new outsiders show up.

Here are five reasons you might want to consider waiting for this monster dud to hit Netflix, if you still want to watch it at all.

For a Movie About Monsters Swarming a Giant Wall, It's Not Much Fun to Watch

"Damon makes a bizarre choice with a weird accent that seems completely removed from place and time. On the one hand, I appreciate he didn't go straight British for a period accent, but at the same time, you're always aware that Damon is straining for some odd mixture of Scottish and Irish, and it's incredibly distracting." - Matt Goldberg, Collider

"The characters are ciphers, the narrative is dull and even the sights and sounds become numbingly bombastic after a while. Even Damon seems to be struggling with his dialogue, which is anachronistically peppered with modern vocabulary (one character gets to say 'bitch'), humor (a handful of 'I heard that!' jokes), and bromantic quips between William and Tovar. And that's not to mention the sheer lack of logic in the film: Why do the Taoties only attack human beings every 60 years? Why does the army host a "crane corps," involving female soldiers bungee-jumping down the wall to lance the beasts, when there are already cannons and other artillery? And why is everybody rolling their r's when they speak?" - Clarence Tsui, The Hollywood Reporter

Another 'White Savior' to the Rescue

"'The Great Wall" is yet another narrative driven by the 'white savior' trope, with Damon's William wowing his Chinese captors with his bow skills and impressing them even more by slaying a beast by himself. Though he is flanked by literally thousands of Chinese fighters, as well as generals and strategists, he is the one who is positioned to defeat their enemy, though they've been surviving against the siege for centuries and have more sophisticated weapons. William has a magnet. Serial “white savior” offender Edward Zwick was originally slated to direct before production stalled, and this would've been right in his wheelhouse, along with 'The Last Samurai,' 'Glory' and 'Blood Diamond.' The film ultimately – mild spoiler alert – rights this wrong in its final scenes, but it isn't enough to undo the preceding 90 minutes." - Kimber Myers, The Playlist

See more: #ThankYouMattDamon Lights Up Twitter as Actor Is Relentlessly Mocked for 'The Great Wall'

It Will Make You LOL - But It's Not a Comedy

"A pure fantasy set about a thousand years ago during the Song dynasty, with admittedly gorgeous costumes and sets and some pretty cool visual effects, but scads of unintentionally hilarious dialogue and one of the most ludicrous story lines in recent memory, 'The Great Wall' is so fantastically misguided and so wonderfully bad, I could see some coming for the action and staying for the camp laughs. Mostly, though, it's a beautiful bomb. Perhaps my favorite moment comes when an army of soldiers from the Great Wall arrive via shaky hot-air balloons (!) in China's capital city, which has been overrun by thousands of human-eating, building-destroying, Jurassic-looking, dragon-lizard, paranormal monsters known as Taoties. Even as the ferocious Taoties are chomping up the city, the Emperor's guards surround the just-landed hot air balloonist soldiers, and one of the guards demands, 'What is your purpose here?'" - Richard Roeper, Chicago Sun-Times