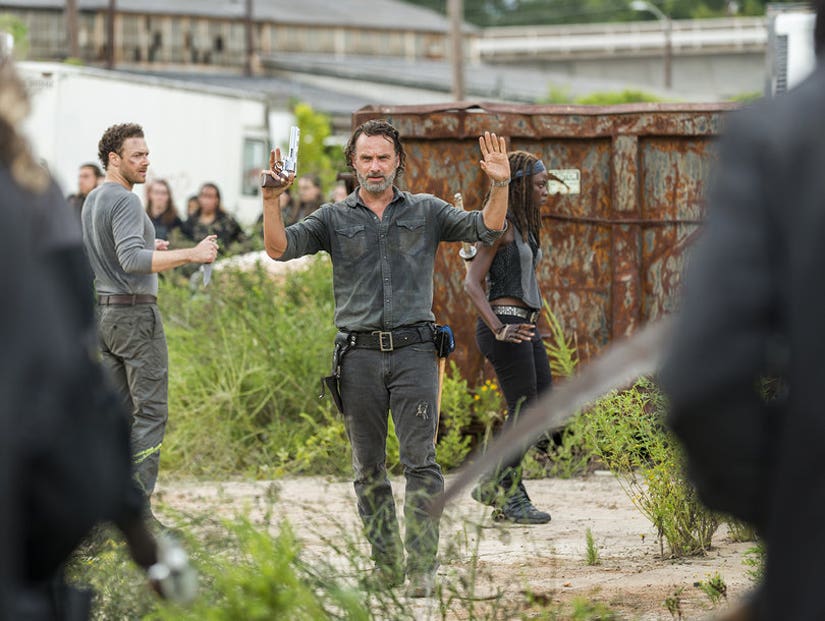 First thing's first, now we know why Rick smiled at the very end of last week's episode. And, yes, our theory was very wrong. Sorry 'bout that.

There was no secret plan happening behind the scenes with Gabriel. No hush hush mission to fool the Saviors into thinking they were weak. Rick smiled because he realized "enemies can become friends."

This Sunday's episode focused on his plan to turn the outsiders into soldiers in his war against Negan, as two other show favorites had a long awaited reunion.

Here are TooFab's 4 big questions we have after "New Best Friends." 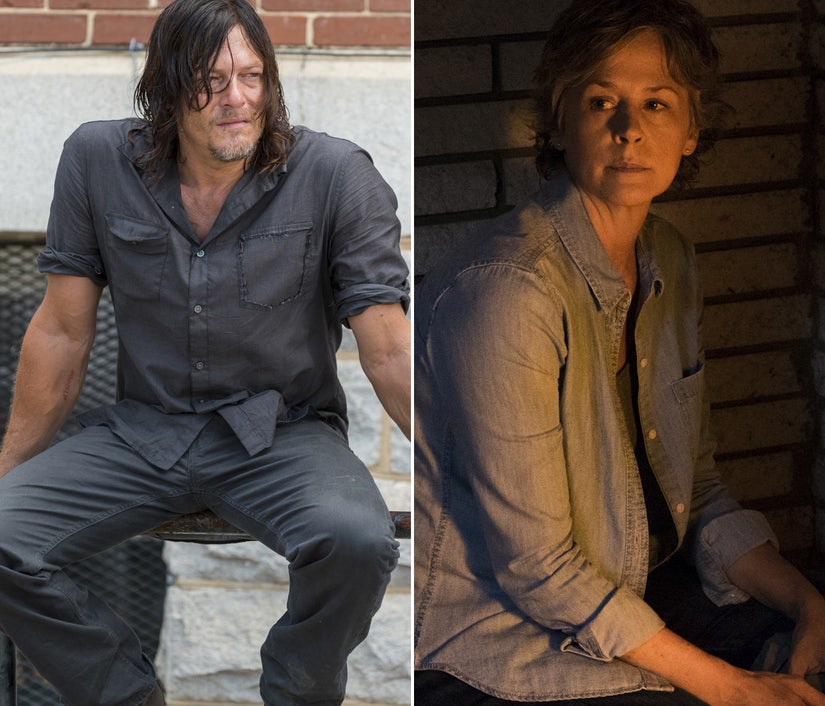 This was a bittersweet episode for Caryl stans, as they finally got the reunion they've been waiting for between Carol and Daryl, but not the one they wanted.

Daryl found out about her shack outside of town thanks to a dubious plan to get her killed by Richard (more on that later). When he arrived at her home, Carol greeted her friend with a hug, as he asked why she left. "I had do," she replied.

The two caught up over dinner, but Daryl was less-than truthful about what's been going on back in Alexandria. Instead of telling her about Glenn and Abraham's date with Lucille, Daryl told her "everyone's alright." Why? Because she told him she'd had no humanity left if she killed anyone else -- and he knew she'd return to battle if she heard what really happened. That's love.

Their reunion was the one everyone was looking forward to this season, hoping it would reignite the badass fighter in Carol followers of the show came to love. Instead, this episode came off looking like a bittersweet goodbye to a key figure. Yeah, we have a pretty good feeling we'll see her again, but for now there's no reason for her to return to the fold. 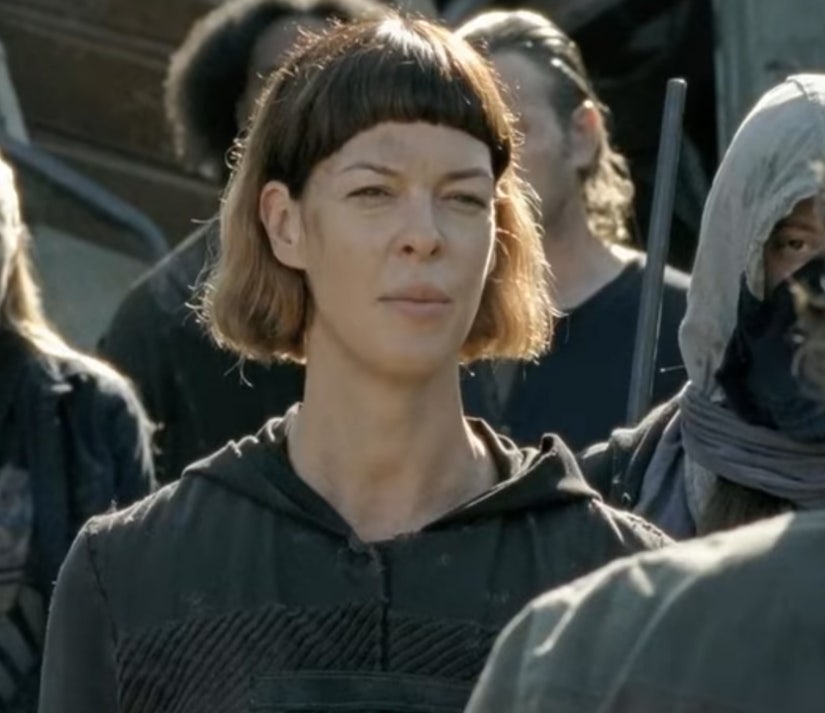 In non-Caryl news, much of the episode revolved around Rick trying to convince the new outsiders to join them in their fight against Negan and the Saviors. Sunday, we learned these battle-worn, "Mad Max"-looking survivors are led by a stoic woman named Jadis.

This is a woman who has a very unique way of speaking. She's direct, unemotional and has weird names for things like "the up up up." She's clearly smart and calculating, as we learn she simply waited for Rick and Aaron to get supplies from the boat so she could steal them, instead of trying to make a go of it herself.

"We take, we don't bother," she explained. And while she was resistant at first about joining Rick's cause, she changed her mind after he proved himself by passing the worst test ever: killing decapitating a spike-covered zombie whose brain was protected by an even spikier metal helmet. (Side question: did Winslow used to be one of them?)

They come to an arrangement, which we'll address next, but where did this woman and her followers come from?

They're such a different collection of people than we're used to seeing. They barely speak, they communicate with an odd dialect, they even have strange names. If anything, they prove how nice the Alexandrians had it and how much living in a literal trash heap can change a person.

3.) Where Will Rick Get More Guns?

As part of their deal with the outsiders, Jadis' group will help the Alexandrians if they give them half of their supplies and guns.

In a nudge-nudge moment for the audience, Rick told Tara, "You've been out further than any of us, at least you can tell us where not to look."

Tara, of course, knows exactly where they can get both weapons and backup: Oceanside.

It seems silly that the show would introduce the all-female community earlier in the season without payoff later on. While Tara didn't leave under the best of circumstances, maybe confirming they have the support of the outsiders, Alexandria and Hilltop might change the minds of the women of the beachside community. 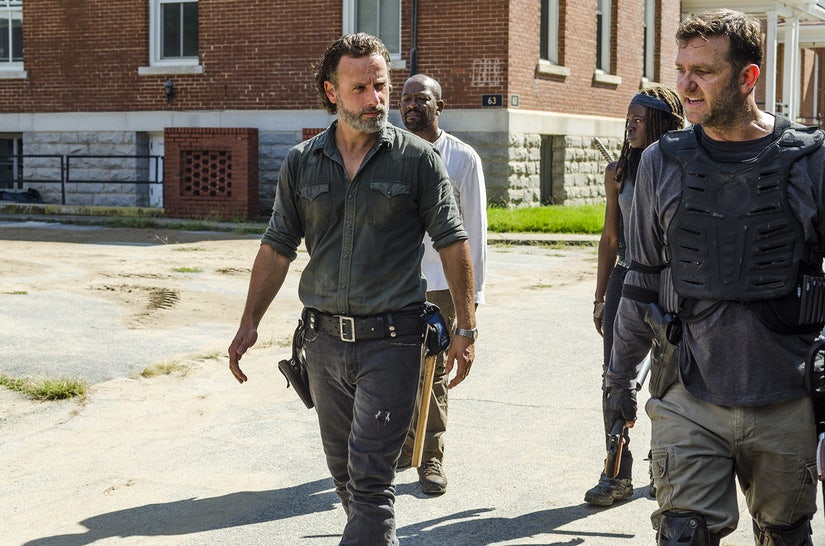 4.) Is Richard Going to Be a Problem?

Richard desperately wants to get The Kingdom to join the fight against the Saviors, but he's not making any friends in his attempts to do so.

First, he nearly botched the supply handoff between the two communities. Picking fights and talking back to the men in charge, he almost gets killed.

Then, with Daryl briefly on his side, he revealed what would have been a deadly plan for Carol. His plan to get Ezekiel to join the war: Lead the Saviors directly to Carol's house, so they'd kill her, leaving the King angry and vengeful. Thankfully, Daryl put two and two together before that happened, but it's clear Richard will go to extremes to get his way.

His motto: "What we have to do requires sacrifice one way or another."

With Daryl leaving the Kingdom, hopefully someone's keeping an eye on him. Morgan, we're looking at you!

Other Items of Note: