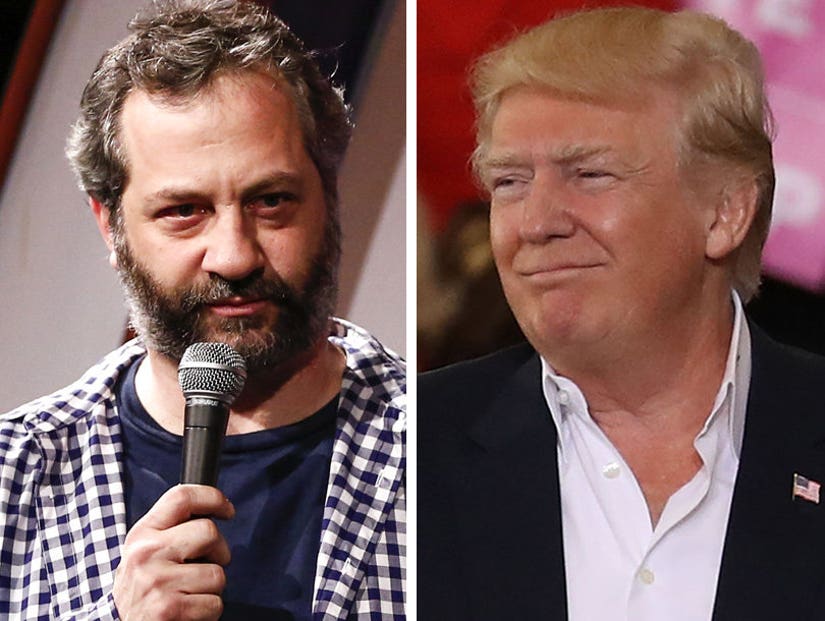 Judd Apatow became the target of outraged Trump supporters after he compared the election and presidency to sexual assault during his stand-up routine.

The writer-director-producer, known for popular comedies such as "Knocked Up," "Anchorman" and "Bridesmaids," performed at a stand-up show at the Regent Theater in Los Angeles on Saturday night to promote his new HBO series "Crashing."

Apatow spent most of his set tearing into President Trump and his family, saying that when Trump was elected, he felt like "a person about to get raped, but I didn't know how bad it would be," according to the Daily Beast.

"I feel like I've just been raped and I just don't know if I'm going to get murdered," Apatow added.

The comedian also had a good theory about Trump's 10-year-old son Barron.

“You ever see the look on [Barron's] face when Trump's talking?" Apatow said. "People are like, 'Is there something wrong with him?' No! He knows his dad's a f---ing asshole!”

His comments were picked up and circulated by Brietbart News and Piers Morgan, sparking a storm of criticism from Trump supporters and advocates for rape victims.

Even by hysterical Hollywood anti-Trump vitriol, this is disgusting. Shame on you, @JuddApatow. https://t.co/u7OcZdpOIN

.@JuddApatow U feel "raped?" U ever talk to a woman who actually has been raped? U just insulted all of them.

.@JuddApatow Why don't you go find a rape victim and tell her you know just how she feels because .... Trump. You prepuce.

I feel like I'm violated everytime I have the misfortune of seeing @JuddApatow's work, good thing I'm not a bitch who thinks it's rape

“I feel like I've just been raped."Really? In the name of comedy at @POTUS Trump's expense, @JuddApatow marginalizes both rape/rape victims.

@BreitbartNews That's a pretty insensitive thing to say @JuddApatow...shame on you. Maybe an apology to actual rape victims???

.@JuddApatow, if you KNEW what rape "felt like," you'd feel a mix of shock & shame when they did the rape kit on you. From a rape survivor.