During Sunday's episode of "The Real Housewives of Atlanta," the simmering feud between Porsha Williams and Kandi Burruss reached a fever pitch as they battled over who's done what to each other, sexually.

Kandi's same-sex proclivities have been on of Season 9's hot topics, something Burruss addressed when she confronted Porsha over talking behind her back.

"It ain't no secret, I've hooked up with a chick before. You done been with chicks before," Burruss said.

Williams responded to the allegations by dropping some more about her co-star, saying Burruss and husband Todd Tucker have other women join them in bed.

"We only had one experience where we've done that," Burruss said.

Burruss wouldn't let the allegation go without making some too -- and this is when the biggest bombshell of the night dropped.

"If I'm with my husband and we decide to hook up, that's fine," said Kandi. "But that's just like when you was kissing me in the club and told me you wanted to eat my p---- til I came."

Porsha's look of shock was priceless, as she exclaimed: "Girl, are you kidding me, that's a f---ing lie!"

In the two best lines of the night, the duo traded insults about relationships with women and hooking up with R&B singers.

"You was a freak ho," Kandi shouted. "Your house is the international house of hoes and you know it," Porsha perfectly replied.

After Kandi said that her "p---- tastes like sugar," Porsha added that her co-star wouldn't be her "type" if she was into women. The heated conversation ended with Kandi walking out on the lunch, as Williams told her and Todd to get any menage a trois participants to "sign an NDA" in the future.

After the episode, Kandi appeared on "Watch What Happens Live with Andy Cohen" to talk about the allegation she had hooked up with friend Shamea.

"No, no I did not," she told the host, "that was really foul to put her name into this whole drama. She was highly upset, she cried about it.

Kandi also talked at length about her feud with Porsha with TooFab's Brian Particelli last month, where she said their relationship is beyond repair. 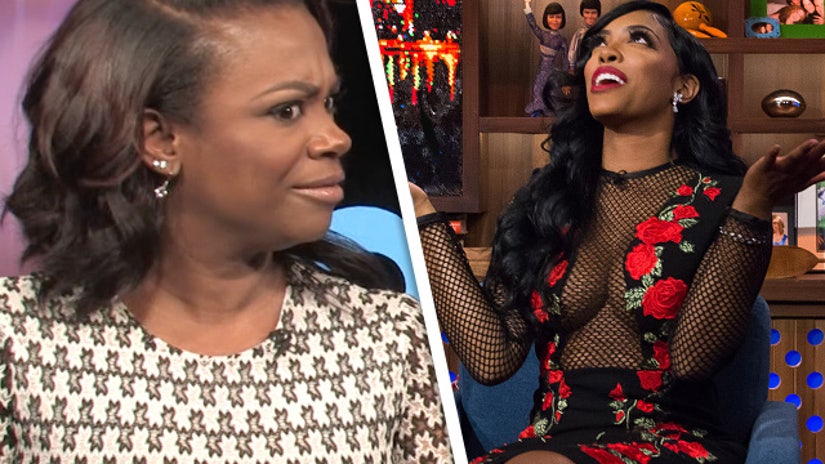