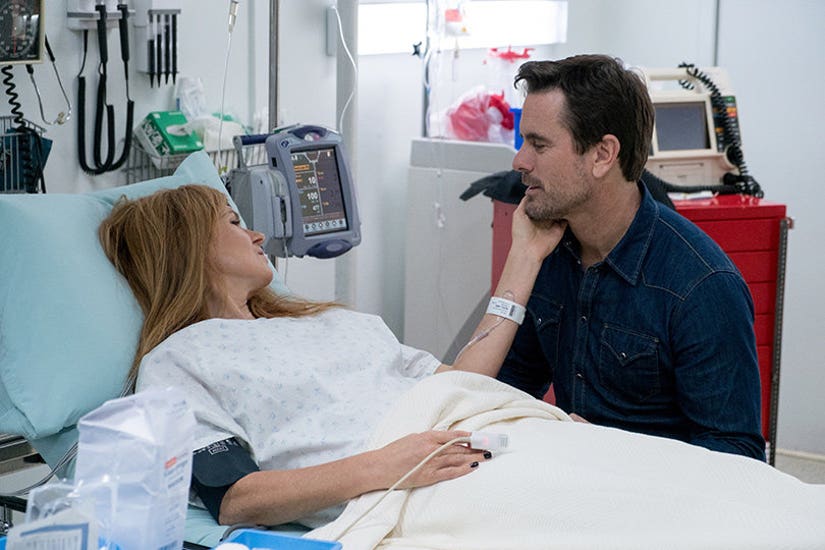 Though she told Ellen DeGeneres that she wasn't going anywhere after "Nashville" moved from ABC to CMT, her character, Rayna James, was killed off the show on Thursday night.

James succumbed to injuries she sustained at the end of last week's episode, after offering up sage advice and saying what seemed like goodbyes to most of the cast. It was definitely a shock to fans, who thought she'd pull through her second car crash.

Britton talked about her decision to leave the show in an exit interview with The Hollywood Reporter, where she said the move to CMT had nothing to do it.

"It really wasn't about being on ABC or CMT at all. None of the reasoning behind it had anything to do with network," she said, adding that she would have left if the show stayed at ABC too.

"There were a lot of different factors that played into it; it was a cumulative thing. I don't need to go into great detail about what that was but for me, it felt like the timing was important and my No. 1 priority was the show and making sure that it was done in the right way," she added.

Connie also said she'd still pop up in "at least a couple" episodes this season.

Britton posted a sentimental photo on Instagram following the episode, thanking everyone involved in the show and its fans for their support (Photo below).

"Thank you Rayna Jaymes. For your magic and your dignity. And thank you to all the creators of Rayna Jaymes, for there were many. Callie Khouri, who gave her life. Deacon, Maddie, Daphne, who shaped her as her family. Teddy, Tandy, Lamar too. Juliette, Scarlett, Bucky and the ones who crafted her into a business woman. Along with countless other compatriots and combatants. And then of course the crew of 'Nashville' who brought her to life, every crew member in every department who made Rayna live each week," she captioned the photo.

"And then there's the music. T Bone, Buddy, Tim, Frankie and all the brilliant songwriters who gave Rayna a voice. There was no music, and no Rayna, without you," she continued.

"But finally and most importantly, the fans. You made Rayna," Britton added. "You supported her and loved her and gave her inspiration just as she was able to inspire you. You were the energy source, the power behind her heart and soul and life. Rayna lived for you."

"And, from the depths of my heart, I thank you, for her and for me. It has been an honor to be a part of that creation. And as I know she would want it, the show must, and will go on. Long live Rayna Jaymes. #RIPRayna #NashvilleCMT"