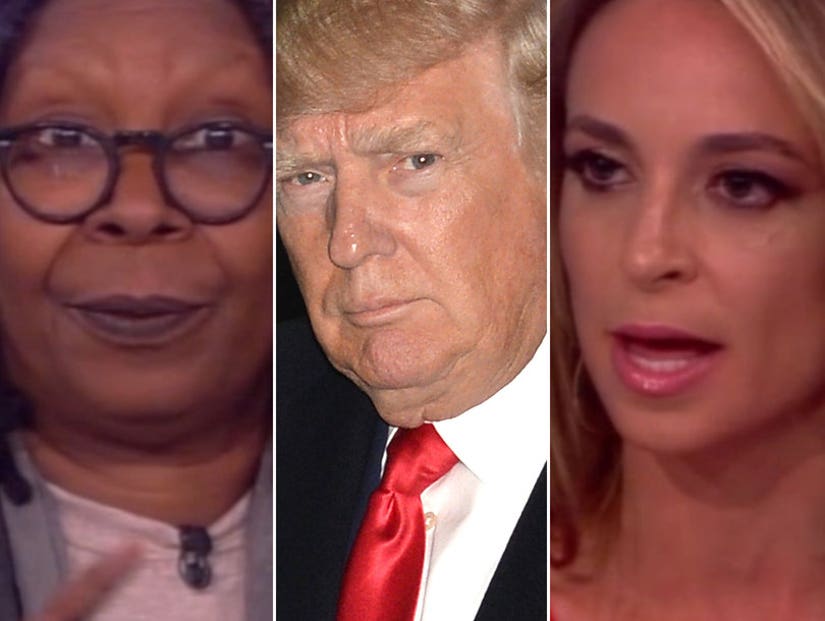 After a couple tense days at "The View," the women found common ground on one "Hot Topic" today: Donald Trump is in the wrong for rolling back protections on transgender students.

Whoopi Goldberg, Joy Behar, Sara Hines, Jedediah Bila and Sunny Hostin all went in on the President for repealing Obama's initiative for public school guidance on allowing transgender students to use the bathrooms of their choice based on their chosen gender identity.

"They're just trying to go the bathroom, y'all," said Whoopi. "They're not looking for your kids. The straight people are the people you need to be worried about."

"They are appealing to the religious right on this one," added Behar.

"I'm disappointed in Donald Trump about this," said Bila. "Because one of the things I did like about him, when there was a lot that I didn't, is that he stood up for the LGBT community. That's very important to me as a former teacher, having seen some of these students, they're in a time of great difficulty and nobody takes a minute to step inside their shoes and think about what they're going through."

"Conservatives are trying to make this about a states rights issue and wanting to empower local communities, but before you think about states rights you have to think about civil rights and constitutional rights," the conservative panelist continued. "That comes first always. The state doesn't get to say your civil rights don't matter. I'm deeply concerned."

Bila also said she didn't think Trump was "running the show" here, saying it sounded like a Jeff Sessions decision. Goldberg added, "There's a whole lot of presidents and none of them's name starts with a D."

.@WhoopiGoldberg on Pres. Trump reversing trans guidance: "They're just trying to go to the bathroom! They're not looking for your kids!" pic.twitter.com/O72wOr0Hs5

See More: Jackie Evancho Is 'Disappointed' in Trump: Let My Transgender Sister and I Enlighten You (Video)

Gavin Grimm, whose battle to use the restroom matching his gender identity is headed to the Supreme Court, also appeared on the show. Laverne Cox, who brought the spotlight to Grimm's fight during a speech at the Grammys, also phoned in to react to Trump's decision.

"This is a civil rights issue," said Cox. "It sends a message to trans youth that they are less than. The revoking of this order sends a message that our lives don't matter, that we are second class citizens and should be treated differently, stigmatized and shamed."

"When you leave decisions of civil rights up to states, for a very long time people don't have civil rights," added Grimm.

"The bottom line is, everyone should be protected under the law," said Goldberg at the end of the conversation. "We as americans have the right to be comfortable where we are, go to school how we got to school."